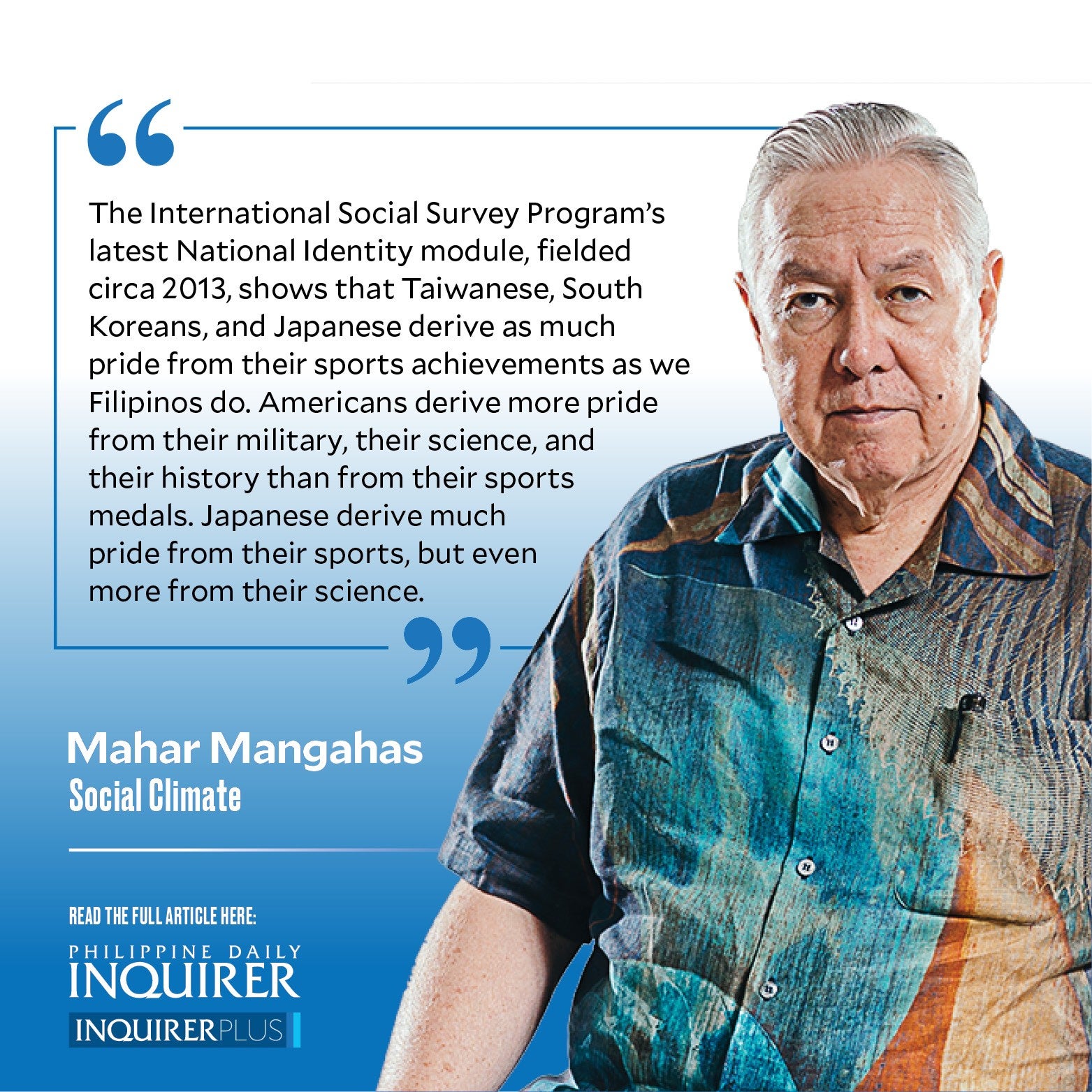 Winning the gold in an international sports competition like the Olympics is a great source of national pride in the Philippines and all over the world, with few exceptions. This has long been established by cross-country survey research.

In the International Social Survey Program’s latest National Identity module, fielded circa 2013 in 33 countries, a country’s achievements in sports proved to be its top source of national pride, among 10 sources that were probed (see table).

The ISSP is a global network, now consisting of over 40 members, that annually does a scientific national survey on a mutually agreed topic, for the express purpose of comparative research. Each member finances its own survey, and contributes its raw data to a central archive freely accessible to scientists worldwide.

Social Weather Stations became ISSP’s 12th member in 1990, and did its first ISSP survey in 1991, and thus now has 30 ISSP surveys under its belt. Our return from this is the right to participate in deciding future topics and in formulating future questionnaires. SWS has served in the general governing body and various technical committees of ISSP. Decisions are democratic: one country, one vote.

The ISSP surveys pertain to adults, meaning those of voting age. The numbers in the table are the percentages Very Proud (lubos na ipinagmamalaki) or else Somewhat Proud (medyo ipinagmamalaki) of their country with respect to a given source.

The table’s first column has the average for all 33 countries, or the “worldwide” average; the rows are in descending order of this average. Thus, in general, sports achievement is the most important source of pride (affecting 78 percent worldwide), while global political influence is the least important of them (affecting 42 percent). Filipinos are above the world-average in feeling proud of every source—except one, namely science and technology.

The 2013 ISSP survey does not specify what sports bring about national pride. It is all-inclusive, and goes far beyond Olympic events. There are more details in the 2007 ISSP survey on Leisure Time and Sports, including the relation of sports to work and other spheres of life.

Thanks to cable TV, multitudes of Filipinos have seen the play of Bata Reyes in billiards, and of Paeng Nepomuceno in bowling, and been very proud, even though these are not Olympic sports. Many remember Arianne Cerdeña’s gold medal for women’s bowling as a demonstration sport in the 1988 Seoul Olympics. In boxing, long before Manny Pacquiao, we already had Gabriel “Flash” Elorde.

And now we have Hidilyn Diaz! Mabuhay si Hidilyn!

‘No more face shields outside’ – Duterte