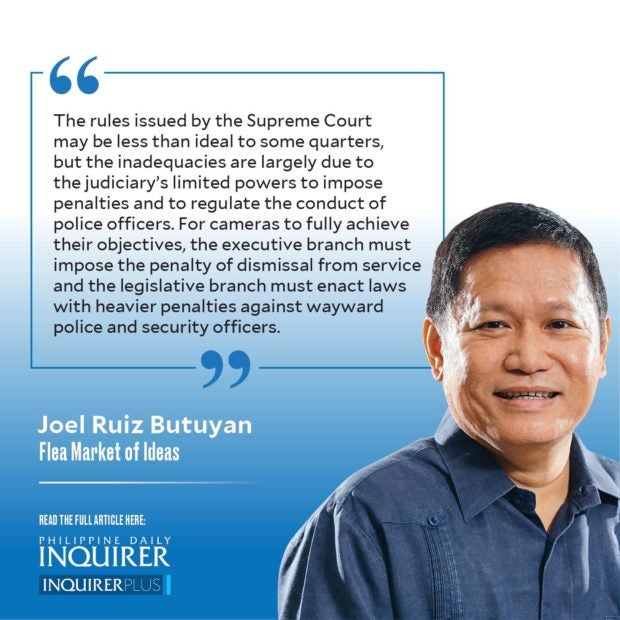 Now that policemen are required to use body-worn cameras, will it stop deaths from happening in their hands? This question is in the minds of many people when the Supreme Court recently issued the “Rules on the Use of Body-Worn Cameras in the Execution of Warrants.”

The Court issued the new rules because of the increasing incidents of suspicious deaths resulting from police operations. Since the advent of the current government, there has been a massive increase in deaths in the hands of policemen. The three different settings when these deaths happen are as follows:

1. when policemen serve court-issued search or arrest warrants; 2. during warrantless arrests, such as drug buy-bust operations, and; 3. when policemen are transporting arrested suspects. A huge majority of the fatalities are what policemen claim as drug personalities. More recently, however, deaths under these three circumstances have been increasing among political activists.

In all these deaths, the uniform explanation of policemen is that the victims fought back (“nanlaban”), forcing the cops to use their guns in self-defense. There’s overwhelming suspicion among citizens, however, that these deaths are police extrajudicial killings.

In the case of drug operation fatalities, police report that they found illegal drugs and guns around the victim’s body. In the case of leftists and activists, cops report the presence of guns and communist propaganda materials around the dead body. There’s widespread suspicion that these guns, drugs, and paraphernalia are planted evidence.

In almost all of these death incidents, there are only two witnesses: the cops and the dead victims. And since dead bodies tell no tales, the cops’ statements end up undisputed. These circumstances create an ideal setting for rogue cops to commit illegal killings.

The cameras now required by the high court will become unbiased witnesses to police operations. The hope is for the cameras to achieve three purposes: 1. they will record the events in order to confirm or contradict police narratives; 2. they will deter policemen from committing illegal acts, and; 3. they will erase public suspicion that cops commit extrajudicial killings, illegal arrests, or unlawful searches. Will the Court’s new rules achieve all these purposes?

Under the new rules, policemen are required to use cameras when they serve court-issued arrest or search warrants. The cameras must record the entire operation until the person arrested is delivered to the nearest police station. In the case of warrantless arrests, such as drug buy-bust operations, police and drug operatives are also required to use cameras but only “insofar as it is practicable.”

The rules issued by the Supreme Court may be less than ideal to some quarters, but the inadequacies are largely due to the judiciary’s limited powers to impose penalties and to regulate the conduct of police officers. For cameras to fully achieve their objectives, the executive branch must impose the penalty of dismissal from service and the legislative branch must enact laws with heavier penalties against wayward police and security officers.

When police and drug operatives perpetuate extrajudicial killings, or engage in illegal arrests and unlawful searches, they violate our sacred rights to life, liberty, and security. These three rights are at the very core of our way of life. These are the rights that were fought for with the blood and tears of our ancestors in our revolution against Spain, in our wars against the United States and Japan, and in our struggles against the Marcos dictatorship.If we remember the lives sacrificed by our heroes for us to enjoy these fundamental rights, we may yet be emboldened to fight in protection of these sacrosanct rights.

ICC case, probe vs Duterte on drug killings are doomed to fail – Palace