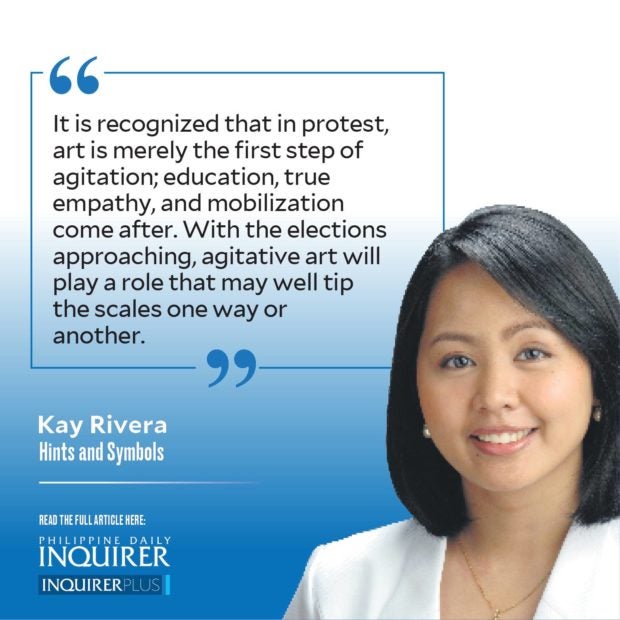 If you’ve been on social media at all this week, you will have seen references to art by Kevin Raymundo, also known as Tarantadong Kalbo. In the work “Tumindig,” a sea of figures, shaped like the President’s signature fist bump, kneel in darkness — except one. As with all art, interpretations are subjective, but the use and then subversion of the fist—well known symbol of a political affiliation—is not lost on its audience. The artist has spoken elsewhere of the need to stand up for principles despite feeling alone, or speaking into a void, as it were. Support for the art snowballed as Filipinos from different affiliations and professions contributed their own versions and created profile photos in solidarity.

With supporters, however, there are also detractors. Some retaliatory posts have received almost as much attention as the original work, including one depicting a chainsaw-wielding Inday Sara cutting down her father’s dissenters. Raymundo has been bombarded with threats, ad hominems, and various iterations of “hanggang drawing lang kayo.” The latter criticism is a discomfiting thing, too, for those who find themselves aligned with the artist’s call to stand. Beyond a change in profile photos, beyond sharing, what purpose does social media art serve in dissent and in political change? Isn’t this all as transient as a social media trend?Though this column often speaks of an admiration for political art, my only real links to it are through my father, political detainee of the Marcos regime, activist and creator of protest art, most of whose effigies and posters survive only in grainy photographs. It seems to me that my father’s work is even more anonymous and transient than Raymundo’s. No Google image search will yield his effigies or murals; the effigies themselves did not survive the protests. And yet the movement in which he engaged evidently served its purpose, and the art of that time must have done so, too.

Our political art has a rich contemporary history, its powerful distortions reflecting aspects of a troubled society. It has been said that political art may project the status quo, or portray the solution; some consider that political art is by nature oppositional, exposing ills and advocating change, otherwise it is “traitor” art or propaganda. If one considers that political art has a function, then that purpose may be to agitate; to arouse the public’s sentiments and mobilize them for change. Art, when well done, is easily understood, memorable, and affecting; as such, it is a useful vehicle for political sentiment, and is considered an indispensable part of mobilization.

Physical effigies, not unlike the fleeting trends of social media, are by nature transient. With caricature and distortion, they represent not mere persons but embody entire systems of oppression. If the purpose of political art is firstly to agitate, then effigies do the job. Political effigies burnt for this and past administrations’ state of the nation addresses have employed vivid and provocative imagery. One had the current President’s head atop a boot, apt imagery for a strong man who has threatened to stomp on all of his critics; another was the “Rudy’s cube,” a play on the Rubik’s cube, which made aspects of the President’s face interchangeable with faces of a puppy, Adolf Hitler, and the late dictator Ferdinand Marcos. Such images are designed to provoke outrage, and physical effigies go one step further in that they allow for catharsis. The destruction of effigies by burning or hitting is exactly what makes them transient. My father relates that he and his colleagues once tried to make a reusable effigy with plaster of Paris, but protesters’ emotions ran so high that no one could bear to see the effigy still standing. Like the “Tumindig” art, effigies are especially effective when we see the effect they have on other people. The effigies of old may no longer exist outside of our photo albums, but they served their purpose in the moment, propelling forward a movement that eventually lifted away the weight of a dictatorship.

It is recognized that in protest, art is merely the first step of agitation; education, true empathy, and mobilization come after. Even when profile photos change back from raised fists to couple photos and domestic scenes, even when this issue is overtaken by a million distracting others, I think the discourse around it will have served its purpose in the tradition of protest art—to agitate and discomfit the viewer, to prompt the asking of questions, and to help those who want to stand in opposition feel that they are not alone. With the elections approaching, agitative art will play a role that may well tip the scales one way or another.

Construction of Kaliwa Dam pushed through even without permits – COA