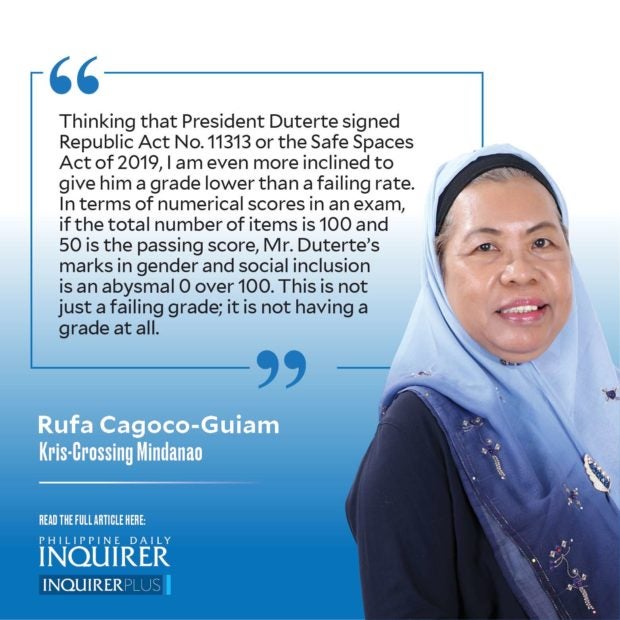 GENERAL SANTOS CITY — It is that time of the year again when the country’s president delivers the State of the Nation Address (Sona). This is President Duterte’s last Sona, which means that this is his culminating activity, or if he was enrolled in higher education, this is his “graduation.”

Because it is the culminating activity of his presidency, it is just apt that we rate or grade him for his performance in the past five years of his term.

As a retired academic, I can easily lead this grading exercise, starting with his performance in three major “courses” during his presidency. These are the following: general education, including gender and social inclusion; organization and management, with a special focus on the management of disasters (both natural and man-made); and ethics, which includes principles of good governance, like transparency and accountability; and respect for human rights.For the first course on general education, I take into account the rating that the Alliance of Concerned Teachers (ACT) has already given the President. For them, Mr. Duterte has failed miserably in addressing the educational crisis that has befallen the country.

In their statement last July 20, ACT gave Mr. Duterte a failing grade for his “consistently poor performance” in making good on his pledge to improve the state of education over the last five years of his term. ACT leaders and members accused the President of having abandoned his promise to double the salary of public school teachers. They also called out the President for his ineptness in allowing the education sector to continually face serious challenges in access and quality service delivery, especially at this time of the pandemic. In the words of Raymond Basilio, ACT secretary general: “President Duterte must be kicked out…we’ve had enough of incompetent leadership and total abandonment, especially at a time of severe and mounting crises…”Since the pandemic, almost all parts of the country have faced serious problems in the different modalities of delivering basic education services to learners, especially those in poor, marginalized communities where there are limited or no access to the internet. The “new normal” of blended learning, consisting of the use of printed modules as well as online platforms, has created a deeper chasm between learners from well-off families that can afford to maintain a monthly

internet service and those from poor, isolated communities. Parents in the latter areas are also among the country’s unlettered or least educated in the formal Philippine educational system. Moreover, this has marginalized them since in this “new normal” context, learning has to be facilitated by family members rather than an outsider in order to avoid COVID-19 infection.

In terms of gender and social inclusion, Mr. Duterte has also demonstrated that he has no respect whatsoever for women and other gender identities. His speeches have always been peppered with misogynistic remarks and invectives. The frequency of his cursing using a common cuss word alluding to a whore for a mother is unbecoming of a national leader. I wonder whose mother he is cursing—is it his own, or the mothers of every Filipino? In both cases, it does not speak well of a leader who claims to love his constituents to the point of ordering the killing of those suspected of selling illegal, mind-altering, or even deadly substances. I also wonder if these substances include the potent fentanyl, a known contraband substance in other countries, especially in the US.

Thinking that Mr. Duterte signed Republic Act No. 11313 or the Safe Spaces Act of 2019, I am even more inclined to give him a grade lower than a failing rate. In terms of numerical scores in an exam, if the total number of items is 100 and 50 is the passing score, Mr. Duterte’s marks in gender and social inclusion is an abysmal 0 over 100. This is not just a failing grade; it is not having a grade at all.