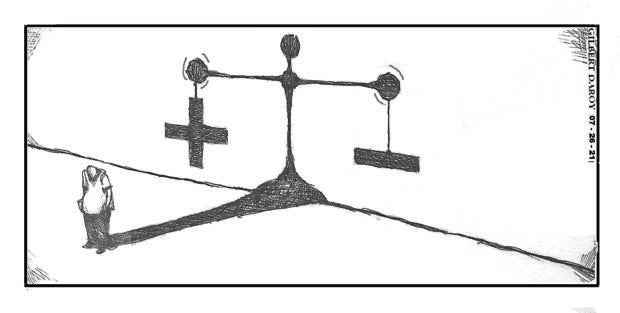 There is simply no denying the economic and social malaise the country is in right now. A rundown of the latest Ednumbers going into the last year of the Duterte administration paints a discomforting picture: The worst post-war recession that saw the economy contract by 9.5 percent in 2020 and another 4.2 percent in the first quarter this year.

A precarious 16-year high debt-to-GDP ratio of 60.4 percent as of March (international debt watchers consider as manageable a public debt equivalent to 60 percent of gross domestic product). Government debt of P11.07 trillion as of May and $97 billion in outstanding foreign borrowings as of end-March.

A staggering budget deficit of P1.37 trillion in 2020 and P566.2 billion as of the first five months of 2021, and 4.1-percent inflation last June. Add to this list the 4.14 million Filipinos or 8.7 percent of the labor force out of jobs as of April, and the 21 percent of the population living in poverty.

To be fair, the shock from the COVID-19 pandemic caused much of the present depressing economic conditions. Prior to the lockdown in March 2020, the economic picture was much healthier. In 2019, the economy grew by 5.9 percent; the debt-to-GDP ratio was at its lowest at 39.6 percent; government debt was only P7.73 trillion and foreign obligations at $83.6 billion; the budget shortfall at P660 billion; inflation at a low 1.6 percent; unemployment at just 5.1 percent; and the poverty rate had fallen to 16.6 percent.

The government can cite some economic gains, notably the much bigger infrastructure spending compared to previous administrations and the “sin” tax and corporate income tax reforms. It’s true that the ambitious “Build, build, build” program has fallen way short of the original targets by this time.

Still, 11 of the 119 so-called flagship projects, worth P126.8 billion, have been completed so far and another 29, amounting to P238.5 billion, are scheduled to be finished before the end of next year, or six months after President Duterte steps down from office. An accomplishment of less than half is, of course, better than accomplishing nothing at all. 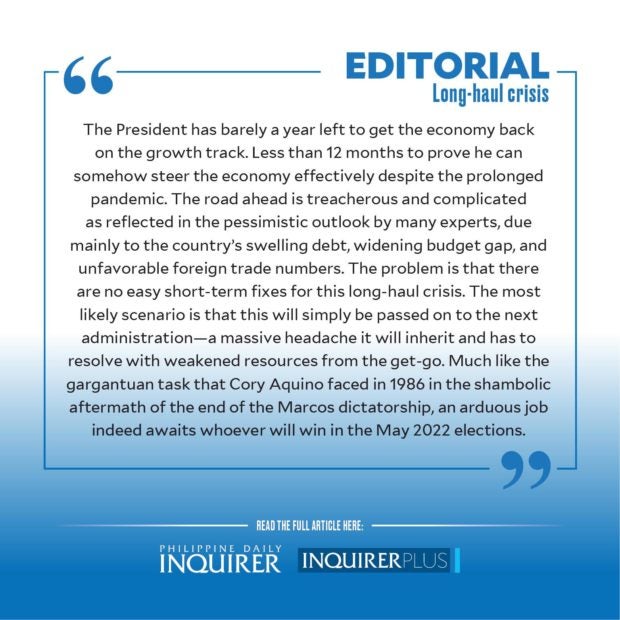 At the end of the day, however, the government must take care of other equally important indicators of the state of health of an economy. Economists and experts have already pointed to the downbeat outlook of credit rating agencies because of the country’s swelling debt, widening budget deficit, and growing current-account deficit (mostly related to surging imports and slow exports), on top of the sluggish vaccination rollout and continuing restrictions that are hampering the reopening of the economy as new and more dangerous COVID-19 variants emerge. Some observers are expecting a ratings downgrade coming for the country.

Woe to us. The impact of the pandemic on the economy has been so severe that the economic gains achieved by this administration have almost been wiped out. Mr. Duterte can argue that no country — developed or not — was left unscathed by the social and economic shocks caused by COVID-19 and point the public to the good years prior to the pandemic.

However, the people need to look at the entire six years to rightfully judge or gauge how the administration performed during its term. Every regime is thrown both good and bad years its way. The difficult periods, in fact, determine how effective a president and his team are in managing the economy. A crisis is a good test of a leader’s managerial skills. Sadly, so far, the lingering health crisis has kept the administration mostly off-balance and scrambling for control.

The President has barely a year left to get the economy back on the growth track. Less than 12 months to prove he can somehow steer the economy effectively despite the prolonged pandemic. The road ahead is treacherous and complicated as reflected in the pessimistic outlook by many experts, due mainly to the country’s swelling debt, widening budget gap, and unfavorable foreign trade numbers.

The problem is that there are no easy short-term fixes for this long-haul crisis. The most likely scenario is that this will simply be passed on to the next administration — a massive headache it will inherit and has to resolve with weakened resources from the get-go. Much like the gargantuan task that Cory Aquino faced in 1986 in the shambolic aftermath of the end of the Marcos dictatorship, an arduous job indeed awaits whoever will win in the May 2022 elections.