Elections and public trust in media 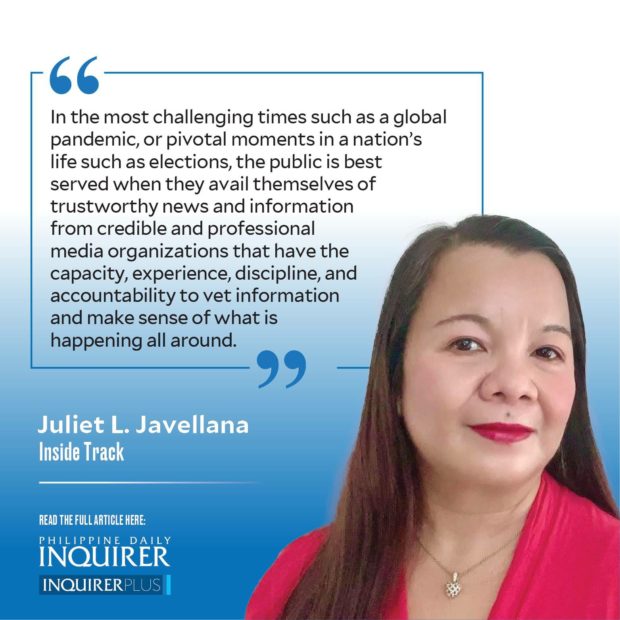 A rift within the administration party PDP-Laban, a “Tour of Luzon’’ by two veteran senators, and the First Daughter saying “Yes po’’ to running for President are early signs that the election season is once again upon us, ahead of the filing of certificates of candidacy on Oct. 1-8 for the much-anticipated national and local elections of 2022.

Many news organizations have also kicked in their preparations for this most important national event, which will largely define the course of the country’s immediate future. Many mainstream media organizations have their election battle plans down to a T, learned from decades of covering colorful and contentious Philippine elections.

The 2022 elections, however, have their own unique challenges for the media, the voters, and even the candidates.

With the pandemic still very much in our midst, and herd immunity still uncertain at this point, there are new campaigning and voting protocols to observe to protect public health and safety.

The incumbent leadership also has impacted democratic space in ways reminiscent of a not-too-distant iron rule, and has already shown its interest in getting at least one foot in the door of the next administration.

Then there is the ever-growing threat of “disinfodemic,” with fake news, disinformation, and troll propaganda available to anyone with a smartphone. Troll operators serving vested economic or political interests, or both, are expected to heighten their activities during the election, potentially affecting and swaying the more susceptible segments of the population to their ends.

These interesting times have prompted media organizations to go into introspection, and specifically to recommit themselves to the core values on which credible journalism is built—accuracy, fairness, balance—in order to restore the public trust that has been affected by the advent of fake news and threats posed by populist leaders.

In 2014, The Trust Project was launched by several news organizations around the world to build standards of transparency in the newsroom as a way of restoring public trust in journalism. The Project has grown into an international consortium of 220 news sites in 12 countries.

Locally, the Philippine Press Institute (PPI), the oldest association of national and local newspapers in the country, recently launched the second edition of its Code of Professional and Ethical Conduct in Covering Elections through a series of webinars for its member publications in Luzon, the Visayas, and Mindanao. (The Philippine Daily Inquirer is a member of the PPI).

Developed in partnership with the Asian Institute of Journalism and Communication and Unesco Jakarta and the Netherlands, the 2021 edition includes new guidelines on the use of social media and in covering elections amid the health crisis and conflict situations. (The 14-page revised Code can be accessed at https://philpressinstitute.net/).

The Code is a timely guide for journalists—and media owners—in upholding professionalism and ethical standards in pursuit of their truth-telling. Many news organizations, including the Philippine Daily Inquirer, have their internal codes of ethics and election guidelines, which generally echo the high standards required of journalists to earn public trust and fulfill their vital role in society.

A recent study of global news consumption trends offer an encouraging tone. According to the Digital News Report of the Reuters Institute for the Study of Journalism, Filipinos were more trustful of news from legitimate print and broadcast media outlets during the COVID-19 pandemic. The number of Filipinos who trust “most news most of the time’’ rose to 32 percent from 27 percent the year prior. Online news consumption grew from 85 to 87 percent, but trust in news from social media sites fell from 22 to 20 percent.

In the most challenging times such as a global pandemic, or pivotal moments in a nation’s life such as elections, the public is best served when they avail themselves of trustworthy news and information from credible and professional media organizations that have the capacity, experience, discipline, and accountability to vet information and make sense of what is happening all around.