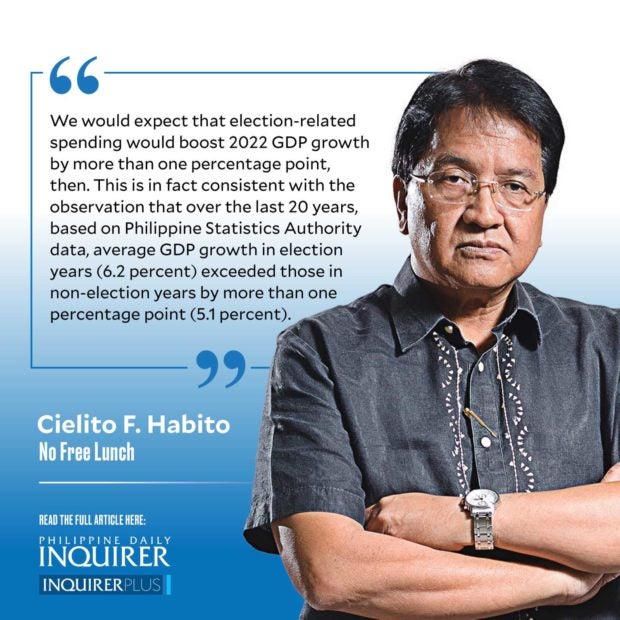 Will next year’s presidential election boost our economy’s recovery from the deepest slump seen in our part of the world as a result of the ongoing pandemic? Based on our historical experience, there appears to be reason to expect so. Will the coming election year be any different?

Why do elections perk up the economy? As everyone knows, large amounts of money go around the economy in the months leading up to the election itself. The money comes out of private bank accounts here and abroad, whether hidden or unhidden; out of government coffers (legally or not); from cartons or treasure chests stashed away in secret hideaways; and even from illegal money printing machines (watch out for those fake currency notes going around in the months ahead). All that money traditionally buys campaign posters, tarps, and streamers; radio, TV, and newspaper ads; transport services, hotel, and other lodging accommodations for candidates and their campaign workers; food and meals consumed and given away during the campaign; T-shirts, caps, fans, pens, and other accessories bearing candidates’ names; show business personalities’ talent fees; and many more. This time around, a prominent item that would figure in the campaign budgets would be social media campaigns, including money to pay “troll armies” and hackers who could manufacture and disseminate fake news to favor or discredit certain candidates.

There’s also the unusual surge in infrastructure spending that tends to precede elections up until the election ban takes effect (although that hasn’t necessarily stopped people). With these come the prominent billboards bearing the names of generous politicians who have “gifted” us with these vital facilities that they had always owed us in the first place.

How much additional spending can we reasonably expect to be associated with the elections? The last systematic attempt I know of to estimate this was done back in 2010 based on 2007 data, when staff at the National Economic and Development Authority came up with the figure of P13.5 billion, equivalent to 0.34 percent of overall GDP at the time. We can do our own updated rough estimate based on the current mandated spending limit of

P3 per voter — which Congress wishes to raise to P50 — and the recent report from the Commission on Elections that now counts more than 60 million registered voters. Each national candidate is thus allowed to spend P180 million (up to P3 billion under the proposed law). If we assume 35 significant national candidates (for president, vice president, and senators), this adds up to P6.3 billion (possibly P105 billion under proposed new limits).

For the rest of the roughly 60,000 candidates running at all levels, I’d roughly estimate another P12 billion, yielding a rough total of about P18.3 billion in overall campaign spending. Adding Comelec’s proposed budget of about P15 billion gives us P33.3 billion. If we assume a conservative P18 billion in extraordinary infrastructure spending by national and local governments, our total figure would come up to about P50 billion in additional spending directly attributable to elections. Using a rough and probably conservative multiplier of 5 to account for the usual multiplier effect as that direct spending leads to subsequent cycles of income and spending in the economy, total GDP impact would come up to P250 billion, which is about 1.4 percent of our 2020 nominal GDP of P18 trillion. We would expect that election-related spending would boost 2022 GDP growth by more than one percentage point, then.

This is in fact consistent with the observation that over the last 20 years, based on Philippine Statistics Authority data, average GDP growth in election years (6.2 percent) exceeded those in non-election years by more than one percentage point (5.1 percent). However, there is good reason to believe that election campaign spending would take on a substantially different form at this time of pandemic where face-to-face campaigning will have to be dramatically curtailed. As the battleground shifts more to social media (apart from the traditional mass media), the benefits from such spending could well be more narrowly spread.