The Philippine National Police has announced that it considers the recent death of 19-year-old Jonash Bondoc, a cadet at the Philippine Merchant Marine Academy (PMMA), a closed case after it filed homicide charges against another cadet who admitted to having punched Bondoc as a “farewell gesture.”

But Bondoc’s family is crying for justice and has called for an “independent and impartial” investigation, saying he was a victim of hazing. Bondoc’s sister Glaiza cited a medico-legal report from the police regional crime laboratory in Zambales stating he had bruises on many parts of his body and had died from a blunt traumatic injury to the head.

“The autopsy report clearly says that my brother was mauled to death,” said Glaiza.

Bondoc, a cadet fourth class, was found dead in the PMMA barracks in San Narciso, Zambales on July 6. Cadet third class Jomel Gloria admitted that he had “unintentionally” punched Bondoc twice in the chest as a gesture of affection and farewell as the latter was set to leave for his hometown for a break.

“Pabaon ko lang ito, lambing lang,’’ Gloria was quoted by Zambales police provincial director Police Col. Romano Cardiño as saying. Following Gloria’s admission, he was removed from the academy, charged with homicide, and is now out on bail. Per a GMA News report citing statements by PMMA chief of staff of the superintendent Chuck dela Cruz on the TV program Unang Balita, “the academy’s investigation as well as the Prosecutor already ruled out hazing in the incident.” Case closed? And yet there are more questions that beg to be answered in this case. If Bondoc was merely punched playfully in the chest, as Gloria claimed, how come the medico-legal report attributes his death to blunt traumatic injury to the head and notes bruises all over his body? 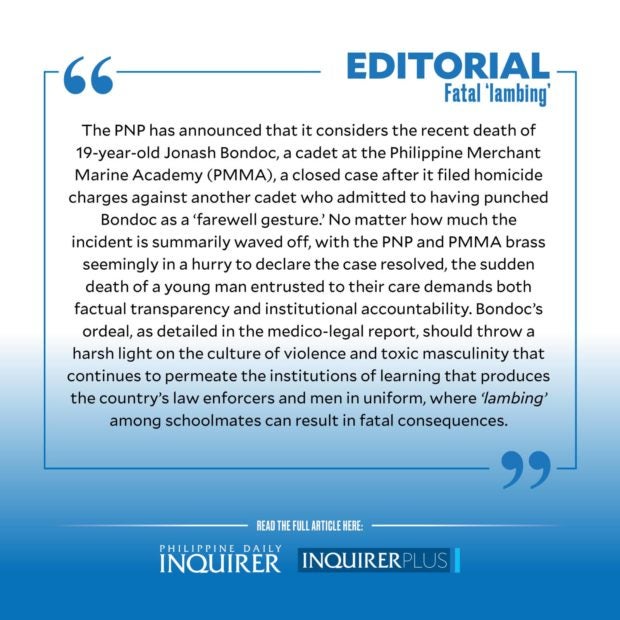 If reports are true, it was not the first time Gloria had punched another cadet. Has the academy delved into that more fully? No matter how much the incident is summarily waved off, with the PNP and PMMA brass seemingly in a hurry to declare the case resolved, the sudden death of a young man entrusted to their care demands both factual transparency and institutional accountability. Bondoc’s ordeal, as detailed in the medico-legal report, should throw a harsh light on the culture of violence and toxic masculinity that continues to permeate the institutions of learning that produces the country’s law enforcers and men in uniform, where “lambing” among schoolmates can result in fatal consequences.

Agusan del Norte Rep. Lawrence Fortun has urged the National Bureau of Investigation and the Commission on Higher Education to conduct a thorough investigation into the death of Bondoc, and root out why cruel acts of hazing continue to this day despite laws that explicitly ban the practice.

Bondoc’s case recalls the death of Darwin Dormitorio, a cadet fourth class at the Philippine Military Academy (PMA) who died on Sept. 17, 2019, after being subjected to horrific hazing for a month by upperclassmen. Several cadets and three doctors are now on the dock for hazing, murder, and physical injuries, but PMA officials who resigned following the incident were cleared of responsibility for Dormitorio’s death, which only added to the agony felt by the bereaved family.

As if to add insult to injury, Maj. Gen. Bartolome Bacarro, the PMA commandant when the hazing incident occurred, was recently appointed chief of the Philippine Army’s Southern Luzon Command, prompting Dormitorio’s father, Lt. Col. William Dormitorio, to oppose this appointment before the Commission on Appointments (CA).

“My family is only after fair and correct justice for my son, 4CL Dormitorio, and we hope that our pledge to lobby against hazing would put a stop to all these meaningless deaths because we do not wish other families to go through the same pain our family had to endure,’’ the elder Dormitorio said in a letter to the CA.

Authorities must take heed of the grieving families’ call for a definitive end to the culture of hazing, which persists in the institutions already mandated by law to prevent it from happening. So many young Filipino lives have been snuffed out unnecessarily and violently as this dark tradition has been allowed to live on in the places—funded by taxpayer money—where the future protectors of the citizenry are trained and molded.

Families send their children to the PMA, the PMMA, or the Philippine National Police Academy in hopes that they will be raised into fine soldiers or law enforcers who would serve their country with honor and distinction, only for some of these children to end up in the most brutal circumstances—mauled, beaten, dead. As the elder Dormitorio said, no family should have to go through the unbearable pain of losing their children in institutions where they are supposed to be safe.