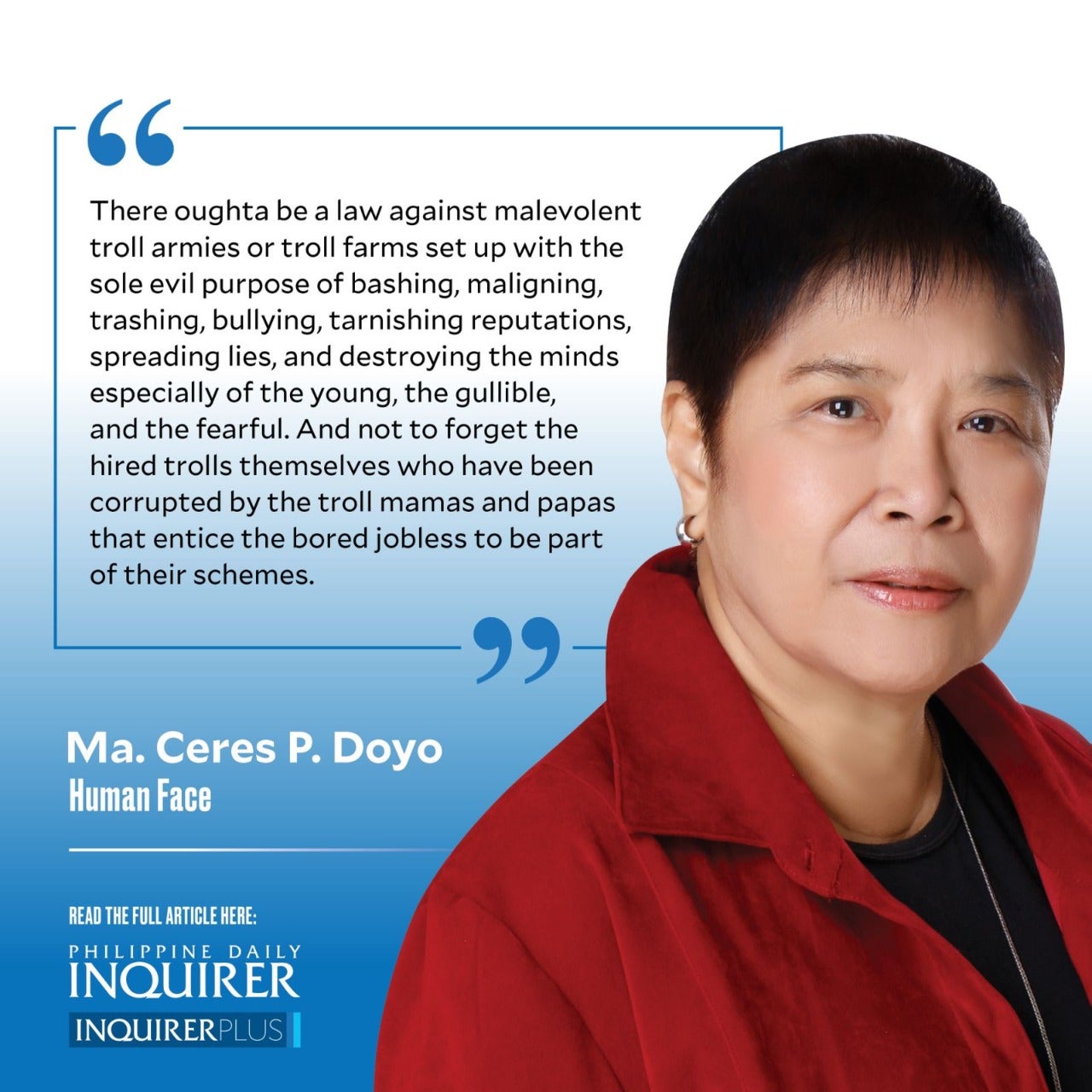 There oughta be a law against malevolent troll armies or troll farms set up with the sole evil purpose of bashing, maligning, trashing, bullying, tarnishing reputations, spreading lies, and destroying the minds especially of the young, the gullible, and the fearful. And not to forget the hired trolls themselves who have been corrupted by the troll mamas and papas that entice the bored jobless to be part of their schemes.

But as the saying goes, “May araw din kayo.” Your day of reckoning will come.

With the national elections less than a year away, cyber trolls are coming out of their musty caves to sell themselves to the highest bidder, or to put it the other way around, headhunters must be on the prowl for fresh hires who can promise the most damage against their opponents’ camp. And against media persons as well who are standing in the way of wrongdoings.

Many years ago, I had a small troll doll hanging inside my car. That was when the word trolls referred to dwarves or giants in Scandinavian folklore. They inhabited caves or hills and possessed magical powers. For those who fish, the verb troll means “to pull a baited line through the water behind a boat.”

Fast forward and we now have the so-called internet troll or “person who posts inflammatory, insincere, digressive, extraneous, or off-topic message in an online community, with the intent of provoking readers into displaying emotional responses, or manipulating others’ perception.”

Circulating recently on Facebook was “How to Starve a Troll.” It is a way of dealing with these hired pests so that they earn little or nothing from what they do because their annoying tactics are ignored and therefore rendered useless. They have little to show to their hirers who expect results in the form of comments, replies, and annoyance on the part of their targets, the overall result being to turn the tide toward their big bosses or cause harm to those with better principles.

I do not know how the hired trolls’ performance is monitored and rated by their supervisors and funders—politicians, of course—but techies must know how this is done. The good thing is that victims and targets can get back at the trolls by starving them. Here’s how:

Do not comment. The troll will write abrasive and shocking posts. Your simple comment like “Stupid you” means money for them. Remember, when you react, they earn.

If you do comment, delete after the troll replies. The troll will be waiting for you to answer and bait you into an argument. Waste the troll’s time by deleting your comments so he does not get paid for it.

In a separate comment, encourage other people to block the troll. This will earn the troll a demerit.

Alert other people in the group about the trolls you have blocked.

Unfollow all troll queen blogs. Do not share. You do not need to read them. You’d be happier if you don’t.

It ends with “Let’s take back the internet.”

Malevolent trolling can spread hate speech online which can be a prelude to real-life violence. In her Washington Post article, Rachel Hatzipanagos said: “White-supremacist groups use social media as a tool to distribute their message, where they can incubate hate online and allow it to spread. But when their rhetoric reaches certain people, the online messages can turn into real-life violence.” She cited cases in the US.

Hereabouts we have Red-taggers, not necessarily trolls only, but also government officials whose words and lists have caused the deaths of the tagged. It is therefore not far-fetched for the trolls to be unwittingly preparing the ground for gruesome situations or hate crimes.

Just as worrisome is the online butchering of the truth, the tarnishing of individuals who aspire to serve their country well. If trolls use words to kill off the truth, starving them one way by silence can kill off or disable these menace on cyberspace.