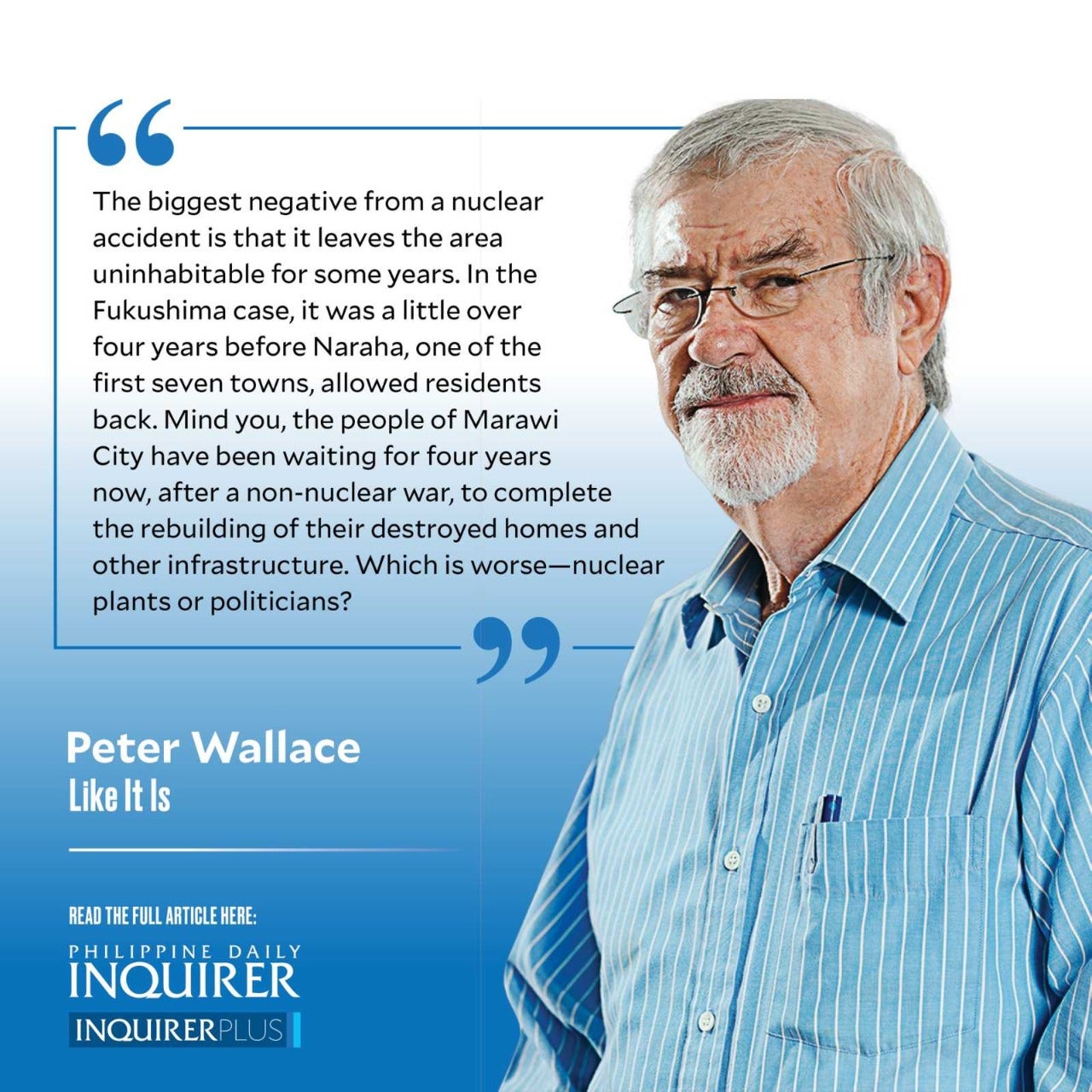 No, no, you cry, nuclear power is not safe. We risk sudden, horrendous death. In a word, BS. Excluding 46 people who died as a result of the Chernobyl accident—Chernobyl was a disaster designed to happen—the horror of Fukushima killed one person as a result of radiation exposure, while some 2,000 died due to evacuation stress and interrupted medical care. That’s around 2,000 deaths in the last 50 years.

To compare, some 1.35 million people die from road traffic accidents every year. In those 50 years, 68 million people died on the roads. If you want to ban anything because of its risk to humanity, it’s pretty obvious what that should be. Recent research from Harvard University showed that in 2018 alone, around 8 million people died from fossil fuel pollution. Nuclear is comparable to solar and wind in safety. Nuclear plants are safe.

The biggest negative from a nuclear accident is that it leaves the area uninhabitable for some years. In the Fukushima case, it was a little over four years before Naraha, one of the first seven towns, allowed residents back. Mind you, the people of Marawi City have been waiting for four years now, after a non-nuclear war, to complete the rebuilding of their destroyed homes and other infrastructure. Which is worse—nuclear plants or politicians?

The second biggest concern is security of nuclear waste storage. While deep burial of the waste is still regarded as the best solution, there are two technologies being developed that can address the issue. One is the creation of advanced fast neutron reactors that would use the waste as fuel, while the second is transmutation, which will reduce the radiotoxicity of the waste through the use of lasers. So it’s a concern, but one that can be handled.

In July 2020, President Duterte formed the Nuclear Energy Program Inter-Agency Committee, chaired by the Department of Energy (DOE), to conduct a professional study “for the adoption of a national position on a nuclear energy program.” This included looking into the viability of utilizing the Bataan Nuclear Power Plant (BNPP). The study was submitted to the President late last year and is awaiting his decision. But the Department of Science and Technology-Philippine Nuclear Research Institute did say in February that the report was positive for the reopening of the BNPP. It recommended including nuclear power as a key component of our energy mix, and as a viable component for sustained economic development.

The expressed concern for the BNPP is that it’s claimed to be on an earthquake fault line. But according to Phivolcs, there is no fault underneath the BNPP. Even if there were, the plant is designed to withstand an Intensity 8 earthquake. Whether the Bataan nuclear plant should be opened or not I don’t know; what I do know is that independent experts have analyzed it. Whatever they’ve decided on, I’ll accept. The President needs to approve and release that report, because we need more power generation with urgency.

Whether we recommission the BNPP or not, we should be building nuclear plants.

I had a hard time determining the cost of nuclear power versus the others, because it’s not just the generating cost, but also amortization of the capex, and cost when the source is offline, etc. But, overall, it would appear to be a cost we can afford.

Where I do have concerns is maintenance—something that is poorly done in the Philippines. A nuclear plant needs scrupulous attention to every detail of running a plant safely. But it can be done, as Shell has demonstrated in its Malampaya offshore rig. The project would need ruthless, detail-minded leadership to enforce the strict discipline a nuclear plant must have.

Realistically, it is going to take some years before we can have electricity from a nuclear plant in our homes. But I see it as a necessary part of our future. Energy Secretary Alfonso Cusi has recognized this, and a review of his energy plan shows this is the direction being taken—a shift to a range of clean, reliable energy in a practical manner.

The future of the world’s energy needs will be founded on renewable sources, and that includes nuclear power. Fossil fuel-powered plants will become themselves fossils. Nuclear power is reliable, it’s clean, it’s able to run continuously for decades. Its fuel source is inexhaustible, and can be disposed of safely or reused. And it’s safe. Nuclear power is an obvious choice to add to the mix for clean, low-cost, base-load power.