Waking up, working out, and how it all works out | Inquirer Opinion

Waking up, working out, and how it all works out 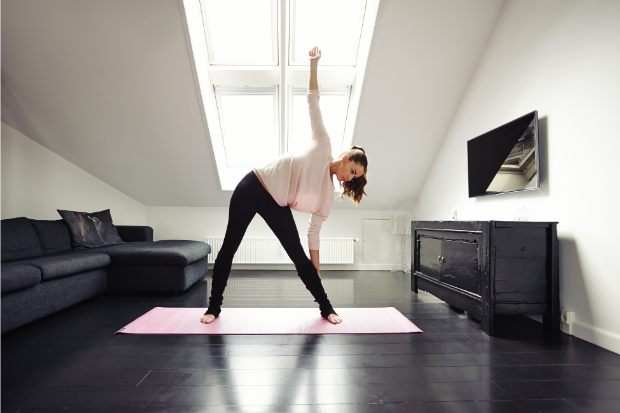 I have always struggled with my weight and how my body looked for most of my adult life, which is funny because I was skinny and lanky growing up. So skinny and lanky that some relatives thought I was malnourished or was suffering from something. I remember my mom struggling to figure out what to feed me because I was not gaining any weight.

Little did we know I would be struggling with my weight for different reasons as an adult. I disliked how my body looked. I only saw myself as chubby, someone with thick thighs, and someone who was too short for her built. Because of these imperfections, I did not like how clothes looked on me. Dressing up in the morning for work was always a struggle, and it often ended in me being in a bad mood, or worse, throwing a tantrum. I was unforgiving of my body. I had very little confidence about my appearance, and it greatly affected my attitude.

I was particularly at my heaviest after I left teaching. I was suddenly off my twelve-year daily routine of always being on the go, constantly moving, with idle moments almost to none. It was only after seeing my picture taken during a get-together with friends when I realized how much weight I had put on.

I almost immediately got into exercising, with a preference for being outdoors rather than in the gym and curbing what I ate rather than jumping onto a drastic diet. I managed to shed the extra weight for some time. However, I went on and off after that, so the struggle to both keep off the excess pounds and like my body only continued.

It took me years to finally embrace my uniqueness and be more accepting of my body although I don’t remember when exactly it happened, and how I came into the realization. Maybe the acceptance and realization came with age, maturity, and some wisdom, but I finally had it in me to accept that not all bodies are the same, that I can still look good and more importantly feel good in clothes, no matter my size, if I feel and look healthy.

Unfortunately, things took quite a turn last year. While most tried to make a better version of themselves during the various lockdowns, trying out new fitness trends (Keto dieting, jump rope routines, etc.), I kept myself occupied with work (and the stress that came with it), learning a new skill/hobby (sketching and re-learning how to play the piano), devouring one K-drama after another, and befriending the stray cats that visited our house (I have named each one: Bangtan, Scarface, and Cat-Cat). Not that I regret any of it or there was anything wrong about it, but I came to a point where I wished I also put in some effort in keeping fit. We all had (have) our ways of dealing with the chaos around us. All I had in mind was to survive with the people I love, neglecting the fact that taking extra vitamins, the more than usual use of disinfectants, and following minimum safety and health protocols won’t cut it if your mind and body are not strong enough. Admittedly, I did let myself go a bit.

A year after allowing myself to just be left me feeling more sluggish, less agile, and unmotivated. I constantly had back pains and migraine attacks, too. More than looking good, I now realized and a bit late in the game, how important it is for me to get back in shape, and how it all does not begin and end with just taking vitamins and being mindful of precautions.

About a month ago, I resolved to run and take long walks again. However, I was not entirely sure how I’d hold up with a face mask and face shield, so I thought it best to do something indoors for the meantime. I scoured through YouTube and gathered some workouts for beginners, those that will help me lose the unnecessary bulge and allow me to keep moving and active, and since I love dancing, I also threw in a few dance routines. Of course, I just had to start with a BTS playlist.

For the first time in more than a year of working from home, I woke up early, not for work, not to do chores, and not because my migraine pushed me out of the bed again. I have been waking up early to exercise.

I am not going to fool myself and say that the first few days had been great, because they were not. They were brutal, and my body made sure to make me feel what I should not have neglected in the first place. I was sore all over for the first couple of days. My legs, thighs, and arms gave up several times and throbbed from being shaken to its core.

However, it was fun searching and selecting new videos to follow, especially when the workouts became repetitive. I tried HIIT and enjoyed it. Those workouts kicked my butt. To say that some of the routines were extremely difficult is an understatement. Weirdly though, it was fun and challenging, so even if I looked like a doofus doing each routine, I kept at it.

And I am keeping at it. What I find surprisingly amusing is that despite the difficulties and most of the time not being able to finish the routines, or looking foolish while I do them, I always look forward to each morning workout, especially when some noticeable changes start to show.

I have observed that I can now more comfortably execute the routines that were a challenge for me at the beginning. It is now easier for me to sustain my strength as I do so. I feel much lighter. I also noticed how I am no longer out of breath going four flights up to our office. I now move much quicker and a bit stronger.

My waistline has considerably gotten smaller. Pre-working out, I was at 32 inches. More than a month after getting into this routine, I am now down to 26 inches, something I never thought would ever happen again.

When it comes to food, as with most things, I have always believed in taking anything in moderation. I never believed in depriving oneself, and I have never gone on any kind of dieting. I eat what I like and try not to over-indulge. However, there are times when that is easier said than done, and yes, I grab onto that extra rice when I can. One noticeable change I observed was that despite still eating what I like, my food portions have gotten lesser. When I used to have two or three cups of rice to go with my favorite dish of Kare-kare, I now get full of only half a cup. I have also always been a snack-er. When I was younger, I could live off snacks and would not even complain about it. After working out again, I am proud to note that I have not snacked on chips for over a month. I still crave for snacks every now and then, but I have substituted snacks with nuts and fruits instead. I still drink soda, but I limit it to two glasses a day, and load it up with ice cubes. I did not do anything drastic or unrealistic when it came to my food intake. I did what I could do, which is to simply lessen, with the hope that eventually I will be able stay away from junk food for good.

An even more important realization is that more than the physical changes, I am much delighted at how my daily routine and attitude towards things have changed.

I used to start each day with work, more particularly when I started working from home, which meant that whatever work stress I encountered first thing in the morning set the mood for the entire day. There had been countless days like that, which made me dislike work and having to deal with it.

Nowadays, I wake up earlier than usual and begin with gratitude and my workout, and while I work out, I reflect. It is not your usual combination, but so far, it has been doing wonders for me. Of course, I still get stressed about work, but I face it differently this time. I have learned to take a step back first, scan what needs to be dealt with, and deal with it with a more open mind (and heart).

Indeed, things have an amusing way of presenting itself. I realized that the effort I have been putting in waking up early to exercise and the effort in trying to execute and complete workout routines are an effort to start my days right through daily devotionals and reflection, being grateful for what I have and what I can still do, for myself and for those around me.

What started out as a challenge to get my body back in shape has now become more of a holistic challenge to better take care of myself, come out of this better, and in turn, take care of those around me better.

Doreen M. Gutierrez is a language editor from Quezon City. She enjoys going on long walks and rides out of town, and relies on books, old films, new wave music and BTS to chase the blues away. She believes it’s never too late to make a better version of ourselves.