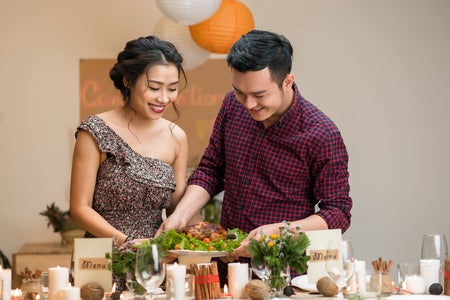 “Do you really like eating this? Gusto mo ba talaga ‘yung lasa?” I asked while I dipped the sizzling beef slice into the cheese sauce.

“Hmmm, sakto lang,” he said. “I just go here because I like seeing you happy.”

It has been like this for eight years. Over that course, I often have the final say in everything – what we would eat, what you would buy, where we would go, when we would meet. Almost all the whys and hows of our relationship are based on him waiting for me to decide on things. I sometimes give him answers but most of the time, I keep him guessing. And I never even heard him complain, not once, never.

I have spent about one-third of my life with him yet my interest in him never falters. I crave for the subtlety of his love, how he manages to be calm in the pettiest of my misfits, and still offer me the upper hand. For eight years, he has permeated my life with endless I love yous and I miss yous, and I sometimes ponder how on Earth was I able to keep a man who actually wanted to be kept.

I met him when I was a sophomore in college. We came from the same province, studied in the same area in high school, lived in the same Manila street, but we never knew each other until that one Friday, night in a bus station. He said he saw me there, and right then and there he knew that I was the one for him. Koi No Yokan, he said. Meanwhile, I have no idea that he existed.

Eight years, and I’m still clueless on how we were able to survive the lows and blows of a relationship between a former womanizer and an eccentric Bulakeña. Life truly offers miracles. We’ve been together through hunger and satiety, drunken nights and carnal mornings, jobless summers and unending work deadlines, YM messages and Telegram stickers, and here we are still, still as consumed with each other as ever. My time with him has taught me that affection manifests through different forms; I offer him understanding, he gives me protection.

Friends usually say that I am lucky to have met someone like him. They often ask me for advice on love and loss, but I honestly suck at giving those. I often tell them, “I don’t do all the work.”

I can count on my fingers the times when we fought with each other. But he is never under me. He speaks his mind when needed, grounds me when I’m being too pushy, and he demands calmly when he thinks he needs something from me.

We are equal in this relationship: giving and taking what we both can from each other. When one is empty, the other one pours, and when one is tired, the other one revitalizes. We are each other’s muses in our own fields – he in my writing, and I in his photos.

I once looked at the food he ordered from one of our favorite fast food restaurants. I saw that he ordered the spicy version of his staple.

“I didn’t know you like spicy fried chicken,” I said.

“I used to order the original one ‘cause I know you liked it,” he said. “Lagi ko kasing binibigay sa ’yo ‘yung balat, don’t you remember?”

My dear, thank you for the little things.

Elise Gutierrez from Guiguinto, Bulacan works as a writer for a television network in Quezon City. Whenever she has free time, she usually writes poems, binge-watches TV series and eats samgyeopsal. She considers herself “a modern hopeless romantic.” She says, “I like basking in the love given to me by other people so I can give the same love twice as much.”