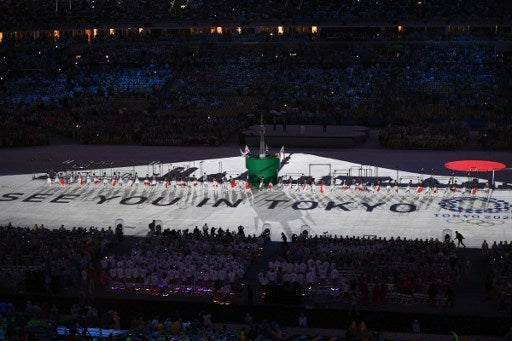 A projection onto the playing field announces the Tokyo 2020 Winter Olympic Games during the closing ceremony of the Rio 2016 Olympic Games at the Maracana stadium in Rio de Janeiro on August 21, 2016. / AFP PHOTO / Eric FEFERBERG

With the Rio Olympics over and done with, it’s high time thoughts of Tokyo drifted into the consciousness of Philippine sports officials so they can think in earnest of preparations for the next edition of the Summer Games.

Four years is too short a time to build a medal contender from scratch, but delaying the process to bask in Hidilyn Diaz’s silver-medal glory is wasting precious time. Diaz’s historic Olympic moment should be celebrated by the weightlifter, her team, her family, and, yes, long-suffering Filipino sports fans now able to heave a sigh of relief at her feat.

For sports officials, the work to ensure that the Philippines doesn’t slip back to an empty haul in Tokyo should begin. And it begins with Diaz.

The Philippine Sports Commission has taken the early initiative to plot Diaz’s route to more Olympic glory. It promises to surround the petite athlete with an able and regular support system that includes a coach, a nutritionist and a conditioning trainer who will keep her in shape and in sharp form for the next four years. The PSC wants this team to be with her at every international competition she will take part in on the road to Tokyo.

The PSC has thrown in a caveat: This team will be available to Diaz as long as she resists the lure of show biz. That her newfound fame and fortune will result in talent managers making a beeline for her camp is predictable and not without basis. Before her, after all, the last Filipino athlete to win an Olympic medal was boxer Onyok Velasco, who bagged a silver in Atlanta 1996. Velasco’s sudden fame eventually led to a show biz career, and he quit boxing altogether.

But the mission to ensure triumph in Tokyo doesn’t have to end with Diaz. For years Philippine sports officials have failed to come up with a credible sporting program that begins with talent identification at the grassroots and ends with elite performers who can hold their own on the world stage. Diaz’s case is a rare one, and even then shortsighted officials couldn’t see the potential in her and nearly ran her off the sport with their apathy and ignorance.

Diaz has begun seeding talents for her sport by laying the foundation for a weightlifting academy that she will personally oversee. Marestella Torres-Sunang, whose long jump career has reached its end, also announced plans to personally train jumpers.

In fact it is sports leaders who should be undertaking these two women’s initiatives. And they should desist from cooking up programs that serve to mask their mediocrity. There should be a constant scrutiny of the internal processes conducted in the development of these programs. Boxing provides an apt cautionary tale. The national boxing association had a seemingly solid program that began with national championships and ended with two slots to Rio. Boxing was touted as the Philippines’ best medal hope, but it came up empty. What happened? At what point in the blueprint did the process fail the program? These questions should be answered so that the roadmap to Tokyo can be firmed up as soon as possible.

Countries with smaller populations than ours have won gold medals in the Olympics. Our Southeast Asian neighbors managed to snap gold droughts in Rio. A perfect example is Singapore, which invested in sports in which it is traditionally competitive and was rewarded with its first Olympic gold courtesy of swimmer Joseph Schooling.

Our sports leaders should look to do the same. The inordinate passion for basketball, or the rekindled love affair with volleyball, or even the niche fascination of football should not preclude support for other sports. Having private sponsors pour money into these sports, which will never produce an Olympic gold for the Philippines in the next lifetime or four, will free the national sports budget to focus on sports that can bring home the bacon.

It starts with Diaz. A medal in Tokyo will make her the most successful Filipino Olympian in history—a possibility that should not be lost on sports officials.

But it doesn’t end with her. There are Olympic-caliber talents out there waiting to be found. Sports officials should provide the search infrastructure. A doable, realistic, exhaustive and inclusive program should flush those talents into the open. And that program can only be crafted and run if our officials finally do away with the preening and turf-marking politics that has long shackled Philippine sports.

Rio is done. It’s time to begin the work for Tokyo.

Read Next
Honor
EDITORS' PICK
PNP: Checkpoints back in MECQ areas
BREAKING: 3,226 latest COVID-19 cases bring PH’s total to 106,330
Smart 5G goes live
A gem of a residence in the new normal
Water remains our saving grace right now
Been there, done that but what’s the difference between MECQ and GCQ?
MOST READ
MECQ guidelines in infographics
Doctors group to Duterte: ‘There was never a call for a revolt’
MECQ in NCR, other areas: Mass transportation suspended, quarantine pass required anew
Corruption during pandemic? Don’t blame it all on Duterte – Pacquiao
Don't miss out on the latest news and information.

Corruption during pandemic? Don’t blame it all on Duterte – Pacquiao