What a Trump win would mean to Filipinos | Inquirer Opinion

What a Trump win would mean to Filipinos 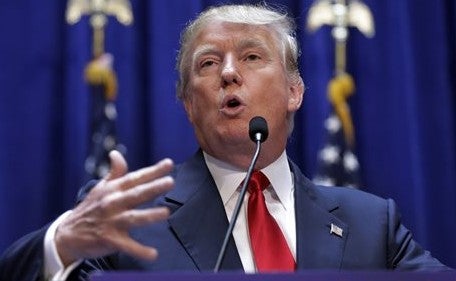 A victory of Republican presidential candidate Donald Trump in the upcoming US presidential election would have serious repercussions not just on Filipinos in America but also on Philippine-American relations.

After Trump lumped the Philippines together with other Muslim countries as a terrorist-exporting country, it would now be extremely difficult for the thousands of Filipino TNTs (tago nang tago) to pursue their American dream should the New York realtor become the next president of the United States.

As Trump has threatened, these unregistered Filipinos could be hunted down, rounded up and deported to the Philippines. Mexicans, Somalis, Pakistanis, Moroccans, Yemenis and other illegal immigrants from Muslim states would also be sent home.

There are now some 3.4 million Filipinos, or Americans of Filipino descent, in America. According to the Washington-based Migration Policy Institute, the Filipinos now comprise the fourth biggest number of immigrants to the United States, next to the Mexicans, Chinese and Indians.

Under what Trump termed as “extreme vetting” for immigrants entering the United States, the thousands of Filipinos who are immediate family to Filipino-Americans, and who have waited for years for their entry visas, would now have to wait for a post-Trump presidency before their visas could be processed. The long queues at the US Embassy may also vanish for some time.

The country’s leftists and neonationalist groups that have made US-bashing their main preoccupation could now cheer. Without their lifting a finger, the United States under Trump would render the Visiting Forces Agreement and the Enhanced Defense Cooperation Agreement irrelevant. Under Trump’s policy of shared defense expenditures with its allies, the United States may now require the Philippines to pay for every single bullet or piece of ammunition that the country needs even during joint military exercises.

Barack Obama’s pivot to Asia will now become a pivot away from Asia as Trump isolates the United States even from its most trusted allies in Europe and Asia.

But why did Trump include the Philippines as part of a great “Trojan horse” that could sneak terrorists in the guise of refugees or immigrants into the United States to engage in terroristic activities?

Almost on the same day that Trump attached the terrorist label to the Philippines, Kuwaiti authorities announced the arrest of a Filipino woman accused of pledging allegiance to the Takfiri Daesh, the Arabic term for the Islamic State (IS).

Kuwait’s interior ministry said in a statement that the Southeast Asian woman was born in 1984 and had entered the country last June as a housemaid. It did not release her name but published her photo.  It said security forces monitored one of her e-mail accounts and discovered messages in which she had contacted an IS jihadist in Libya by means of “a fake name and nickname to evade recognition.”

“She confessed she was ready to carry out any terrorist attack once circumstances and means were ripe in order to undermine security and stability in Kuwait, as well as ignite sedition,” the statement published by the state-run Kuwait News Agency read.

In November 2014, reports reaching the Armed Forces of the Philippines said that a Filipino jihadist has become a member of IS and was reported to be fighting for the group in Syria. The photo of the alleged Filipino jihadist was posted on the internet by an independent news website.

According to the military, there are at least five Muslim extremist groups in the Philippines that are prone to being influenced by IS, namely the Abu Sayyaf Group, Jemaah Islamiyah, Rajah Solaiman Movement, Bangsamoro Islamic Freedom Fighters, and Khilafa Islamiyah Mindanao.

In 2014, two foreigners, suspected of being IS sympathizers or supporters, were arrested and deported by the Philippine government to their countries of origin.

Since the rise of the so-called IS caliphate, the security sector admitted monitoring a rising number of “Filipino Muslim jihobbyists” using the internet, who could be potential supporters or recruits of IS.

Recently, the Tehran-based Al Ala International News Channel reported that the IS terror group has called on its followers to focus their energy fighting in Southeast Asia, including the Philippines, besides battling in Iraq and Syria. The channel’s latest video, titled “Toghut” (Sinners against the Teachings of Allah), shows a Malaysian IS fighter in Syria, along with two other IS combatants decapitating three captives. The Malaysian terrorist, identified as Mohd Rafi Udin from Negri Sembilan, said that those fighters who cannot make it to Syria should travel to the Philippines and fight there.

Udin called on terrorists to unite under the leadership of Abu Abdullah, an Abu Sayyaf leader who has sworn allegiance to IS in January.

Alito L. Malinao is a former diplomatic reporter and news editor of the Manila Standard. Now teaching journalism part-time at the Pamantasan ng Lungsod ng Maynila, he is the author of the book “Journalism for Filipinos.”