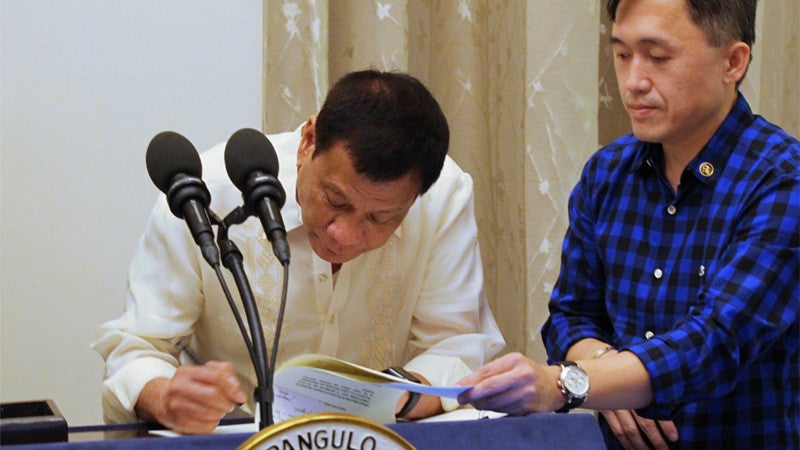 President Rodrigo Duterte signs the executive order on Freedom of Information in the executive branch of the Philippine government. (PHOTOS FROM MARO-PCOO)

POLITICIANS WHO keep their promise, and early on in their term of office, are a rarity, so it is but right to give President Duterte full credit for his signing last Sunday an executive order implementing freedom of information in the executive branch. It was one of the central, most forceful promises he made during the presidential campaign—that such was his commitment to honest, transparent governance that he was willing to preempt Congress, where some form or other of an FOI bill had languished for nearly three decades, by issuing a presidential order mandating open records in Malacañang and all other government offices under him as soon as he was in office.

It took only 25 days from the day of his inauguration for Mr. Duterte to make good on his promise—clearly a record and a milestone in how things are done in the government.

Freedom of information is enshrined in the Constitution: “The right of the people to information on matters of public concern shall be recognized. Access to official records, and to documents, and papers pertaining to official acts, transactions or decisions, as well as to government research data used as basis for policy development, shall be afforded the citizen, subject to limitations as may be provided by law.” The very first bill that sought to flesh out those provisions was filed by the late, lamented Raul Roco back in 1987, when he was still a representative of Camarines Sur.

For the next 28 years, various FOI bills were filed in successive Congresses, to no avail. With the tumultuous nine-year term of President Gloria Macapagal Arroyo, in which the executive branch made unprecedented moves to block public scrutiny of government transactions, such as banning Cabinet and other officials from testifying in Congress inquiries, the need for a bill that would institutionalize transparent governance—and would penalize public officials refusing to honor such a law—became a paramount issue. It was one of the promises that got Benigno Aquino III elected as president in 2010. He said he would pass an FOI bill during his term; he eventually backtracked on that, and completed his term with versions of FOI bills in both the Senate and the House dead in the water.

The EO on FOI that Mr. Duterte signed is not the law that Congress should have passed long ago; it has limited coverage and is restricted to agencies in the executive branch, along with state universities and colleges and government-owned and -controlled corporations. The legislative and judicial branches are exempt from its reach. The list of exceptions to information that should be made public upon request by ordinary citizens, which the Department of Justice and the Office of the Solicitor General have been directed to draw up, may further dilute the order down the road.

But this is an order that, at a minimum, appears to have teeth and is serious about being taken seriously. Section 15 of the EO says that any employee or public officer who fails to comply with its provisions may face administrative and disciplinary sanctions. On its own, then, despite its limited nature, Mr. Duterte’s initiative to apply a fresh, innovative hand to the FOI issue represents a formidable reboot—a kick in the butt, if you will, that should recharge the campaign to have a proper FOI law passed at last by a laggard Congress.

That should be next on Mr. Duterte’s agenda. He now enjoys, after all, “supermajority” support in Congress, with hordes of legislators immediately jumping ship after his election victory to join his now-dominant party. The FOI order deserves to be fully expanded and institutionalized into a law that covers all aspects of public office. With their party leader having taken the lead, these legislators have no more excuse to dawdle on a bill that has been ritually shunted aside for nearly 30 years.

Of course, the test of Mr. Duterte’s FOI pudding is still in the eating—how, for example, the Philippine National Police will respond when ordinary citizens request data and records on its ongoing bloody campaign against crime and illegal drugs. So far, the cops have provided little proof of their blanket assertions that the victims of summary killings, especially those that have died in their hands, are without question connected to the drug trade. The President’s FOI order should allow for closer, less encumbered scrutiny.