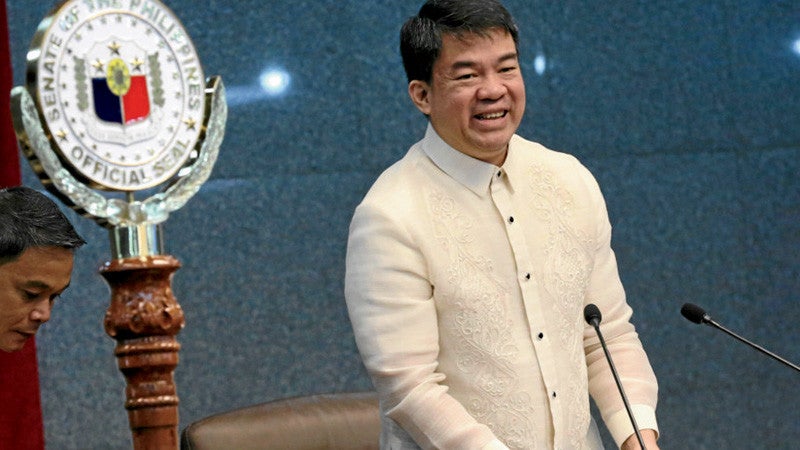 New Senate President Aquilino Koko Pimentel III is all smiles after he was elected with a 20-3 vote on Monday at the Senate. INQUIRER/ MARIANNE BERMUDEZ

AS SOON as it became clear, on election night, that Rodrigo Roa Duterte would win the presidency by a landslide, I followed the contest for the Senate presidency with keen interest. In part this was because Sen. Koko Pimentel, the president of the winning party, is a childhood friend and a high school classmate; in greater part, I was interested because I believe that the Senate in a Duterte administration would have to walk the fine line between support for a popular President and resistance against that President’s strongman impulses.

Since May 9, I have followed the contest closely, and have spoken to six senators, several congressmen, and a few political operatives. What follows is what I have managed to piece together; it is possible that I have only in fact described different parts of the proverbial elephant, and not the elephant itself. But it still may be worth a read.

Like many, I was stunned by the speed of capitulation in the House of Representatives. Rep. Pantaleon Alvarez’s capture of the speakership was a political blitzkrieg; about a week and a half after the election, he had already sealed the deal. In contrast, the contest for leadership in the Senate promised to be the most closely fought in decades.

His reelection as Senate president would have kept the Senate in Liberal Party hands—a victory, at least in name, for the principle of checks and balances. But it has since become clear that the LP bloc in the Senate, which includes five party members and two allies, was not enough to build a majority coalition behind Drilon.

Perhaps, on a good day, the bloc could count on six senators; most days, it would have to make do with five. These numbers, however, were enough for a swing vote. Drilon et al. came to terms with reality around the last week of May or the first week of June—and collectively decided to swing behind Pimentel.

The only time I spoke to Pimentel directly about his plans was a few days after the election; all he said was that, while he was friendly with many senators, he had worked very closely with Drilon and the LP on various measures. He recognized this history, he said.

At around the same time, another group of senators, with Senators Tito Sotto and Loren Legarda, also began to reach out to Pimentel. They had also done the math, and recognized that Pimentel had the best chance of putting together a working majority.

But other senators assured me that in President Duterte’s Cabinet, Finance Secretary Carlos Dominguez campaigned actively for Sen. Alan Peter Cayetano, as the President’s own choice. (I have not had the chance to talk to Dominguez, but two senators told me separately about this campaign.) On the other hand, Energy Secretary Alfonso Cusi, a PDP-Laban mainstay, campaigned for Pimentel—at least until the middle of July, when he was supposedly advised to cease his campaign. (Again, my source is a senator.)

As late as the third week of July, Cayetano’s candidacy remained active. According to one senator who was committed to him, Cayetano was supposed to present the President with a list of 10 or 11 signatures—still short of the 13 needed, but long enough for the President to work on and complete. But the same senator said he was actually reconsidering his commitment to Cayetano because the promise to gather those 10 or 11 signatures was taking too long to fulfill.

I understand that Cayetano did in fact have at least seven senators supporting his bid at the peak of his campaign (two of these senators gave me the same list of names). This group was particularly anxious about Pimentel’s commitment to Sen. Leila de Lima, to name her chair of the committee on justice. (I believe this helps explain the vicious campaign against De Lima in the last few weeks, as well as the corollary attempt to paint Sotto with the old illegal-drugs brush.)

But by Thursday or Friday last week, even the members of this group had already pledged their votes to Pimentel. They had given up on Cayetano’s promise.

In the end, 20 senators voted for Pimentel as Senate president. The total includes Sen. Ralph Recto, who contested the position, and who by tradition voted for the opposing candidate. Pimentel voted for Recto; together with the votes of Senators Antonio Trillanes and Chiz Escudero, Recto won three votes. Cayetano, unfortunately, was the only one who was not present in Monday’s vote.

In his acceptance speech, Pimentel outlined his legislative agenda, paid special tribute to his father, who was Senate president 15 years ago—and then gave special thanks, by name, to Drilon and his group, and to Sotto and Legarda. I thought that was worth noting.

Can’t go to the dentist yet? The answer is to #SaySafe

Duterte Youth attempts to rally inside UP; students, school officials block them