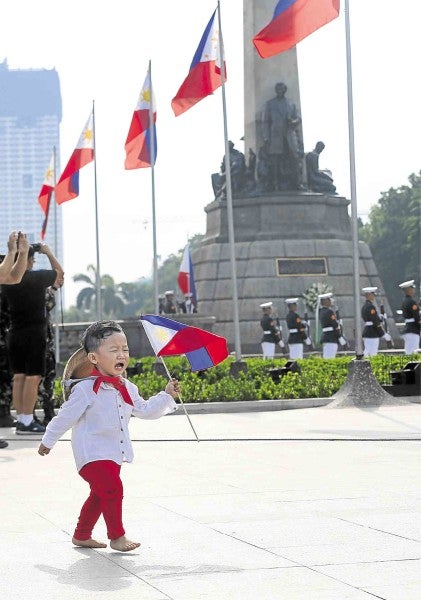 ON HIS OWN A little boy wearing a Katipunero costume learns the meaning of independence as he is separated from his companions on Saturday during practice for participation in Independence Day ceremonies at Rizal Park today. MARIANNE BERMUDEZ

When Emilio Aguinaldo raised the nation’s flag and declared independence, he wanted to inspire the people of his time to see themselves as “Filipinos,” independent and free.

More than the reality of independence—the Spanish government was still entrenched on our shores—it was a call for Filipinos to sustain the fight for their political freedom.

In this commentary on the 118th anniversary of the Declaration of Independence, I would like to pay tribute to Heneral Antonio Luna, not as the military strategist portrayed in the recent biopic, but as founder of La Independencia, the revolutionary newspaper that he set up together with his brother Joaquin.

Having been part of La Solidaridad, with Jose Rizal and Marcelo H. del Pilar, Antonio appreciated the importance of the press in fostering the spirit behind the declaration of independence. La Independencia, which was published daily from Sept. 3, 1898 to Nov. 11, 1900, was composed of four pages, with a page for advertising.

READ: Did You Know: La Independencia

It carried news items here and abroad. But, the heart of the paper was its editorial and opinion pages, which carried the works of Antonio, Apolinario Mabini and Epifanio de los Santos, among others.

Antonio understood the importance of informing the Filipino people of events pertaining to the revolution and important ordinances of the fledgling Philippine government. La Independencia gave Filipinos an alternative to Spanish-owned publications and informed them of matters that they would not otherwise find in the existing publications of those times.

While the means of disseminating news and information have dramatically changed over the last century, the important role played by media has not.

In fact, media, especially one that is independent, and not beholden to those holding political power, remains the best defense for the political and socioeconomic freedoms of the citizens they serve. As noted by former United Nations Commissioner on Human Rights Abid Hussain, “Freedom will be bereft of all effectiveness if the people have no access to information. Access to information is basic to the democratic way of life. The tendency to withhold information from the people at large is therefore to be strongly checked.”

Recent statements by President Aquino downplaying the issue of impunity in the murder cases of slain journalists and worse, the declarations of President-elect Rodrigo Duterte that the slain journalists were mostly corrupt media practitioners causes serious alarm because it signals government’s attitude toward human rights violations and media freedom.

The news media has been dubbed the Fourth Estate because its primary role is that of a watchdog of the three pillars of government. Its primary task is to watch out for the common good and to report violations of individual and collective rights. The media, as the mouthpiece of all sides of the political equation, also serves as the venue for political negotiations to happen. Media practitioners should not be penalized for reporting what has occurred or what it has uncovered.

In 2007, I spearheaded a comprehensive study on the cases of slain journalists from 2001 to 2007 and found that 90 percent of them were killed in cold blood while attempting to expose graft and corruption (Inquirer, Oct. 12, 2007, Page A1).

Other similar and latter studies have shown the same. Thus, to malign their reputations in an attempt to dismiss the seriousness of the issue even as it openly threatens the work media carries out to expose those who seek private gain from what ought to be for the public’s benefit.

At the same time, the periods wherein there was a lack of freedom of expression and freedom of information in Philippine history (most recently during the martial law in the 1970s-1980s) should serve as a reminder of the need to keep vigilant in the protection of this basic right guaranteed by our Constitution.

Good governance should include the fostering of pluralism rather than the intolerance for views which differ from our own. True democracy should mean, “we can agree to disagree,” instead of imposing one’s views on others.

(The author is an associate professor of Journalism and Media Literacy at the College of Mass Communication, University of the Philippines.)

UP Journalism to Duterte: Retract unjust remark on media killings

Being worthy of liberty