Being worthy of liberty | Inquirer Opinion

Being worthy of liberty 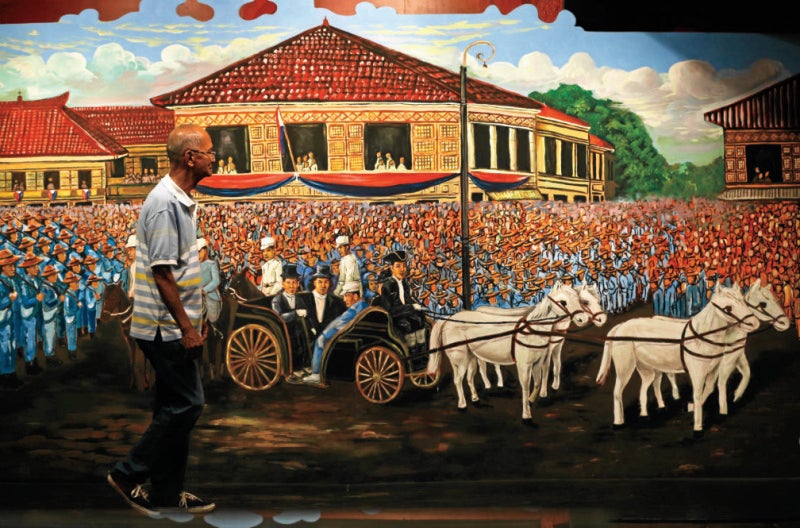 INDEPENDENCE DAY INKAWIT Volunteer tour guide Jose Venerando Vales, 73, shows a mural based on a black-and-white photograph taken in 1899 of Gen. Emilio Aguinaldo holding a fashionable cane while riding a carriage with some companions. The painting at the Aguinaldo Shrine in Kawit, Cavite, depicts Aguinaldo on his way to the inauguration of the First Republic in Malolos Congress. LYN RILLON

A year and a day ago today, on the eve of the 117th Philippine Independence Day, Lea Salonga tweeted a question about freedom: “Our country is not yet debt-free, poverty-free, crime-free or corruption-free. So what are we free from exactly and why do we celebrate it?”

READ: Should we celebrate Independence Day?

It was a reflective, rhetorical question, meant to prod people to pause and think. Salonga, one of the country’s most talented, articulate and intelligent artists, was apparently doing the same—spending the day giving thought to the question of what really constitutes freedom for a country that, while now free of colonial enslavement, is beset by modern challenges that still chain its people to hardships and interfere with their ability to chart their own collective destiny. What, indeed, is freedom in today’s context?

One never got a good answer. Moments after the tweet, social media exploded and Salonga was widely bashed for, among other things, allegedly being unfair to her country by singling it out when no other nation in the world is ever completely free of crime, corruption and the other social ills she mentioned; supposedly disrespecting the heroes who died to obtain Philippine independence from Spain in 1896, the historic occasion formally celebrated on June 12; and generally being a party pooper, raising uncomfortable questions when many of her countrymen, or those on social media at least, were in the mood to banner their patriotism by posting flag memes.

A year later, one can view this episode as a harbinger of sorts. The election frenzy that gripped the nation a few months down the road would not only replicate the uproar over the Salonga tweet but also render it on steroids—the rhetoric becoming frighteningly threatening, absolutist, and, worst of all, often fact-free. The weeks and months leading to the May 2016 elections will be remembered for the strange new strain of virulent discourse that seemed to have infected the interaction of Filipinos online, as the debate over which candidates were best fit to lead the nation degenerated into an orgy of name-calling, systematic trolling, fake news, and even outright warnings of rape and murder.

The effect of such agitated, extremist talk is to sideline any attempt at keeping issues in sober, thoughtful perspective. The mood was angry, confrontational, and in its wake the grotesqueries of the campaign—say, the cussing ad nauseam and call for liquidating “criminals” without trial by then candidate and now President-elect Rodrigo Duterte, or the public dare by his cocandidate Mar Roxas to a slapping contest—became the new normal. While the apparently organized trolling mania of the elections has died down a bit, that historic turn for the worse in terms of less open, welcoming discourse is evident in the worrisome news that a number of Facebook posts critical of the incoming administration’s moves and statements so far were arbitrarily taken down at the behest of unknown complainants.

So to Salonga’s list of national afflictions, she can add small-minded thinking—a dangerous condition that goads people to declare that they wouldn’t mind curtailments on the freedoms they currently enjoy, such as the fundamental right to due process, in the name of cleaning the streets of lowlifes (or, who knows, pesky neighbors). Freedoms, mind, that were won for them not only by 19th-century Filipino revolutionaries but, closer to this period but scrubbed from memory, the martyrs of martial law, whose heroism against the brutality of the Marcos dictatorship led to the strengthening of the Bill of Rights and greater constitutional safeguards against the resurgence of tyrannical rule.

“Our liberty will not be secured at the sword’s point,” Rizal wrote. “We must secure it by making ourselves worthy of it.” People who refuse to engage with the hard questions and prefer instead to stay on the cheery surface of things; who suppress dissent, forget history and dismiss appeals to the rule of law as weakness; who see no irony in publicly pining for a return to an age of censorship and one-man rule on a media platform that allows them free expression but would, in fact, be the first to be outlawed in that setup; who are so cavalier, in other words, about their freedoms as to want to give these up just like that… Such people are unworthy of that great gift of liberty.

Sacrifice and vigilance are the underpinnings of any day celebrating independence. Are we keeping our part of the bargain?

Read Next
Forgiven? Forgiven!
EDITORS' PICK
Do all the things you do, faster
Nothing’s certain so here’s how everyday Filipinos can make the most out of their Plan B
PNP vows to bring justice for slain Percy Lapid; says probe underway
Percy Lapid’s kin: ‘We demand that his cowardly assassins be brought to justice’
House energy committee chair Arroyo bats for cheap electricity
‘Seniority’ requirement despite vacant posts in DOH bothers senators
MOST READ
Student stabs teacher dead in Samar town
Trixie Angeles quits as press secretary due to health reasons
Not rehired?: Trixie Angeles not on list of reappointed Cabinet execs
Heart Evangelista to stay abroad ‘indefinitely’: ‘Hindi muna ako babalik’
Don't miss out on the latest news and information.