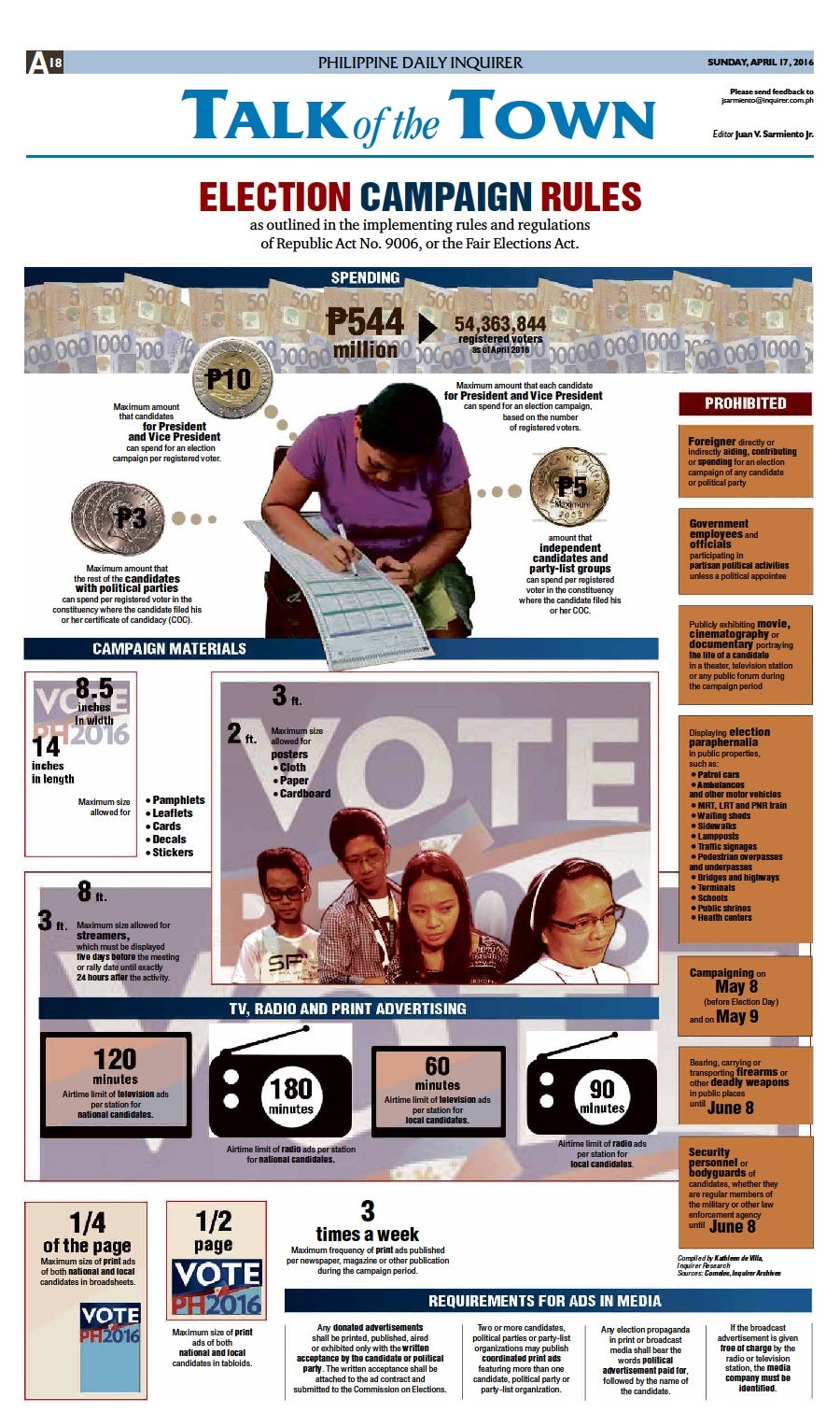 —as outlined in the implementing rules and regulations  of Republic Act No. 9006, or the Fair Elections Act.

Maximum amount that candidates for President and Vice President can spend for an election campaign per registered voter.

P5
Maximum amount that independent candidates and party-list groups can spend per registered voter in the constituency where the candidate filed his or her COC.

P3
Maximum amount that  the rest of the candidates  with political parties  can spend per registered voter in the constituency where the candidate filed his or her certificate of candidacy (COC).

3 ft. x 8 ft.
Maximum size allowed for streamers, which must be displayed  five days before the meeting  or rally date until exactly 24 hours after the activity.

90 minutes
Airtime limit of radio ads per station for  local candidates.
1/4  of the page
Maximum size of print ads of both national and local candidates in broadsheets.

1/2 page
Maximum size of print ads of both  national and local candidates in tabloids.
3 times a week
Maximum frequency of print ads published per newspaper, magazine or other publication during the campaign period.

REQUIREMENTS FOR ADS IN MEDIA

—Any election propaganda in print or broadcast media shall bear the words political advertisement paid for, followed by the name of the candidate.

—If the broadcast advertisement is given free of charge by the radio or television station, the media company must be identified.

—Government employees and officials participating in partisan political activities unless a political appointee
—Publicly exhibiting movie, cinematography or documentary portraying the life of a candidate in a theater, television station or any public forum during the campaign period

—Campaigning on May 8  (before Election Day) and on May 9

—Foreigner directly or  indirectly aiding, contributing  or spending for an election campaign of any candidate  or political party

—Bearing, carrying or transporting firearms or other deadly weapons in public places until  June 8

—Security  personnel or  bodyguards of candidates, whether they  are regular members of the military or other law enforcement agency  until June 8