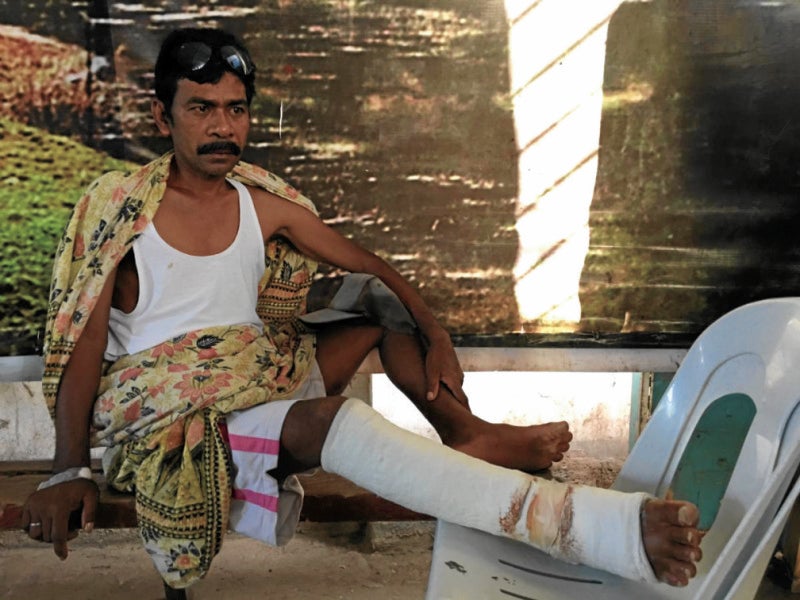 In this April 9 photo, farmer Arnel Takyawan, who sustained a gunshot wound in the leg during the dispersal operation of police, remained languishing at the Kidapawan City jail . PHOTO COURTESY of Carlos Conde of Human Rights Watch

THE TRAVESTY goes on in Kidapawan City with the continuing detention of 79 farmers—some of them pregnant women, minors, and elderly—who have been charged by policemen with “direct assault” following the violent dispersal last April 1 of the rally-barricade they and other farmers had mounted at the Cotabato-Davao Highway to press the government for food.

How ludicrous does that sound? Here are elderly farmers stooped by years of backbreaking toil, impoverished all their lives and now famished by the ravages of El Niño, hauled to jail and haled to court for supposedly assaulting armed cops. Detainee Valentina Berlin, 78, a frail widow tending a small patch of land in Arakan, North Cotabato, had gone to the rally in the hope of receiving rice assistance from the local government. One look at her and one would conclude that the cops who brought the charges and the prosecutors who deemed such charges valid for a hearing are inexplicably cruel, or plain mad.

Berlin, three minors, two other elderly persons, three pregnant women, and scores of other hapless farmers are in detention because they have to answer the ridiculous police action against them and because they are required by the court to post bail before they can be released. The original bail was set at P12,000 each—an oppressive sum to people of hand-to-mouth lives who took to the streets precisely because what little they had was taken from them by famine and government inaction. Moved by the farmers’ plight, actress-singer Aiza Seguerra and partner Liza Diño spearheaded a fund drive among kindred spirits and raised P546,000 to cover the bail amount. But before that could be settled, the judge reduced the amount to P6,000 each.

End of story? Not quite. The oppressive system found yet another reason not to let the farmers go: Many of them could not present valid identification, and so even with bail money available to spring them, they remained in custody. These are subsistence workers who had marched for days far from their homes under the searing sun in desperate search of food. Bringing proper IDs—assuming the responsible government agencies had in fact managed to reach them beforehand to help them fulfill the basic tasks of civic identification—would be the least of their concerns.

But, incredibly, after the traumatic experience they went through at the picket line when their demand for rice was ultimately met with truncheons and bullets, they are now being required to produce identification papers pronto as a precondition for their freedom. Many of the detainees like Berlin claim they weren’t even at the front lines of the demonstration; the minors, pregnant women and elderly moved to the sidelines right before the melee, but the police rounded them up anyway. They were apparently told they would be taken to a safe area, only to be clapped in jail and slapped with charges.

A conscientious administration would, by now, have seen the lunacy of the situation and given the cops not only a dressing-down for heavy-handed behavior but also an order to release the farmers forthwith. But then, a conscientious administration would also have seen that farmers suffering from a crippling drought that began in October 2015 should first be fed, their needs addressed with urgency and compassion, before any sort of bureaucratic requirement that would distress them even further is imposed on them.

Obviously, this is not that administration. President Aquino took days to publicly comment on the Kidapawan violence—and with an off-the-cuff statement admitting he didn’t know about the days-long demonstration because he himself had the flu. By not lifting a finger so far to correct the situation in Kidapawan, he has also seen fit to compound the original injustice by letting the police continue to inflict misery on powerless citizens.

“Deliberate cruelty is not forgivable,” said Blanche DuBois—perhaps an incongruous figure to evoke at this point. But if the treatment of the Kidapawan farmers is any gauge, this is an administration that appears to be as mad and delusional, if nowhere near as sympathetic—no longer able to distinguish between right and wrong, between what’s just and what’s merely cruel.