(First of a series)

AT THE FORUM of the Inquirer Town Hall Series on the Visayas held on March 17 on the campus of the University of the Philippines Visayas, the question was raised: Is Iloilo’s booming economy sustainable or is it just dependent on its political leaders, one of whom is Senate President Franklin Drilon?

The question on the theme “Iloilo’s Boom: Model or Mirage?” opened a kaleidoscopic panorama of issues, associated with Iloilo’s history and reputation as the “Queen City of the South,” for which its eminent political leaders of national stature are only marginally responsible.

To begin with, Iloilo was created by a Spanish royal decree.

A Wikipedia entry on Iloilo City said: “Moved by the Ilonggo’s loyalty (to Spain), the Queen Regent Maria Cristina honored the city of Iloilo (in the name of her son King Alfonso III) with the title Muy Noble. The Royal Decree granting the perpetual title Muy Noble was signed on March 1898 by the Queen Regent. Over time, this title earned for Iloilo City renown as ‘The Queen’s Favored City in the South,’ or the ‘Queen’s City in the South,’ a title Iloilo City still claims, but is now more attributed to Cebu City for reasons of economic progress, after Cebu eclipsed the economy of Iloilo in the aftermath of its economic decline.”

Whether or not Iloilo can keep the crown as the “Queen City of the South” on its head depends on its economic performance than on its regal provenance.

Located on the southern shores of Panay Island, Iloilo City faces the Iloilo Strait and Guimaras Island across it, making a natural harbor and safe anchorage for oceangoing ships.

According to Wikipedia, the city lies on flat alluvial plain, reclaimed mostly from the swampy areas due to urbanization. It has a deep river harbor used mainly for interisland vessels. Iloilo City is a hub for trade, commerce, finance, technology, medical tourism, education and industry in the Western Visayas region.

The assets of Iloilo as the economic, political and cultural center were recognized as early as the 1990s, by a report of the Philippine Commission to the US president.

The report said: “The towns are almost all large, clean and well built. In no other province or district are there so many churches, they are all of stone. In all towns, especially those of the coast, there are many Europeans and Chinese half castes. The capital of the province is of the same name, Iloilo. Its houses are excellent and of good construction. It is, next to Manila, the most important commercial town as well as it exports as it imports. It has, like Manila, an ayuntamiento established by a decree and banking houses.”

In 1902, an American teacher, Mary H. Fee, described Iloilo as a “miniature edition of Manila.”

When the Spaniards arrived in Cebu in 1565, they conquered a loose tribal community built around the Islamic Tagalog Kingdom of Manila, with the help of Ilonggo warriors, and subsequently officially proclaimed Manila as capital on June 24, 1571.

Within a decade in the late 1800s, two towns of Iloilo were merged as a city—Jaro and Iloilo City. By Aug. 13, 1898, Iloilo City became the capital of Imperial Spain through the Spanish governor.

Iloilo City tourism officer Benito Jimena said the city still held the “Queen City of the South” title while no formal recognition had ever been given to other places in the country, particularly to Cebu City, adding that the prestigious title was given to Iloilo City because of the then increasing development in industry and commerce by the Queen Regent of Spain, through a royal decree on Oct. 5, 1889, and technically remains as of today.

Jimena further said Cebu, later known as the Queen City of the South, was “just a perception” given by the media, being the most progressive city in the Visayas, but that there was no official declaration such as of Iloilo City.

The sugar boom in the late Spanish era opened the entry of Iloilo City to international trade.

According to Wikipedia, after its establishment under Spanish rule, Iloilo received migrants from the West, who worked in the city’s industries operated by the Lopez, Jalandoni, Lim and Sy families. 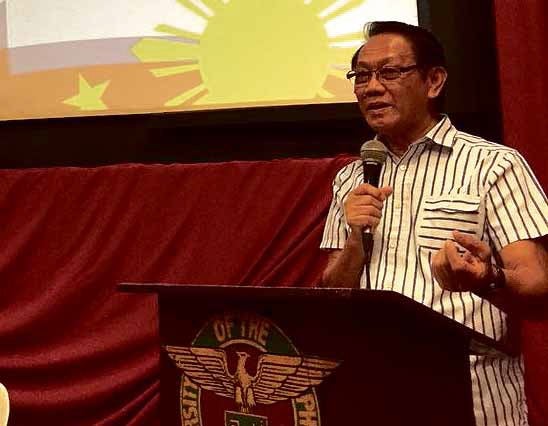 TOWN HALL MEETING ArchitectManuel Tingzon Jr. shares the efforts of the private sector to conserve and rehabilitate cultural heritage sites and structures in Iloilo City during the INQUIRER Town Hall meeting at the UP Visayas Cinematheque. JOHN NERY/INQUIRER.NET

In the late 18th century, the development of a large-scale weaving industry started the movement of Iloilo’s surge in trade and economy in the Visayas.

From textile to sugar

Sometimes referred to as the “textile capital of the Philippines,” Iloilo produced looms that went to Manila and other foreign places. “Sinamay,” “piña” and “jusi” were examples of the products.

The social significance of this surge, according to this narrative, was “because of the rise of the textile industry, there was also a rise of the upper middle class.” However, with the introduction of cheap textile from the United Kingdom (Manchester) and the emergence of the sugar economy, the industry waned in the mid-19th century.

The global implication was that the waning textile industry was replaced by the opening of Iloilo’s port to the world market in 1855.

“Because of this, Iloilo’s industry and agriculture were put on direct access to foreign markets.

But what triggered the economic boom of Iloilo in the 19th century was the development of the sugar industry in its neighboring island of Negros. Sugar during the l9th century was of high demand.

Nicholas Loney, the British vice consul in Iloilo, said this led to the construction of warehouses in the port, and the introduction of new technologies in sugar farming,” according to the report.

“The rich families of Iloilo developed large areas of Negros island, which were later called haciendas. Because of sugar’s high demand in the world market and the corresponding increase in commercial activity, infrastructure, banks, foreign consulates, educational institutions and commercial firms sprouted in Iloilo.” To be continued