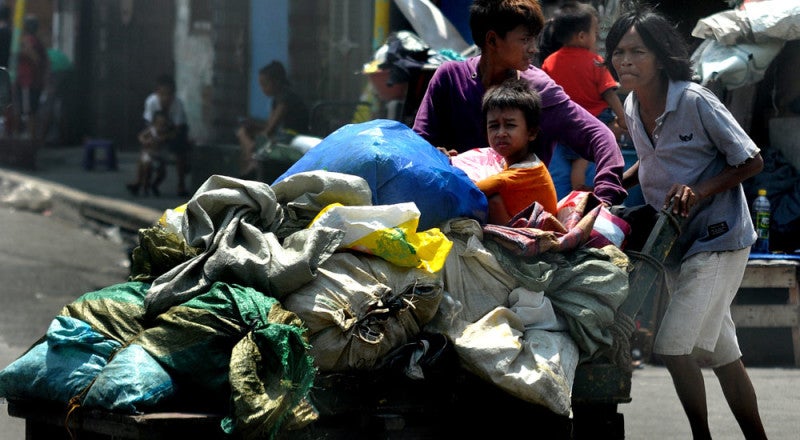 POVERTY REMAINS the one area that overshadows the economic achievements of the Aquino administration. At the end of a six-year term highlighted by enviable economic growths that began in 2010, more than 26 million Filipinos remain poor. And nearly half or more than 12 million of them live in extreme poverty and without the means to feed themselves.

Contrast this with the few Filipino families who land every year in the Forbes magazine’s list of billionaires (in US dollars) and one can do the math: The benefits of economic growth are not trickling down to where these are most needed, and the cause of which is attributed to various factors, among these, a flawed economic growth model that only makes the rich grow richer; an economy where inefficient economic sectors are protected from competition, which could bring down the cost of goods and services; or a government where corruption is so prevalent even at the barangay level, such that it has adversely affected public service.

The latest survey by the Philippine Statistics Authority showed that in the first semester of last year, 26.3 percent of Filipinos were living below the poverty line (a measure of the minimum income required to meet the basic necessities). This was equivalent to 26.48 million Filipinos, based on the total population of 100.7 million in 2015. In 2012, the national poverty incidence stood at 27.9 percent of the population. In 2009, it was 28.6 percent, practically unchanged from the 2006 level of 28.8 percent.

The poorest regions in particular needed more immediate government attention. For example, the Autonomous Region in Muslim Mindanao (ARMM), which had the highest proportion of the poor at 59 percent of the population in 2015, had almost a third of its residents, or 30.1 percent, living in extreme poverty. The explanation was that the region was conflict-ridden and the ARMM–or Mindanao, for that matter–has always been neglected economically in the past. This was reflected in the worsening figure for the ARMM, which in 2006 had a poverty incidence of 49.8 percent (21.1 percent among them extremely poor), 49.7 percent in 2009 and 52.9 percent in 2012.

In contrast, Metro Manila, the seat of government and the country’s business hub, had the lowest proportion of the poor, with just 6.5 percent of its population below the poverty line, although this has been rising from 4.4 percent in 2006 to 5.4 percent in 2009.

It is true that the latest poverty incidence figure reflected slight improvements from the same period in 2012, two years after President Aquino assumed power, as well as from 2009 and 2006 under the Arroyo presidency. However, we beg to disagree with how an official of the National Economic and Development Authority describes the figure as “actually good,” and a sign that economic growth has trickled down to lower-income families. The fact remains that the Philippines has failed to meet its commitment to the United Nations under the millennium development goals on poverty, which was to halve by 2015 the country’s poverty incidence to 17 percent in 2015 from 34 percent in the 1990s.

The real poverty figure could in fact be higher if we are to consider the official national food threshold of P7,638 a month–the requirement for a family of five to be able to have three regular meals every day. This threshold is equivalent to P254.60 a day for a family of five, or P50.92 for each member to be able to eat three meals a day. That is P16.97 for each meal.

No wonder candidates seeking the presidency have again highlighted the poverty situation in the country, each promising to uplift the economic conditions of those who are in need most. Sadly, a promise always repeated every election season. What could be different this time? Or put another way, what different, specific programs or measures have those vying for the presidency committed to undertake to really address poverty? So far, we have not heard any from all of them, except for the promise to continue or expand the conditional cash transfer scheme dubbed Pantawid Pamilyang Pilipino Program or 4Ps. Which, economists agree, cannot reduce poverty in the long run as this is meant to just tide the poorest of the poor over extreme poverty.

‘On the Wings of Love forever’: JaDine breakup stirs up emotions of fellow celebs and celeb fans

Ayala Land bares facts on Technohub deal: P4B in lease to UP