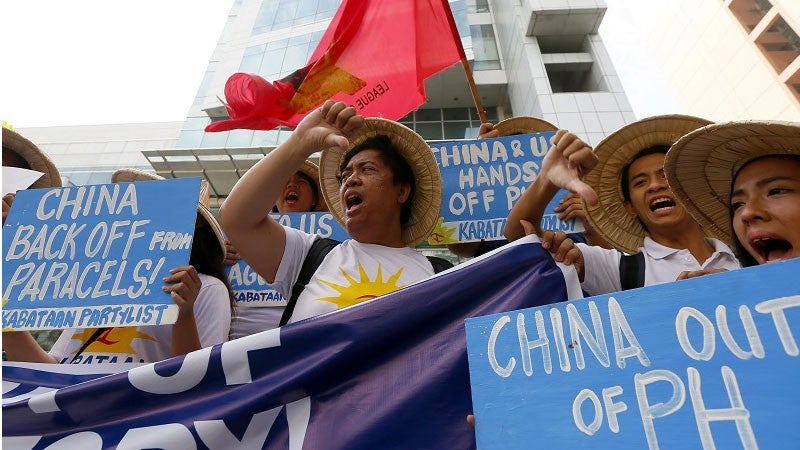 Protesters flash thumbs-down signs as they shout slogans during a rally near the Chinese Consulate in the financial district of Makati city, Philippines, to denounce the alleged deployment of surface-to-air-missiles by China on the disputed islands off South China Sea, Friday, Feb. 19, 2016. The protesters are calling on China to halt its island-building on some of the disputed islands and its alleged increasing militarization. (AP Photo/Bullit Marquez)

Days after news came out that China has deployed not only fighter jets but also antiaircraft missiles and radar to the disputed Woody Island in the South China Sea, and even after the United States has also publicly expressed alarm at China’s increasing militarization, which is “changing the operational landscape” of the area, according to Adm. Harry Harris Jr., head of the US Navy’s Pacific Command, none of the five candidates seeking the presidency of the Philippines has presented a definitive policy statement on the issue.

For Davao Mayor Rodrigo Duterte and Liberal Party standard-bearer Mar Roxas, the days before and after the ominous new indications of China’s military buildup very near Philippine shores were spent as usual on their tiresome shtick of taunting each other in front of the cameras, egged on by their supporters—Roxas twitting Duterte about Davao’s supposed drug-free reputation by saying that even he knew where to buy the contraband in the city, and the mayor firing back by calling Roxas a “failed politician.” The back-and-forth made for another round of clickbaits on social media, but in the end revealed nothing more than just how shallow, if scorched-earth, the campaign strategies of both camps are.

Can there be any doubt by now about China’s intentions on the entire South China Sea? The emerging superpower has employed a combination of muscle, intimidation, obfuscation and plain lies to control an area claimed by other countries, the Philippines included, in the idea that its practical occupation of disputed isles and reefs would eventually amount to their de facto ownership, in violation of accepted international law.

Woody Island, for example, is claimed by Taiwan and Vietnam; when reports emerged of China’s deployment of fighter jets there, China dismissed the furor as merely “the hyping by certain western media.” Now it has changed its tune, with its foreign ministry spokesperson Wu Qian quoted as saying that “China’s construction of military facilities on the islands and reefs of the South China Sea is really needed,” and that all such military facilities are “legal and appropriate.” The premise, of course, remains the same: that China has indisputable sovereignty over as much as 85.7 percent of the vital waterway according to its so-called “nine-dash line,” and therefore is free to do with it as it wishes. That unilateral claim is its nonnegotiable starting point for any discussion—and the battering ram by which it has continued to dash any attempt at a dialogue or mediation between coequal nations, such as the Philippines’ move to bring the issue to a formal hearing by a United Nations arbitral tribunal.

China’s arbitrary and increasingly aggressive moves so close to Philippine borders, and over islands and waters to which the Philippines has had far older claims, represent “the gravest external threat since World War II,” warned Supreme Court Associate Justice Antonio Carpio in a recent forum. Hence, he is challenging the five presidential candidates to openly state their position on the China problem, to tell the electorate whether they would continue with the UN arbitration that’s currently awaiting resolution, or enter into negotiations with China if they are elected president.

Of the aspirants, Vice President Jejomar Binay is on record as advocating a “joint venture” arrangement; as he put it, “China has money, we need capital.” Duterte takes a similar tack, saying he will talk to China and “assert our rights”—but will also be open to joint exploration. Sen. Grace Poe has backed the Philippine case at the UN tribunal, while saying she will “pursue” other possible avenues for bilateral relations. Roxas’ clearest statement on the matter is this declaration: “Ang para sa Pilipinas ay dapat manatili sa kamay ng Pilipino. Dedepensahan natin ang atin (What is for the Philippines should remain in our hands; we will defend what is ours).”

That’s it so far—generic statements devoid of specifics that the electorate can hold to scrutiny. Carpio warns that more serious, substantial strategy is required of anyone wishing to be the next president, “because the condition of China for joint development is [that] we concede sovereignty to them and they will give us 50 percent of resources within our economic zone.” Other claimant countries have not acceded to this high-handed condition. What do the five presidentiables say?