CARS to rev engine of manufacturing 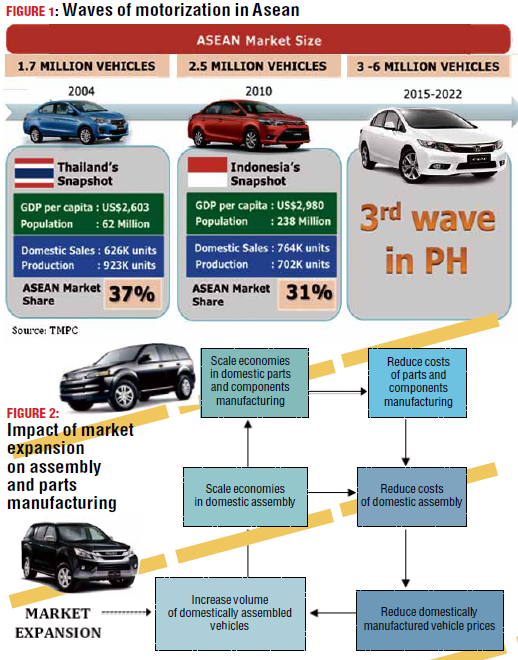 The manufacturing industry has grown by 8.1 percent over the last five years and has been a leading growth driver of the economy. To help sustain this strong growth and create more and better jobs, the government has been pursuing a new industrial policy. This aims to upgrade and create globally competitive manufacturing industries with the government acting as facilitator in addressing the most binding constraints to growth preventing the entry of new firms or existing firms from moving up the value chain.

At the heart of the manufacturing industry road map is the development of the automotive industry through the Comprehensive Automotive Resurgence Strategy (CARS) program. Auto manufacturing is a complex process with over 30,000 parts linked through various tiers covering raw materials and intermediate parts—from manufacturing (electronics, chemicals, steel, other metals, glass, rubber, plastic and textile) to services (marketing, banking and after-market sales).

As such, auto has one of the highest multiplier or spillover effects within the economy. Dr. Cid Tarosa’s (2011) calculations showed an output multiplier of 3.56 and an employment multiplier of 169 for every P100-million investment in the industry.

Automobile manufacturing is a high-tech and highly globalized industry with operations characterized by regional or global production networks. In these networks, auto companies have fragmented their processes, locating these in various countries that are competitive in producing these products. Competition has become tougher because countries must compete not only against other countries but also against other subsidiaries within the network.

To take advantage of the opportunities arising from regional integration (through the Asean Economic Community), the country needs to deepen its participation in these production networks of global automakers. The market potentials in both the domestic and regional markets are huge. In the Philippines, 500,000 units are expected by 2022 and in Asean, demand forecasts range from 3 million to
6 million units by 2020, with the third wave of motorization expected to take place in the Philippines in the same way that it occurred in Thailand in 2004 and Indonesia in 2010. (See Figure 1.)

We have an emerging auto cluster in Laguna and Cavite consisting of four automakers (Toyota, Mitsubishi, Honda and Isuzu) and 256 parts manufacturers of around 330 different components. With $4.3 billion in exports contributing 7 percent to our total exports in 2014, the industry is a net exporter of parts like ignition sets, radio receivers, brake system, transmissions, air filters, pneumatic tires, lead acid accumulators and other motor vehicle parts.

In terms of domestic production, volume was limited to 86,218 units due to the absence of scale economies, lack of a strong supplier base and high production costs. The industry is facing competitiveness issues that must be immediately addressed to transform and become a regional manufacturing hub. Assemblers are operating below the optimum production size and the estimated cost gap between the Philippines and Thailand ranges from P45,000 to P90,000 per vehicle.

An adjustment program is necessary to address the cost competitiveness gap, strengthen the viability of the industry and facilitate its integration into the regional and global production networks. Figure 2 illustrates the effects of domestic market expansion on both assemblers, and parts and components manufacturers.

Higher volumes will allow both assemblers and parts and components manufacturers to attain scale economies leading to reduced costs. To make this happen, government support is critical to aid firms as they restructure their operations. Government can assist the industry by providing incentives to encourage upgrading and market expansion as well as enable the industry to create a niche in the global market and actively participate in global or regional production networks.

CARS was a product of research studies conducted by the Philippine Institute for Development Studies and the University of Asia and the Pacific since the 1990s. These served as inputs for the crafting of the Automotive Industry Road Map which was submitted by the industry association to the Department of Trade and Industry-Board of Investments (DTI-BOI) in 2013.

The main goal is to strengthen the manufacturing base by deepening our integration in global value chains to enable us to benefit fully from Asean Economic Community trade and investment. To achieve this, government support is critical in formulating a program to expand the domestic market. In Stage 2, domestic market expansion is expected to take place along with new investments and enhancement of local capabilities in auto parts manufacturing. (See Figure 3.)

The process of formulating CARS took about three years from 2013 to 2015, involving many dialogues and consultations not only among the industry stakeholders but also among government agencies, academe, labor and civil society.

CARS aims to jumpstart auto manufacturing, stimulate investments in parts manufacturing, generate quality jobs, create a competitive industry and become a regional hub in the very near future. The program focuses on developing parts manufacturing, particularly large body shell and plastic assemblies, common parts, strategic parts that are not yet manufactured in the country and shared facilities. Through the temporary support of P45,000 per unit, the program attempts to close the competitiveness gap and kick-start automobile development in the country.

CARS represents a modern industrial policy. It is far different from the Motor Vehicle Development (MVD) programs carried out in the past. The program is centered on performance-based and time-bound incentives, and entails noncash mode of payment.

The fiscal support will be provided only after the fulfillment of conditions pertaining to investments in large body shell and plastic assemblies, strategic parts and production volume requirements. The program will be implemented over a period of six years.

In contrast, our old programs relied heavily on tariff and nontariff protection and regulations on the number of players, models and local content. In the current setting, these schemes no longer work especially given the global operations of auto companies in a highly open market environment. While tariff and nontariff barriers often lead to higher domestic consumer prices, fiscal support tends to do the opposite as it brings down domestic consumer prices.

CARS will support three models covering the manufacture of the following:

To be eligible to enroll in the program, a carmaker must be internationally recognized, and has a proven track record and multinational operations, including R&D, manufacturing, marketing and after-sales services in Asia, Europe and North America. A carmaker must be endorsed by the participating carmaker to manufacture parts of its enrolled model, must be an original equipment manufacturing auto parts maker and a member in good standing of the Philippine parts makers association.

In evaluating applications, the following criteria will be used:

Track record and model competitiveness, including global and domestic sales

Planned volume should be at least 200,000 units to be produced over a six-year period (model life of vehicle)

The program will have a total budget of P27 billion (or P9 billion per model) divided into two components: fixed (40 percent) and variable (remaining 60 percent). The fixed incentive support will cover capital expenditure for tooling, equipment and training costs for the initial start-up operation. It will be granted after investments in parts and component manufacturing have been completed and the first unit of vehicle using these parts and components has been rolled out.

To be eligible for the production variable incentive, body-shell assembly must be at least 50 percent of the assembly by weight and production must exceed 100,000 units.

The mode of payment will be done through a tax payment certificate that can be used to settle tax liabilities, such as income, VAT, and excise and customs duties.

To operationalize the scheme, a joint administrative order was signed among the Department of Finance (DOF), Department of Budget and Management, Bureau of Internal Revenue, Bureau of Customs, Bureau of Treasury and the DTI-BOI. This covered the payment settlement process along with the responsibilities of each agency and the ground rules.

An interagency committee is created to monitor the program’s administration and implementation. The committee is chaired by the DTI-BOI and consists of representatives of the DOF, National Economic and Development Authority, Department of Science and Technology, Department of Transportation and Communications, Technical Education and Skills Development Authority, Industry Development Council and the National Competitiveness Council. It is supported by a Project Management Office, which also serves as the program secretariat.

The committee will evaluate applications, and monitor and regularly assess the progress and effectiveness of the program. It will also coordinate with other agencies whose policies and programs affect the development of the auto industry and carry out research to formulate suitable policies for the industry. Numerous issues affecting the competitiveness of the industry and its effective implementation would have to be dealt with. These include infrastructures (roads, ports and power), trade facilitation (standards and customs procedures) and logistics.

The committee is envisioned to play an important role in promoting industry development and in coordinating solutions to these issues with both government and the private sector, and with local and international agencies.

It is only through CARS that we can develop and catch up with our neighbors who have been actively implementing their own industrial policies, and granting fiscal and nonfiscal support to their domestic auto industries.

To take advantage of market opportunities, we need to strengthen the domestic auto market base. This is crucial to build the necessary scale that would bring down costs and allow us to become a future auto manufacturing regional hub.

With its strong forward and backward linkages with other sectors, the auto industry provides the foundation for broad-based industrial growth. The implementation of CARS signals government’s vigorous support for and focus on industries with the automobile as the platform for manufacturing takeoff.

(Rafaelita Aldaba is an assistant secretary for the Industry Development Group of the Department of Trade and Industry. She is a former vice president and senior research fellow at the Philippine Institute for Development Studies.)