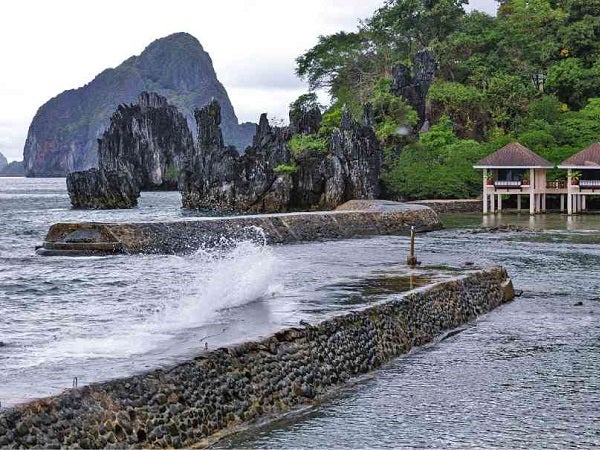 RUGGED BEAUTY The sound of crashing sea waves punctuates the peace and quiet at Lagen Island, one of four eco-tourism destinations in El Nido, Palawan.

As though we needed convincing, Conde Nast Traveler has declared our Palawan the best island in the world, and also included our other beauties, Boracay and Cebu, in the “best” list. Filipinos are quite accustomed to having our islands gushed over, natural beauty being one of the country’s plus factors—and, sadly, one of the things easily taken for granted.

Palawan’s latest distinction is its second straight from the esteemed travel magazine’s Reader’s Choice Awards, topping the Best Islands in the World Awards with an overall rating of 85.937. “This small island—one of the Philippines’ 7,107—shot to the top of our list again this year with a recent claim to fame: It’s now home to one of the new seven natural wonders of the world, Puerto Princesa Subterranean River,” Conde Nast Traveler wrote. This honor is particularly impressive as Palawan beat out perennial travel destinations Bora Bora (second), the Great Barrier Reef (sixth) and Bali (eighth).

Boracay, with its “gentle coastlines” and “transporting sunsets,” is 15th, and Cebu, “famous for its beaches,” is 19th in the awards list.

The Conde Nast Traveler poll, with 128,000 respondents worldwide, reflects the global love for pristine areas surrounded by deep water and lush marine life. The irony is that blight threatens our best destinations: a planned coal-powered plant on the world’s best island; sewage and overdevelopment issues on world-famous Boracay; and a danger of a sinking water table on Cebu.

In July, party-list lawmakers pressed for an inquiry into the planned construction of a 15-megawatt coal-fired plant in the town of Narra in Palawan. In particular, the probe is poised to look into the issuance of an operating permit by the Palawan Council for Sustainable Development despite loud protests from the local folk who had earlier rejected the plant’s construction in two other areas on the island. The permit was issued “without considering the issues of social acceptability and environmental, health and safety risks to Palawan’s communities and ecosystem,” said Bayan Muna Rep. Carlos Zarate, who correctly added: “Coal is considered one of the dirtiest sources of fossil fuel energy and is identified as a major source of global carbon emissions.” The government of Puerto Princesa, capital city and home of that new world wonder, the underground river, has joined the protest against the plant’s construction.

Over in Boracay, its white-sand beaches are suffering from overdevelopment. “It’s so dense. It is now, you know, too commercial,” then Tourism Secretary Alberto Lim lamented as early as 2010. “It’s become Phuket,” he said, referring to the popular and now crowded beach destination in Thailand. Indeed, Boracay has outstripped its ability to support a population swelled by unfettered tourism growth. Slimy green algae appear along the coastlines, and sewage problems reflect the surfeit of commerce.

Years ago, the warning was raised by then Inquirer columnist Juan L. Mercado that Cebu City was “sinking due to the overextraction of groundwater.” The Department of Public Services has called for a stop to drilling for artesian wells, with more than 5,000 wells—simply an unsustainable number—having been dug up.

Surely Conde Nast Traveler readers voted for Palawan, Boracay and Cebu because of their natural beauty and not because of the promise of even more commercial development. The local folk had lived within sustainable parameters for decades. Only with the onset of tourism and development, resulting in the crying need for conservation and protection measures, have the relative vulnerabilities of the islands been exposed.

This is the tricky arithmetic of nature tourism. Which takes priority: the protection of the attraction or the provision of modern amenities for those who come in droves to experience it? Should the future be mortgaged for the present? How to effectively preserve these treasured islands for generations to come?

And as the tourism and other sectors exult in this latest award from Conde Nast Traveler, let’s spare a thought for the provinces damaged by Typhoon “Lando” and pull together to help them get back on their feet.