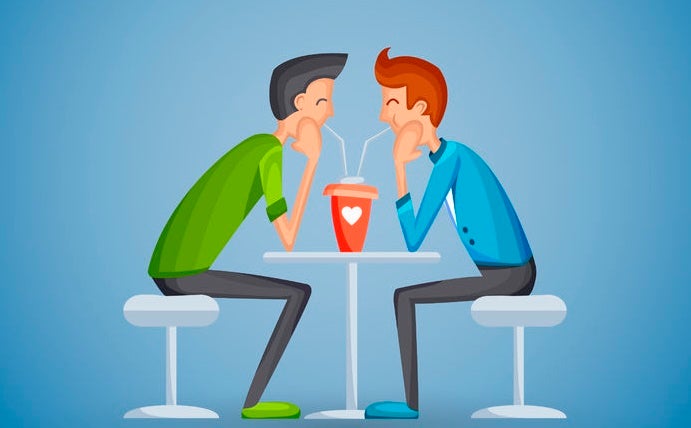 “It’s about loving each other despite the charms of wanting to be single again and patching things up before the day ends.”

The night was calm and the wind was cold, a typical Saturday dusk. I had the chance of being accompanied by my three friends toward the busy part of the city—Morayta. It was not for gimik, but for something else. Specifically, for the matters of the heart.

Almost three months ago, I had the pleasure of knowing a gorgeous member an online community. He introduced himself as a guy with principle, respect, and so much love in his heart. So much love that he could not let go of a previous partner.

Oh yes, I was the rebound guy. I was the guy who comforted the lonely and the hurt after they were rejected by their loved ones. Messianic complex, anyone?

Though warned by many of his vulnerability and promiscuity, I allowed my heart to dictate on my mind. After long, sweet promises of forever, and an unending confession of I love yous, I gave in. I surrendered and admitted that I was in love.

He said he’s not into commitments yet.

I can endure the pain of hell; I can accept the taste of death. But losing him? I wouldn’t stand it. So I accepted a new setup for me: waiting.

Studying for the CPA board exams, I had to remind myself to focus, that my title was my purpose in this life. But my love for him was so much that it consumed me. Despite the fact that the pre-board examinations were fast approaching, I surprised him on social gatherings, went to his pad every now and then, and called him every time I had the chance to do so.

But I am a man of commitment. Since I have always believed that in these times when male-to-male love is prevalent, knowing and being committed to each other is a necessity. Since this guy of mine is a man of love and respect, he agreed to put us on a cliché status—“exclusively dating” as what many call it.

The next six weeks were full of bliss. The laughs, hugs, and stories were memorable. We could talk about anything under the sun. We were the intellectual types, the perfect pair. Maybe not that perfect, but we were a good one. That was enough for me.

I texted him poems every week. I professed to everyone my love for him, and I kept on telling myself that he loved me, even though some events proved otherwise.

I kept on praying to God to guide us and make him love me more. But God won’t give us what is not good for us. He won’t grant the desires of our hearts if it will be bad for us.

On the second week of October, I earned my title, but I started to lose him.

Arguments and the usual tampo had become an everyday scenario. Jealousy, anger, and pride devoured us. I offered him a sit-down, but he refused. He stopped replying to my text and online messages. He began shunning me out of his life.

Little did I know that our dates were cancelled not because of family trips or overtime work. Perhaps he was getting tired and wanted his single life back. Maybe he wanted to flirt around without thinking about how I might feel about it. Maybe he didn’t want to feel guilty that he promised sweet nothings to me and spent a night of sensual nothings with someone else.

He didn’t consider my feelings, for instance, when he flirted with another online friend just by the window where we laughed at each other’s jokes. He didn’t care about how I felt when he wouldn’t tell me where he was or what happened to him in the past 72 hours. In short, the relationship was getting sour.

But commitment is about this: It’s about loving each other despite the charms of wanting to be single again and patching things up before the day ends. It’s about keeping the promise of forever to the beloved.

I am too tired to hold on, but too much in love to let go.

One day, a friend of mine who happened to be a member of that same online community where I met him got my guy’s number. Needless to say, they began texting each other. When I found out about it, I knew God wanted to tell me something.

There are days when we yearn for our partner’s hugs and kisses, days when we want their love. If we’re lucky to be loved in return, we will have that hug before the day ends.

But on that day, I didn’t receive those hugs and kisses. I did not receive it the next day either, or the following week. He apparently wanted to give that hug, that kiss, that I love you to someone else.

Dating is a thing, but having sex on the first date with someone else while still exclusively seeing someone is another.

It was torture and felt very degrading. What’s worse, I was told that we should stop what we have the day before his date with my friend. He told me that he was pressured by the people surrounding us and that he could not give back what I was giving him.

When I went home, I looked in the mirror and asked myself why he left me. What did I lack? What did I fail to do?

But I guess I should stop criticizing myself. I should have seen the lies from afar: How much he loved me, how much he wanted to keep that love alive, how he said he wasn’t the paasa type, how he’s not the type “na ayaw mabakante.”

The reason why he wanted us to stop? He told me, and I quote, “I wanted to flirt again.” He could only do it, he said, once people stopped seeing us as an item.

So on this Saturday dusk, they met. My guy and his date. Only, instead of my friend showing up, I did. I was about to start our confrontation as I handed him a condom but my friends pulled me away from him.

I now know God’s message. I have realized what I need to remind myself of:

Every year I always wish for the same thing—a boyfriend. Someone to love and who’ll love me back. But now I think I’m going to wish for something else: The wisdom and maturity to realize that I won’t find what I want by just looking for it. The strength not to expect someone else to give me what I never gave myself. I’m not a half waiting to be made whole. If that special person never comes along, I’ll be just fine.

I am stronger now, but a lot more careful. I loved this person, and this is our story. But no matter how much I wanted to justify what he did and what I might have lacked, there will never be a valid reason for cheating.

Christian is a finance person by profession, being a certified public accountant, a Lean Six Sigma Green Belt holder and a TOEIC-certified professional. His true passion, however, lies in training and organization development. He lives with this mother and siblings and “continues his careful and optimistic search for the love he deserves.”