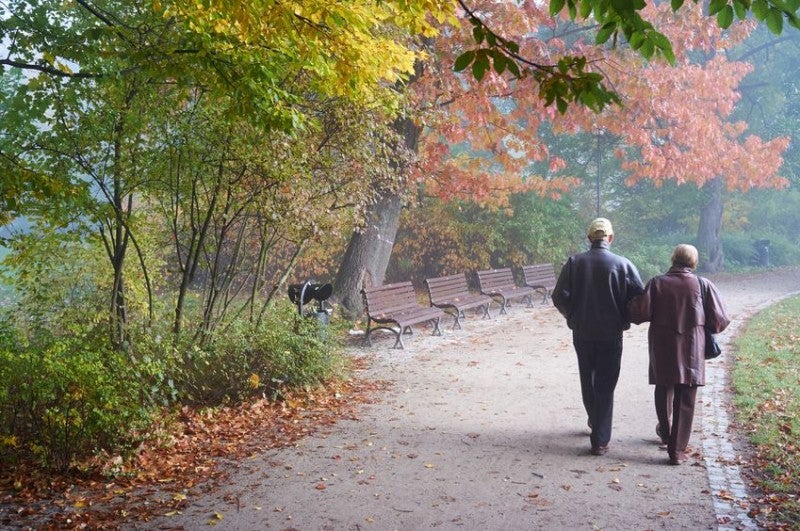 “God gave us each other, and I cannot imagine my life without him.”

It was one hot day. I was holding an umbrella to block the heat of the sun, unaware that he was staring at me. He was following me because, as I later found out, we went to the same secondary school, where I was a freshman and he a sophomore.

After that encounter, he always looked for me during flag retreat and recess time.

This is what he tells me every time we reminisce about those days of courtship.

I was not yet in my puberty when he started to pursue me. I myself was not aware of the matter. I was ignorant on the call of love that I always ran away each time I saw him.

It was during those times when televisions and radios were not yet accessible. The townsfolk always welcomed some medical representative who would show a movie in the town plaza and almost everyone went there.

I too was there, bringing along a chair. Suddenly, he was near me. I wondered how he found me when the plaza was full of people.

My free time during my high school days was spent talking to him. Early in the morning before the bell rang for classes to start, he waited on the path that I passed by on my way to our classroom.

He said I was his first love. He said I was the prettiest lass in school. He said his day was not complete if he would not see me.

He too was mine. It was also my first time to fall in love.

We exchanged sweet nothings almost every day. Not a day passed that we did not see each other.

One afternoon, when he was visiting me at home, my mother told him I was not around. I was at the church because it was my birthday. He then revealed to my mother that it was also his birthday.

Is it coincidence or tadhana that we have the same birthday—month, year and day—on Nov. 20, 1946?

On the day he graduated from high school, I was there to congratulate him and pin his corsage. I had stopped running away from him and accepted his love.

Ours became a distant relationship because I pursued my college education in Manila and his in Cebu. Letters and telegrams were our only means of communication. Pursuing our relationship was not really my priority because I was so busy being a working student in my aunt’s house and in the university library.

Until one night, as I was doing the household chores, I heard a knock on the door. He was there with his older cousin who helped him look for our place. I was not prepared to see him.

It was the start of our renewed relationship. We saw each other more frequently. One day I told him we could not go on with the relationship because my priority was my siblings. After I finish my studies and find work I would be sending my brothers and sisters to college. He knew of my situation but he patiently persevered.

When he found work and I had mine, he proposed for us to marry in a civil ceremony. I forgot all my plans for my siblings and went with his. We got married, had two kids and lived simple lives.

Indeed, as they say, marriage is not a bed of roses. Many times we fought especially when financial problems arose. There were hurt feelings along the way, especially when mistrust was too much to bear. Fighting and shouting were the main course on the dining table. When the tears began to form, so did a feeling of deep regret on the marriage.

But there were also times when love abounded at home, when the friendship came back and sweet nothings were said and felt.

Twice I ran away from home, bringing my children with me, but taking care of two small kids alone would not be an easy task. I went back to our simple abode to continue living with him, my husband.

I continued my role as a wife and as mother, raising my kids into responsible persons. They have since finished their studies and are now living with their own families.

My dear husband and I are back in our hometown where we are spending our retirement. We seldom fight now but we still argue on mundane things. In these senior days, we can either be endearing to each other or be like cat and mouse when we have misunderstandings.

Our birthdays are always a celebration because our friends cannot forget the date. Come Nov. 20 we will both be 69 years old. We try to live each day for the glory of God.

Indeed love conquers all and first love never dies. For all the hardships and sacrifices we remain as one, as we have promised to each other.

I cannot imagine now how I am able to overcome the trials we have been through as a family, as a wife, but I know that it is our love for each other that makes us go on with life, despite of.

He is indeed my tadhana, my first love and, I, his. God gave us each other, and I cannot imagine my life without him.

Erlinda Balamon was a librarian at University of the Philippines in Cebu while her husband worked as a bank manager in Southern Leyte. They are spending their retirement in Bato, Leyte. Their daughter is a nurse who is in California with her twin kids while their son manages a business in Cebu City and lives with his wife and two children.