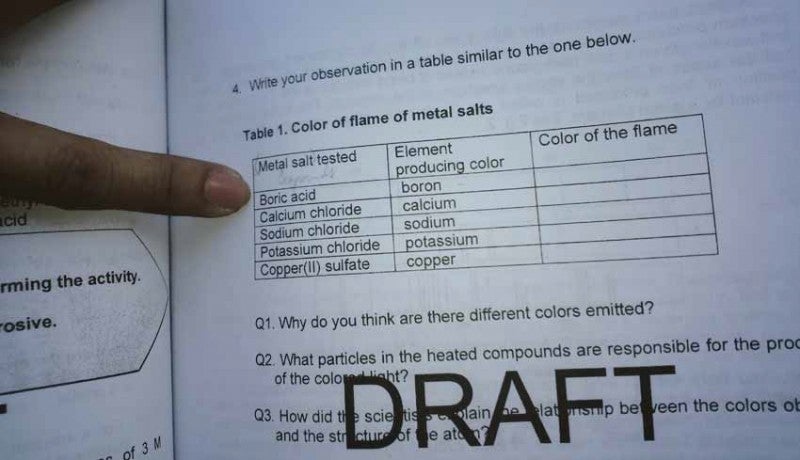 ERROR-FILLED SCIENCE TEXTBOOK Teacher shows her copy of a 2014 Grade 9 “Science Learner’s Material” with the word “draft” stamped across its pages. She points out an entry there—among many errors she has discovered. In a table of colors of metal salts flame, “boric acid” is listed. Boric acid is a “metalloid or semimetal,” the teacher says. FERNANDO DEL MUNDO

The textbook currently being used by Grade 4 pupils studying in all public elementary schools in the Philippines carries the totally unimaginative nontitle of “English Learner’s Material.”

“Abysmally plain and simple” are the two understated and euphemistic adjectives that describe not only that title but also the lessons, skills, competencies and the overall content of this textbook. Many of the words, phrases, sentences and stories are so bereft of sense and sensibility, so without rhyme and reason, that you can’t help but wonder where the authors got the gumption to call it a “learner’s material.”

The competencies had been so lowered that this Grade 4 book actually reads like a Grade 1 or Grade 2 book! I get it that the K-12 curriculum wants to promote mastery of subject matter, but shouldn’t Grade 4 pupils have mastered the elementary skills of alphabetizing (pages 117-119), distinguishing shapes (pages 132-133) and pronunciation of common sight words while they were still in Grade 1 or Grade 2?

“Every day,” a two-word adverb of time, is written all over the book as “everyday,” which is an adjective. The topics of Glossary (pages 276-278 and 361-365) and Index (pages 290-294, 304-305, 373-375) were repeatedly and intensively discussed when the book itself does not have a glossary nor an index! The book’s graphic artist, Reynaldo A. Simple, appends his signature on each and every crappy drawing that he did, as if these were outstanding works of art, when he can’t even draw a proper plate (page 240)!

“Jackie learned in Science class that pieces of moon rock fall from the sky. That is why she keeps a helmet and a shield by her bedside at all times. She also keeps her eyes on the ceiling until she falls asleep.” When you present a story like this, what knowledge, skill or value did you teach the readers? Did you not in fact teach them to be very, very stupid?

But the thing that really, really bothers me is the fact that no less than 12 authors and five consultants and editors—all five of them with Ph.D.s—cobbled this book to the grotesquery that it is: weak and infirm, deficient and defective. Despite the boast that it was “collaboratively developed and reviewed by educators from public and private schools, colleges and universities,” this 432-page Grade 4 textbook published by the Department of Education (DepEd) contains more than 400 errors!

I reviewed the book and wrote its corrigenda (a list of corrections of errors) in six days. It’s almost as if I had rewritten the book! By pointing out the errors, I have, in fact, already corrected them. If a mere high school graduate can do all these, I cannot for the life of me understand why, with all of its human, material and financial resources, power and authority, the DepEd cannot come up with textbooks that really teach, textbooks from which the students can really learn!

Dina S. Ocampo, Ph.D., listed in this book as DepEd undersecretary, in a letter to the editor that was published in the Inquirer on Oct. 19, 2004, said: “Content accuracy is the bottom-line criterion of a quality textbook. Errors in content like factual errors are not debatable.”

And so it is. Sorsogon Bay is not home to whale sharks, which do not grow and play there everyday. They cannot hide within the corals, under the sand or behind a boulder. Whale sharks cannot play patintero! No one uses coconut trunks as posts for buildings. No one uses charcoal in ironing clothes. There is no adjective in the sentence “They save people.” Fireflies cannot dance around the moon. Bees do not build nests of sticks. Bees do not sing and sing. Spiders do not leap into the air to catch their prey. Dolphins and whales are not fish. You cannot put nine kittens in a book. When you “pick a wallet,” it means that you are “stealing its contents.” If the tail of a whale slaps you, you die!

And, by God!, pancakes and hotdogs are not cooked! With more than 200 errors, the learner’s material titled, “Let’s Begin Reading in English,” used by Grade 2 pupils in all public elementary schools, is yet another sick book. The term “cook pancakes” (“Who cooked pancakes?” “I will cook pancakes.”) appeared an incredible 11 times in this book, as if “cooking” pancakes is the most normal and natural way to make or prepare them, as if there is no other way to say it but that way! When food is made to undergo a long process of either boiling, baking or roasting, we call that process “cooking.” Thus, we say: My mother cooked kare-kare, paella and adobo for my birthday. She also made pancakes and prepared hotdogs for the kids.

“Let’s Aim” is the heading of the preliminary statements or questions that precede or introduce every lesson in the book. There being 40 lessons per unit and there being four units, this expression appeared an astounding 160 times in this book! The thought or message it conveys is vague and incomplete. As an intransitive verb, these are the correct uses and applications of the verb “to aim”: “We aim at pleasing everyone. We aim to please everyone. She aims to go to Cebu tomorrow. I always aim at perfection.” Because an object is needed when the verb “to aim” is transitive, we say: “Aim your gun and hit the target” or “ My latest article aims a satire at hypocrisy in the academe.” The correct title should either be “Let’s Take Aim” (an idiom meaning “to sight a target”) or “Let’s Focus” (meaning “to concentrate one’s thoughts”).

The word “gun” (complete with illustration) appeared five times in this book, while “pickpocket” appeared six times. The writer of seven stories was listed as “Teacher Nong,” as if the real author knew how bad the stories were and he/she was in fact ashamed to admit that he/she wrote them!

How can this Grade 2 textbook have more than 200 errors when it was published by the DepEd itself and had no less than six authors? Can you rightfully call yourself a Doctor of Philosophy when the things you do belie that? Children are not playthings and the classroom is not a playhouse. The writing of textbooks, which is teaching in written form, is not child’s play. Is the quality textbook really such an impossible dream? When shall we awaken from the sick and sickening daymare and bad dream that is the error-ridden Sick Book? When will the carabao be totally free of its yoke?—Antonio Calipjo Go, Contributor