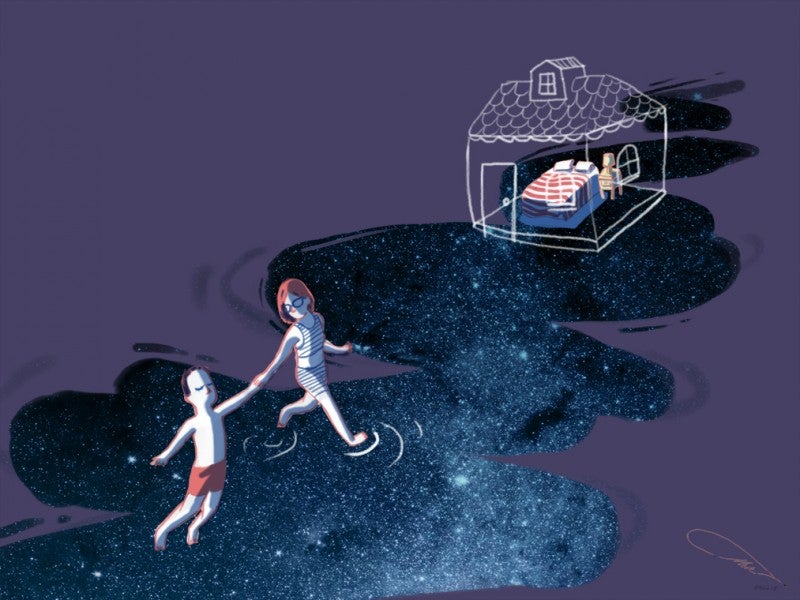 I knew what I was getting myself into when I decided to marry him—especially when it came to the aspect of sharing his bed.

Nothing could have prepared me, though, for our first honeymoon night.

Elated but exhausted after a day of roaming Hong Kong’s streets in the chilly December weather, we said our sweet goodnights and went to bed in our cozy hotel room. I was deep in dreamland when, suddenly, a bright light jolted me awake. My first thought: Daytime already? But a quick look at the clock showed that it was only 2 a.m. I then saw my husband standing—eyes open but dazed—by the light switch panel and realized he had flicked on the main one which switched on all of the room’s lights.

I finally realized what was happening—I was getting my first taste of my husband’s sleepwalking.

He had taught me what to do should the inevitable happen: I simply needed to call out to him, instruct him to come back to bed, and he would follow—which I did that night, and it worked like a charm. The night passed without any other incident, and by morning we were laughing about what happened, which I recounted because he typically has no memory of what he does when he sleepwalks.

That is, until my husband saw what he did to our hotel room door. Apparently, before turning on all the lights, he had opened the door and left it that way by placing the upper latch between the door and its frame.

I was amused and horrified at the same time—our door had been open the whole night! (Thank goodness we were in a safe neighborhood.)

While he had no memory of opening the door or the room’s lights, he vaguely recalled what he had dreamt of, which explained his actions: Our wedding day. He recalled doing the same thing to his hotel room door then so he wouldn’t need to keep using his keycard to rush in and out of the room, as it was such a busy day for us.

Almost two years as his wife, I’ve gotten used to all the weird things Ryan does in his sleep. I’ve woken up to him running panicked around the room, thinking we were late for my ultrasound appointment (it was 3 a.m.); standing on the edge of the bed poised to shoot a basketball; tugging at my arm, exclaiming I might fall into a fiery pit; and also, sitting quietly on the bed, legs outstretched, and butt naked (no, I did not take advantage of the situation, haha).

Sometimes he doesn’t get up but just initiates conversation. He usually falls asleep ahead of me, and one time while I was still up reading, he suddenly faced me and worriedly asked, “Do you have your water tumbler beside you? When you’re hungry, do you eat?”

I knew he was asleep and could barely contain my laughter. The minute I said yes, he turned his back to me and closed his eyes, apparently satisfied with my answer.

Another funny convo: He blurted out the name Gina one night. “Gina who?” I asked, unaware of any Ginas among his friends and colleagues.

Again, he couldn’t recall what he had said, but we figured it must have been because were talking politics during dinner that night and the De Venecias came up.

Ryan has been talking and walking in his sleep since he can remember. According to a specialist we consulted with, it’s a condition common among children and is something they usually outgrow, making my husband a special case.

The doctor said his nighttime episodes were a sign of disturbed sleep, and gave him tips on how to achieve more peaceful slumber: Exercise regularly; sleep at least 7-8 hours a day; don’t watch TV, browse the Internet or read right before going to bed; sleep with the lights off and keep the room quiet. (I find that Ryan sleeps better when I give him a massage right before we retire for the night.)

However, if we really wanted to get to the root of the problem, the doctor recommended that Ryan take a special diagnostic sleep test, which would require him to spend a night in the hospital hooked up to a machine which would monitor his sleeping pattern. I will need to be there with him to supervise and make sure he doesn’t wander off in his sleep.

The test is a bit expensive but we’re saving up to have it done soon, especially now that we are expecting our first baby and fear he might walk out of the bedroom with our little one in his sleep.

For now, I find that my husband’s nocturnal ramblings and “escapades” are quite manageable. I guess it’s a good thing, too, that I’m a light sleeper, and am easily roused by any sudden movement by my spouse. I can almost always tell now whether he’s sleepwalking or is actually awake and just needs to go to the bathroom.

(He fooled me one time, though. I had gotten up to tinkle at around the same moment he jumped out of bed and rushed to the door. I assumed he was sleepwalking, of course, but didn’t stop him from following me to the bathroom just the same to see what he would do. However, when he peed, too, after I did, I thought, oh, I guess he really was awake! I told him about it the next day, and guess what? he had no memory of it—he sleep-peed!)

Besides, I find that Ryan has a recurring sleep-talking episode which has become my favorite. He faces me, smiles, takes my hand or pats me reassuringly on the arm, and says very clearly: “I love you, hon.”

At least I can sleep well knowing that I’m—literally—the woman of his dreams.

Annelle Tayao-Juego is a reporter for the Metro section of the Philippine Daily Inquirer. Her husband Ryan graciously gave her full permission to write about his sleepwalking—including the embarrassing details.