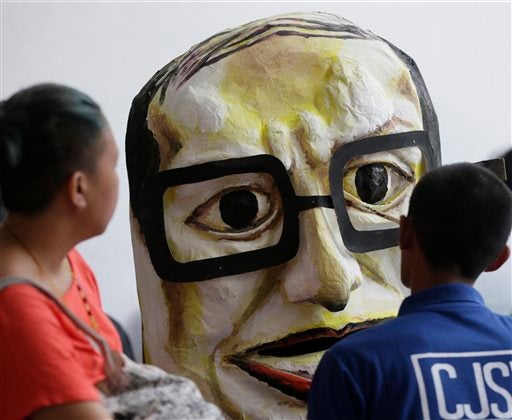 A protester puts finishing touches on the effigy of Philippine President Benigno Aquino III which will be used for a huge protest to coincide with Aquino’s last State of the Nation Address at suburban Quezon City on Saturday, July 25, 2015. Aquino has refocused Sona’s keynote to his announcement on whom he would endorse as official candidate of the ruling Liberal Party in the May 2016 general elections. AP PHOTO/BULLIT

On the eve of President Aquino’s sixth and final State of the Nation Address (Sona), his administration refocused Sona’s keynote to his announcement on whom he would endorse as official candidate of the ruling Liberal Party (LP) in the May 2016 general elections.

Weeks ahead of the polls, the nation has been in the throes of febrile anxiety over the issue of the anointment of his successor. In doing so, the President not only shifted public attention to the succession, away from the central function of Sona, that is, rendering an accounting to the people of what his government has done for the nation during the past five years to justify his presidential mandate.

The 2015 Sona is extraordinary in more ways than one: First, it sums up the performance in office of the administration for five years—not just his first, when his slate was clean; secondly, it sets the tone of national discourse for the next 12 months up until the day he steps down because for the first time he will be telling the nation the person to whom he would entrust its leadership for the next six years.

The spectacular atmosphere of this transfer of power is something like the pageantry surrounding the coronation of the dauphine of the French monarchy, as the new king of France, in ceremonies at Reims Cathedral in medieval France.

Sona is more than telling the people who among the aspirants for the highest office in the republic enjoys the presidential blessing to be his successor who would ensure the continuity of his good governance reforms. It is an extremely important public document that serves as an inventory of the performance of a democratically elected government consisting of what it proposed to do and failed to do in previous Sonas of the past five years.

This annual report serves to fulfill the function of accountability of any government. But by highlighting the event that the President would use it as a platform to announce his succession preferences after his Sona speech, he has downgraded the importance of Sona as a documentary mechanism of rendering public accountability to enable the public to determine whether he has squandered the resources and powers of the presidency to deliver benefits for the general public good according to the programs spelled out in previous Sonas.

From the way the administration highlighted the Sona in response to public clamor to declare the President’s preferences on who would receive his endorsement, it appears to us that using Sona as a platform to announce his succession decision is a glib cop-out to divert public attention from the serious task of scrutinizing the contents of his last Sona.

It would be brazenly presumptuous for anyone to comment on the contents of Sona until after the President has delivered it to determine what it claims as the achievements of his five years in office and what shortfalls it glosses over.

After the delivery of the last Sona, there will be more than enough documentary data, consisting of the previous Sonas to assess what the President has promised to do and has failed to deliver, on issues such as inclusive economic growth, poverty reduction, the threat of China’s territorial aggrandizement in the West Philippine Sea, land reform, safe and efficient public railways, and food sufficiency. These are the parameters with which to measure the claims of Sona. They raise many questions Sona has to address.

The highlight of the succession issue not only trivializes Sona but also diverts public attention from the hard issues enumerated above. Sona illustrates the process of Question Hour in a parliamentary democracy through which elected leaders are put on the carpet by congressional deputies of the people for accountability on their mandate to rule.

Prior to its delivery, publicity on the Sona had centered on the color and trivia (such as the fashion show on the ternos of the congressional ladies and the design of the barong of their spouses), and on the efforts of Mr. Aquino to form a coalition of political parties that would back his decision on whom to endorse as the administration’s candidates for President and Vice President next May. Malacañang handouts emphasizing the selection process left the impression that it was the centerpiece and keynote of Sona—not its contents.

Let us not forget that Mr. Aquino will deliver his last Sona at the twilight of his presidency when his popularity has declined and when his clout to influence events has diminished. There is little time left in the last few months to rectify the errors of the past or to push the initiatives proposed in the Sona. It is his swan song.

While we wait for his delivery of the Sona, Malacañang has stepped up the presentation of Sona as a bread-and-circus spectacle reminiscent of the triumphal parade of Julius Caesar on the Forum after his conquest of the Gaul region.

We are not sure Mr. Aquino’s Sona will be hailed with accolades of “Ave Caesar” from the adoring multitudes in the streets, but we know from experience the cavernous congressional gallery at the Batasan will be jampacked with herded sycophants who, at the slightest prompting, will explode with thunderous applause every punchline of the speech.

The media will dutifully report the number of applause for the speech, but only the naïve will claim the noise echoes the rabbles’ approval of Sona’s fantastic claims.

Meanwhile, the beneficiaries of the President’s anointment are left hanging whether the endorsement is a kiss of death or a bounty. It’s a blade that cuts both ways.