Real score on funds for Bangsamoro 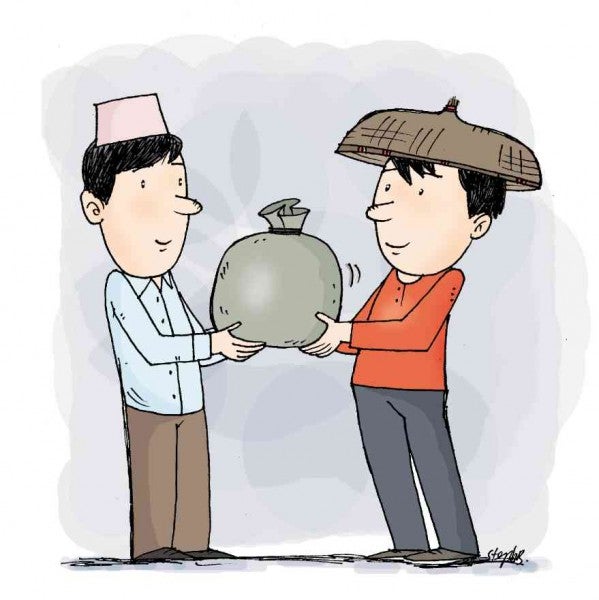 The size of the funds to be transferred to the Bangsamoro has added fuel to the flames of the controversy over the draft Bangsamoro Basic Law (BBL). Estimates have ranged from P37 billion to P70 billion in the first year alone.

These have been described as an “additional cost” to be borne not by the Bangsamoro but by the rest of the country, whose taxes will support these allocations. (“I thought they will [sic] be autonomous or operating on their own but they are actually getting double the amount.”1 “Please do not take away the money that we work so hard for to support something beneficial only to them in particular.”2)

The money has been compared with pork barrel funds and the track record of the Autonomous Region in Muslim Mindanao (ARMM), which was formed in 1989 and further enhanced in 2001 (through Republic Act No. 9054), has been invoked to demonstrate how inefficiently these funds are likely to be used. (“We created an inefficient bureaucracy in ARMM at nawala ang pera. Ngayon eto na naman, enhanced ARMM which we are renaming BBL, at popondohan na naman ng malaking pera mula sa bulsa ng taongbayan.”)

The proposals have also been challenged on equity grounds, with objectors questioning the advantage of the Bangsamoro over other local government units (LGUs). (“The central government is willing to grant advantages in terms of taxation, use of natural resources, block grants for the next 10 years, etc. Why not the same privileges for the LGUs of Mindanao? Why the advantage for the Bangsamoro?”) One legislator asked: “What is the guarantee of peace in Mindanao after we finance it with billions of pesos?”

To its credit, the negotiating panel has already given the obvious answer to the last question—which is that there is no guarantee. Peace, like development itself, is a continuing process and even the BBL can only hope to provide a better foundation for a lasting solution. The concern for equity can likewise be met with the obvious answer: it is the 1987 Constitution itself that gives more powers to autonomous regions (in Muslim Mindanao and the Cordilleras) than to LGUs. If people have a problem with that principle, then they should change the Constitution.

All that is really left to examine here therefore is: Will proposed fund transfers be as costly as described? Is this really just a pork barrel? What is in it for the rest of the country?

It turns out little is involved by way of “additional” funds to the Bangsamoro compared with what the region would have received anyway and funds are not pork. What is involved is an internal revenue allotment (IRA)-like grant to the Bangsamoro which all regular local governments already enjoy but which the ARMM never did. The fiscal control represented by this block grant is not a guarantee for sustained peace but is a necessary anchor for it. Also necessary is a multiyear intensive rehabilitation effort without which the risks of armed conflict recurring is high but for which a “Special Development Fund” (SDF) contemplated in the BBL is insufficient.

The debate really revolves around a handful of enhancements to the taxing powers and revenue sources of the Bangsamoro that the draft BBL proposes relative to what is granted to the ARMM by current laws (i.e., the original and the expanded Organic Act for ARMM [RA 6357 and RA 9054]). These enhancements are as follows:

Such enhancements sound generous, even profligate—until one really bothers to look at the numbers.

To begin with, the proceeds from the first three enhancements enumerated above are marginal. From 2011 to 2014, ARMM collections of the four taxes in question averaged only P31 million per year at most; not much more is expected in the coming decade. See Table 1. Likewise, the shares of the ARMM regional government and LGUs from “national internal revenue taxes, fees and charges and taxes imposed on natural resources collected within the area of autonomy” hovered around P462 million per year since at least 2008, implying a total collection from the autonomous region of around P660 million per year.3

Increasing the region’s shares by five percentage points would therefore mean no more than P33 million more per year; the retention of national government’s share would mean another P165 million per year. There are no revenue projections from the utilization and development of metallic minerals (there has been no activity in this regard), but no matter: incremental amounts to the BRG from the above enhancements will be offset in any case by equal deductions from the annual IRA/block grant by the fourth year of Bangsamoro operations.

Then there is the “block grant.” It turns out this is not much of an increment either. Relative to the size of the national government share in national internal revenues, the annual appropriations to the ARG were about 2.9 percent in the early 2000s, rising to 4.3 percent in 2015. The size of the block grant will be a consistent 4 percent. See Table 2.

The difference, however, is that the ARG, treated as an “agency” of the central government, heretofore has no allocative control over these funds (i.e. “… amounts appropriated herein for the programs of the agency shall be used specifically for the following activities in the indicated amounts and conditions”), whereas the BRG will have allocative control over the block grant (just as LGUs have over their own IRAs).

The real value-added in the block grant is not in any additional amount but in the predictability and fiscal control it introduces—features that can be important advantages for the BRG over the ARG, even if trends indicate that the ARG would have received similar percentages in any case.

Even this advantage must be qualified in two respects.

First, the block grant must first cover the BRG’s regular operations, including employees’ salaries, operating expenses, capital outlays and regular projects under the agencies of the Bangsamoro.

Historically, however, personnel services—a large part inherited from the central government—already claim the bulk of these funds, i.e. an average of 68 percent per year. See Table 3.

This would be less of an issue if only quality of bureaucracy came with this spending, but within the ARGs bloated bureaucracy—36,000 at last count—at least one-third “were just hired on temporary basis for lack of qualifications.” 4

Overhauling and professionalizing the regional government bureaucracy—which its proponents say is the intent of the BBL—will be a political minefield. To provide an example, critics who cite the inefficiency of the ARMM also ask: “Pagka na-reorganize, sila ba ang ilalagay ulit o etsapwera na sila?”

Second, the autonomous region received much more than its agency allocation. Figure 1 shows transfers in the form of program funds from national government agencies (NGAs) for projects implemented within the territory. However, not all NGA program funds are explicitly disaggregated by region in budget documents. There are NGA “nationwide” or “central office” appropriations, which find their way to regions and which together even exceed the allocations of all regions combined. To give an idea of the scale of the latter, a special inventory of the period 2001-2005 by INCITEGov (2007) indicated that total NGA program funds disbursed in the autonomous region amounted to P12.95 billion, almost 50 percent of appropriated funds to the ARG (P26.89 billion). But again the ARG had no allocative or disbursement control over these funds and was not even aware of their extent.

This disconnect largely explains the opposing views regarding the poor performance of ARMM, with central government policymakers, on the one hand, claiming that the ARMM was awash with cash that is poorly managed, and ARMM officials and stakeholders, on the other hand, insisting that it was crippled by lack of funds: “How can ARMM survive and develop on a measly P5 billion (a year)?”

The point is that simply to keep itself afloat, the Bangsamoro may require more resources than the draft BBL specifies. Section 21, Art. XII of the draft BBL provides for additional resources for a period of five years but these amounts remain to be negotiated.

Even more is actually needed to give the region a chance to make up the gaps in physical and human capital between itself and the rest of the country. The gaps are huge: life expectancy in ARMM is below the national average by 19 percent (59.2 years in ARMM, 73.4 years elsewhere), average schooling below 27 percent (6.7 years in ARMM, 9.2 years elsewhere) and per capita living standards, measured in 2012 National Capital Region pesos, below 54 percent (P22,945 in ARMM, P49,903 elsewhere).

Overall, ARMM has a human development index (HDI) that is barely more than one-third the country average. This deficit reflects the human and social costs inflicted by decades of armed conflict—deaths, disablement, disruption in basic services and diaspora—costs which far outweigh straightforward economic losses in terms of long-term development prospects.

Intensive rehabilitation is the motivation for the six-year SDF in the BBL, which will total P17 billion: P7 billion in the first year and P2 billion per year for the next five years. The SDF is analogous to provisions found in RA 6734 that provided for P2 billion in annual assistance for five years to fund infrastructure projects and in RA 9054 that committed central government to provide infrastructure funds for six years, although amounts were not specified.

However, international evidence [Collier, 2007] suggests that, as a first step in a long process to social peace, at least 10 years of well-selected and well-sequenced investment and technical assistance are needed for a country, postconflict, to hurdle the economic conditions—low income and slow growth—that increase the likelihood of a relapse into conflict.

Benchmarked against this and against third-party estimates of urgent rehabilitation investments in power and water (P28 billion), strategic human resources (P18 billion) and connective infrastructure (P97 billion, excluding new construction), the SDF may be too small and its time horizon too short.

The bottom line: the national government will “forego” about P129 million annually in favor of the Bangsamoro—maybe a bit more if any metallic mining revenues kick in—but this will only be for four years. By comparison, the Napoles scam freely gave away P1 billion of public money annually for 10 years to embezzlers and their lawmaker-accomplices.

The special fund of P17 billion over six years is meant for rehabilitation and reconstruction. But even this is only 12 percent of what the Bangsamoro really needs.

And what is in this for the rest of the country? Nothing more and nothing less than a better chance for sustained social peace. After more than four decades of war and “development in reverse” in Mindanao, the BBL and the modest transfers it involves are society’s hedged and hopeful bet on the future, the nation’s way of saying “Enough!”

Rather than conjuring up bogeys and playing the tired political game of pitting ethnicities, localities and religions against each other, perhaps it is time the critics also looked wider and farther, and considered the nation’s larger good—for a change.

4 Testimony of Office of the Presidential Adviser on the Peace Process Undersecretary Jose Y. Lorena on June 2 in the Senate.

(Toby Monsod, Ph.D., is an associate professor at the University

of the Philippines School of Economics and a member of the Human Development Network.)