FOR MONTHS, the government has been preparing for a power crisis expected this summer. As explained by Assistant Director Irma Exconde of the Department of Energy (DOE) to Congress in 2014, the coming crisis would involve a 31-megawatt (MW) shortfall in supply in Luzon for around two weeks in April.

The DOE wants to ensure a reserve of 647 MW. 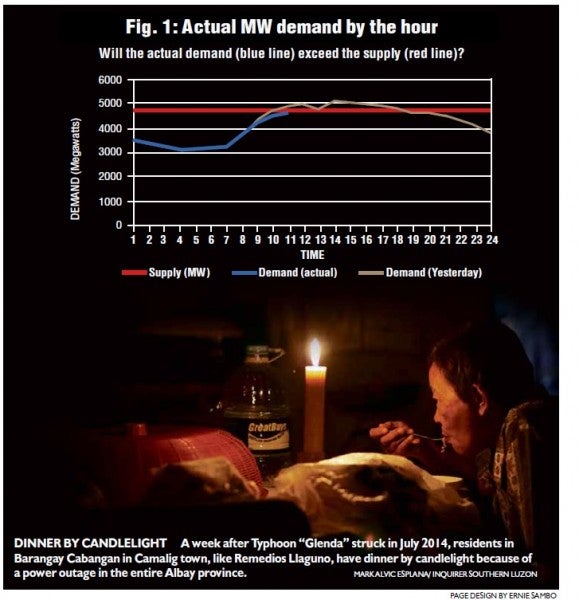 The government’s response to the projected power crisis is the Interruptible Load Program (ILP) that would cost P450 million to be passed on to all electricity consumers or paid with public funds.

It is possible to avoid summer brownouts without spending P450 million. We need instead leadership by the government, support by the media and participation by electricity consumers, bayanihan style.

The key is a real-time screen display: The graph of a service area’s consumption of electricity (called the “load curve”) and above it a horizontal line representing the actual supply of electricity.

The DOE should be able to get this graph from Manila Electric Co. in the case of Metro Manila, or the private utility or electric cooperative covering a particular service area. (See Figure 1.) A real-time display like this creates immediate feedback that will encourage consumers to switch off nonessential loads.

Imagine this real-time display broadcast live on free TV and made available by the DOE online, so that consumers can watch its progress at home or in their office. This will create immediate feedback, making high-tech bayanihan possible.

With feedback, this scenario is now possible:

Toward late morning, when the load curve starts to approach the supply line, the energy secretary or the President himself goes live on TV, asking everyone to watch the graph on their TV screens and to switch off their nonessential loads, such as lights in unused rooms or along corridors and one of three electric fans, and to postpone ironing to off-peak hours and so on.

Demand curve
As the responses come in, the demand curve takes a noticeably less steep path, but it keeps approaching the supply line. The tension is becoming unbearable. On radio and TV, the government sends out another desperate appeal. Seeing that their actions did make the progress of the curve less steep, people will respond some more and urge others to act too.

A critical mass of people now realizes that it is better to turn off some appliances on his own than lose all power. Social media are abuzz; text messages fly; people encourage their next-door neighbors to participate.

Watching the load curve now feels like watching live on TV a typhoon that is about to hit. But it is swerving, thanks to people’s earlier responses.

If the curve swerves enough to miss the supply line, one can surely imagine a collective cheer in every home and office where people are watching the screen, as if Manny Pacquiao had just scored a knockdown. But this time, it is everyone’s victory.

If the curve hits the supply line, a brownout happens somewhere in the grid, as the system sheds some load to avoid overheating the generating plants. One can imagine hearing a collective sigh throughout the island.

Imagine doing this every day over a two- or three-week period, as we collectively struggle to spare the country from brownouts by pressing one switch and then another. It will be the greatest drama of the summer break.

Young people will see it as a multiplayer online game played remotely, using switches at home or in the office instead of a joystick. But this one is no make believe; the stakes are real. The goal: To make the load curve swerve away from the supply line. Prize for the day: No brownouts. Total stakes: P450 million.

Consumers will join this bayanihan for at least four reasons:

It is better to switch off some nonessential loads than to lose all power.

The electric bill of those who join will go down in three ways:

– Lower price (peso per kWh) of electricity because expensive peaking plants do not have to go online; and

– Consumers will avoid the additional charge that will be imposed to finance the P450-million ILP.

Lower consumption is good for the environment because it reduces pollution and greenhouse gases emitted by fossil-fueled plants.

It promises to be a great summer “game.”

All four are a compelling motivator for the public to join the bayanihan. All we need is the immediate feedback and the government’s lead.

Even if the ILP is already in place and its few hundred corporate participants are ready, the public deserves this chance for a first shot at beating the summer brownouts. After all, the consumers stand to lose P450 million if they just watch on the sidelines.

After the Earth Hour observance on March 28, presidential spokesperson Abigail Valte called on the people to switch off their lights not just for an hour each year but daily. This is exactly what we need to do in the context of the expected summer power crisis. All that is missing now is the immediate feedback—the live display of the actual demand.

The government should take the lead on this one. It is rare that an opportunity like this for uniting the public presents itself. The value of a collective victory against a major problem facing the country, especially in these toxic times, cannot be measured in millions of pesos alone.

(Roberto Verzola is the author of the newly launched book “Crossing Over: The Energy Transition to Renewable Electricity,” published by the Friedrich Ebert Stiftung. The full-text PDF version of the book may be freely downloaded from the web. Just google the book’s title.)