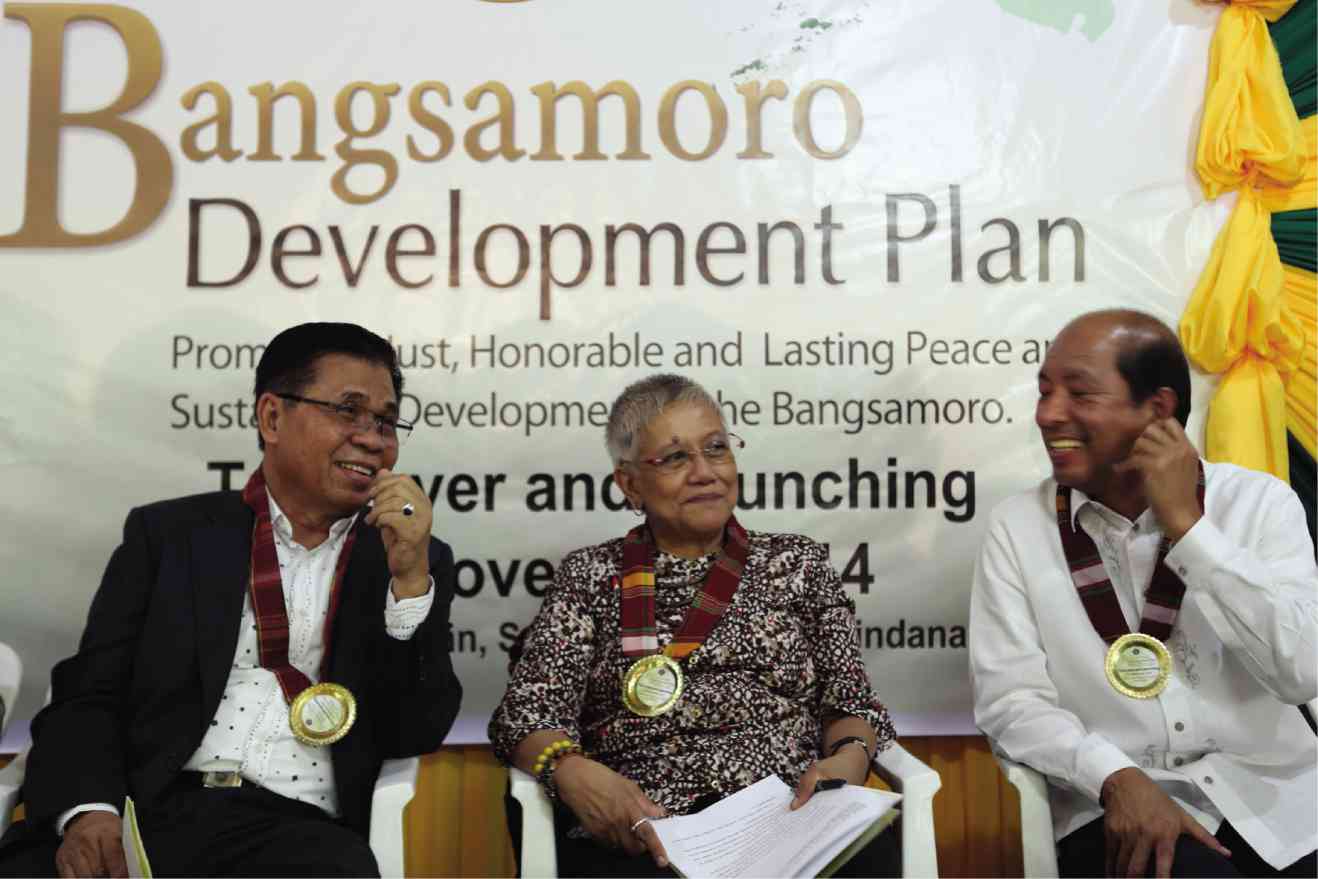 BUDGET Secretary Butch Abad (right) with Moro Islamic Liberation Front chair Murad Ebrahim and Secretary Teresita Deles of the Office of the Presidential Adviser on the Peace Process at the handover ceremony on Nov. 2 of the Bangsamoro Development Plan at Camp Darapanan in Sultan Kudarat, Maguindanao. JEOFFREY MAITEM/INQUIRER MINDANAO

The Comprehensive Agreement on the Bangsamoro and the proposed Bangsamoro Basic Law (BBL) have caught the attention of business groups in search of new opportunities in agribusiness, manufacturing, energy provision, mineral exploration and financial services.

However, fear still grips business due to many uncertainties in the transition process. Few see the development possibilities and the economic momentum that can be unleashed as the region and its transitional leadership secure the political legitimacy and authority that can be provided by the BBL.

The potential for jump-starting the Bangsamoro economy and securing lasting economic benefits can be assessed in the trend of fixed capital formation in the region. Capital formation saw an upward trend starting 2011 in the Autonomous Region in Muslim Mindanao (ARMM), though it remained the slowest among the regions in Mindanao and the country in 2011-2013.

However, the certainty of increased government funding and international development aid infusions into the local economy can go a long way in reversing this trend. A lot of business can be made in bidding for the implementation of infrastructure projects, such as roads, bridges and irrigation systems reflected in the Bangsamoro Development Plan and for the promotion of enterprise development in the provinces and towns of the Bangsamoro.

Private construction and investments in durable equipment, breeding stock and orchard development, and intellectual property products are expected to flourish as a result of growing confidence in the stability of the Bangsamoro.

2. Increase in government spending per capita

Economies in transition that are at the infancy stage of growth and development are often targeted for pump-priming. There is no reason to deny this to a region long neglected by the central state. Pump-priming comes in the form of increased government spending, or the provision of risk-aversion instruments to encourage private investments. 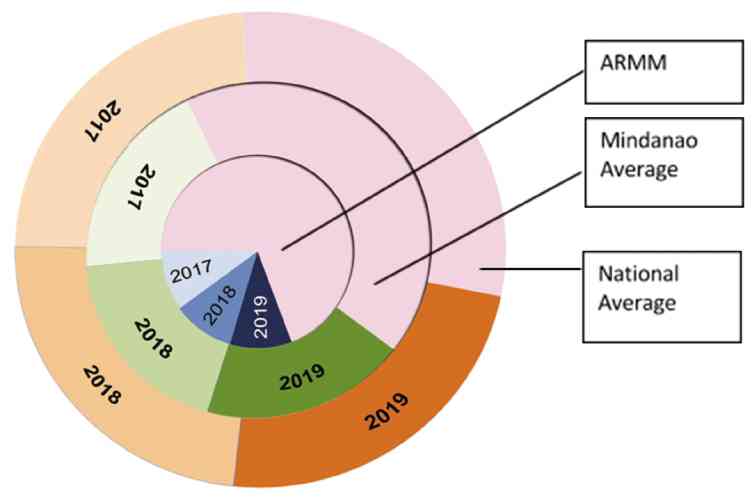 With the passage of the BBL, the Bangsamoro will receive block grants from the Philippine government to equip the regional government with the crucial resources that can facilitate the transition and address the socioeconomic needs of its constituents. This will result in a vibrant market and a wider consumer base for food and other manufactured products in the region.

By the end of 2016, the government final consumption expenditure per capita in the Bangsamoro may be higher than the national average.

Violent conflict has left large tracts of land outside the reach of the formal property market, especially in conflict-affected areas. Much of the region’s fertile agricultural land is idle or underutilized. The BBL begins the process of clearly defining and strengthening local property rights—probably in a much better way than in other regions with competing land management systems.

The retirement of rebellion-related violence will go a long way in opening up new land for cultivation. If the transition authority is able to make deeper inroads in the settlement of horizontal conflict emanating from persistent clan feuds over land issues, land disputes will decline, the collateral value of land will increase and new investments will be made to raise productivity.

Agriculture, agribusiness and fisheries are the sunshine industries that are being encouraged in the Bangsamoro. There are reports of agribusiness groups, such as those in the banana industry, that are gearing for wide-scale transfers to the Bangsamoro for obvious reasons.

Eastern and southern Mindanao is becoming a less-preferred agribusiness site due to climate vulnerability.

There are no New People’s Army units in the Bangsamoro demanding revolutionary taxation.

There are fewer problems associated with land use and management that result from the incoherent and often conflicting rules and priorities under the agrarian reform law, the Indigenous Peoples Rights Act and the Local Government Code.

Indeed, the bigger challenge to the Bangsamoro parliament is to enact laws that continue to sustain and promote business investments while ensuring coherence among the various social justice provisions in competing land laws that protect the rights of peasants, indigenous people and rural women.

Besides, the limited investments in agribusiness and enterprise development will be a thing of the past. The implementation of infrastructure projects, such as farm-to-market roads, solar driers, storage and trading facilities, irrigation systems and the provision of farm equipment and facilities, will boost agricultural production efficiency.

The entry of logistics providers and the tapping of existing markets in the BIMP-Eaga (Brunei, Indonesia, Malaysia and the Philippines-East Asia Growth Area) and the Middle East will further strengthen and stabilize value chains in agricultural commodities.

4. Boost in domestic and foreign trade

As stability and confidence grow in the region, and once the infrastructure gaps have been fully addressed, the Bangsamoro can potentially become an important origin and destination of commodities flowing across the Philippines and adjoining countries in East and Southeast Asia. 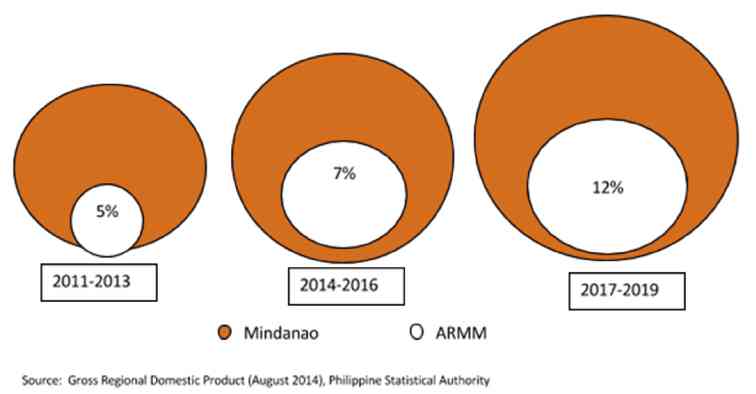 The region is strategically located in the BIMP-Eaga, and it can become an active player once connectivity is secured. The halal food market, which has an estimated value of $661 billion, is one of the largest markets that the Bangsamoro can target within the BIMP-Eaga member countries and the Middle East.

The Bangsamoro is also the largest seaweed producer in Mindanao, accounting for more than 70 percent of the total production on the island. Once processing plants are established, the Bangsamoro can be a major producer of seaweeds and other raw materials for food, pharmaceutical and industrial products.

The high reliance of Mindanao’s economy on hydropower as a source of cheap energy has caused the island’s high vulnerability to power disruptions. The lack of reliable energy hampers business operations and adversely affects the health of the overall economy. The situation is a lot worse in the Bangsamoro because a significant number of households and communities continue to have poor access to stable electricity.

The exploration of new energy sources will become a major priority as soon as the Bangsamoro opens up its economy to investments. There are potential oil and natural gas fields in the Bangsamoro waters, including in inland areas such as the Liguasan Marsh.

6. Strong inflow of investments in transportation, storage and communication

As agribusiness and enterprise development moves at a faster pace, and as domestic and foreign trade grows as a result of improved market efficiency and stability, there will be stronger demand for transportation, storage and communication facilities.

Local and foreign investors are expected to infuse fresh funds, particularly in 2017-2019, for the provision of transportation, storage and communication facilities as the cost of doing business declines significantly and as market players gain confidence in local institutions.

Substantial improvements in basic facilities, such as access to electricity will trigger demand for communication services from the public and private sectors, enticing service providers to put up new investments.

A sustained double-digit growth rate in the region creates a profitable market for transport, storage and communication providers. These in turn can substantially contribute to the overall growth rate in Mindanao and the country as a whole.

7. Boost in microfinance and banking

Financial intermediaries facilitate the efficient transfer of goods and services. However, most of the credit available in the Bangsamoro is provided by the informal credit market. Studies show how informal credit systems are often linked to horizontal violence and makes local people vulnerable to financial scams.

The high cost of borrowing and the high risk of investing limit economic activity, especially among the enterprising poor. New instruments and facilities that are now available through Islamic banking and finance are being designed to enable the easier channeling of funds between lenders and borrowers. With formal financial institutions in place, investors will be enticed to infuse fresh funds to reduce the costs of doing business.

There are other reasons business groups should invest in the Bangsamoro at the earliest possible time, but the Magnificent 7 (list of development outcomes) is foremost. The immediate passage of the BBL provides the first light, sustaining the economic momentum, but making development more widespread requires much more.

It would be unwise to bet against the passage of the BBL. The BBL carries the capacity to change the psychology of the region. It is the best prescription for stimulating legitimacy and confidence that in turn translates to growth, productivity and security.

To a pessimist, these outcomes may appear as lofty ideals that are beyond the boundaries of earthly realities. Achieving these ideals will require institutions and organizations that promote justice, efficiency, stability and security.

Political leadership will be critical in the transition. The Bangsamoro will require the sort of leaders who have the courage and the integrity to inspire others toward a shared vision. The leaders of the Moro Islamic Liberation Front possess these qualities. Let’s give them a chance to lead and together prosper in their success.

(Ever J. Abasolo, who holds BS and MS Economics degrees from the University of the Philippines and the University of Southeastern Philippines, respectively, is a methodology specialist of International Alert UK Philippines Programme. His recent work includes the development of an aggregation technique called the Violence Intensity Index that helps improve targeting and programming development and peace-building inputs in the Bangsamoro.)