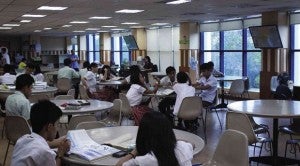 Public libraries are open places where the community can bask in reading and learning. They are spaces where people, regardless of age, gender, religion, race, nationality or social status can have equal access. In this age of new technologies, libraries are still essential in promoting culture, information, literacy and education.

The challenge for public city libraries is to evolve and adapt to changing demands amid the rise of e-reading devices, like tablets and smartphones, that fuels fears of a “bookless” society.

In the United States, for instance, 56 percent of device owners read an e-book on any day while 45 percent of the general public readers read a book in other formats. With electronic reading devices becoming cheaper, a growing number of Filipinos are also into e-reading.

It comes as a surprise that a number of public libraries in the Philippines are surviving.

The top three libraries that won in the 2008 Search for Outstanding City Library in Metro Manila continue to thrive and reach out to their communities.

The Pasig, Quezon City and Marikina libraries  are known for their facilities, extensive collections and engaging activities for anyone who wishes to learn.

Place of discovery in Pasig

The Pasig City Library is known for its unique activities and its Science Discovery Centrum. Visitors can have a first-hand experience of science and technology innovations, and wonders.

The library is a go-to place for students, who make up the majority of its visitors.

Head librarian Theresita Osorio says it is during exam week that students heavily use the library. These would be in September, October, February and March. Elementary students would also wait in the library for their guardians to fetch them after class.

“I enjoy going to the library because I can watch puppetry and attend storytelling sessions. There are many beautiful books. And it is also here where my mother fetches me,” says Marco Cruz, 9, an incoming fourth-grade student of Pasig Elementary School.

Some users, often residents, go to the library for the wide collection of fiction and Filipiniana books. As of this year, the library has more than 100,000 books that users may borrow and take home.

Children can enjoy puppetry, daily storytelling and film showing in the children’s section, which has a collection of toys and a small amphitheater exhibiting visual and educational materials.

For academic research, students can check the high school and college sections for a more specific collection of books, like literature, history and social sciences. Computer and Internet service is available for a small fee.

Educational tours are held at the Science Discovery Centrum for P30 each for Pasig City residents and P50 for nonresidents. Students and visitors can enjoy a multitude of science exhibits, such as the electrostatic sphere, thunderstorm simulator, wiggly wire apparatus and coin funnels.

The centrum displays informative art installations about the solar system, famous scientists and the environment. Perhaps the most exciting part of the educational tour is the wide array of interactive optical illusions.

“The Discovery Centrum is beautiful! The inventions exhibited there are very interactive. I learned a lot when I visited it. Super cool!” says incoming sixth grader Uyle Sanchez, 11, also a student of Pasig Elementary School.

Nonresidents are welcome to visit and use the library, provided that they present a valid ID.

For those who cannot go to the library, there is the mobile library program.

The library and its activities are closely monitored by 35 librarians to ensure that the mission of helping users discover old and new things the fun way is guaranteed.

Since May 2010, it has served residents of the city’s 30 barangays (villages). It is a well-funded library for a city with a P7-billion income in 2013. Being under the social services, the library was given P10.64 million last year. Osorio says the local government unit is the only source of funding for the library’s development.

“We are asked to submit our requirements, need for furniture, equipment, books, everything,” says Osorio.

The Quezon City Public Library consists of its main building and 20 branches. The main headquarters has 15,162 books, with applied science books as the most borrowed.

One can borrow up to eight books. The most visited are the reference, periodicals, Filipiniana, children’s and law sections.

Its facilities include a database that allows it to connect with other city libraries that do not have regular book updates, printing services for their users, a Wi-Fi system and a coffee shop. A state-of-the-art library building in Quezon City Circle for its 75th Foundation Day is in the works.

“What I like most among its facilities is the Wi-Fi. I use it for research for my work,” says Joel, 21, who is employed in an electrical company.

For benchmarking, the staff of the Quezon City Library travels abroad to such places as Hong Kong, Malaysia and Indonesia every year, says librarian Mary Ann Bernal.

It has reached out to the community through activities, such as storytelling and puppet shows for children, a tutorial class on library work for seniors and out-of-school youth, a mobile book drive and an “Adopt-a-Library” program. Its staff also visits schools to invite more users and conducts a yearly update on its book collections. In addition, the library has day-care teachers.

As the “Student Volunteerism Library,” it first taps different universities, such as UP Diliman, when it comes to integrating their programs with the curriculum of Civic Welfare Training Service subjects. The Quezon City Library also produces graduates from its own educational system.

The main library attracts some 80 visitors daily, consisting of college students, professionals, especially those who use the law section for reviewing for the bar exams, and employees of the City Hall. In District 3, various activities include a storytelling caravan, puppet shows and film showing.

There is even a PWD (persons with disability) corner, including materials in Braille. At the barangay level, values formation classes are held.  There is also the Adopt-a-Library program, which aims to organize libraries in different provinces.

Reaching out in Marikina

The Marikina City Library’s ramp for differently-abled persons is part of its efforts to reach out to everyone.

Every month, it gets an average of about 1,400 visitors, mostly college students.

Frequently accessed sections are the periodicals, recreational, and general collection, but the reading list is not limited to these materials.

The library houses 13,296 books, with the general collection accounting for the biggest number at 4,300. The reference and law section follows with 4,078 books. The Filipiniana section has 3,120 books and the children’s section, 2,658. There are also the fiction and textbook sections.

“The resources that I need, I can borrow here. I read these at the library and at home. But there are so many distractions at home, like the temptation to watch TV or play basketball,” says Bryan Pekas, 25, a law student from Polytechnic University of the Philippines.

The Marikina library is noted for its accommodating librarians. “The people here are pleasant,” says Joey Pangan, 57, who works in the construction business. “They entertain you, even if you’re not from Marikina.” Among the libraries he has visited, he finds the Marikina library clean.

There are other amenities for library users—free use of computers, Wi-Fi and billboards and audiovisual presentations, some of which, if not most, are created by head librarian Jason Cruz himself.

What sets this library apart is its efforts to rebrand itself and reach an even bigger audience. It recognizes the importance of one’s roots and shows this by creating a venue where people can search for their ancestors through an extensive database on family trees.

This regard for history and those who have been part of it is further manifested in the library’s home-bound book delivery system for the elderly and differently-abled persons.

Computer classes, which are open to all but are taken by mostly college and high school students, are also being held to teach and fortify knowledge that can be accumulated through technology.

The library also envisions a more holistic way of reaching out to different audiences. Cruz plans to have a music room for those who study better with music.

There is a plan to create a play area with a stage and microphone for kids to help them develop confidence at an early age.

A place that treasures its past and fortifies its present, the Marikina library strives to enrich its future by reaching out to every sector of the community so that together, they may uphold and fulfill their current slogan: to discover, explore and learn.

Making the libraries of Pasig, Marikina and Quezon City relevant and useful to the general public would not have been possible without political decisions.

Because these are public institutions, the way that they are developed is dependent on the decisions of the government official overseeing the city (in this case, the mayor).

With proper budget allocation and support, other city libraries would be able to reach the status of these three libraries. The libraries of Pasig, Marikina and Quezon City are more than repositories of books, as they have become places to engage curious and learning minds.

By looking into other ways by which learning and the sense of community can come together, the libraries have been able to change the perception that they are boring places.

People making use of the facilities and technologies can contribute to the public city libraries’ vision and function of promoting culture, information, literacy and education.

The average score of six indicators give a perfect score of 1 out of 4.

Below are the results of the 15 libraries ranked in order of their accessibility score: