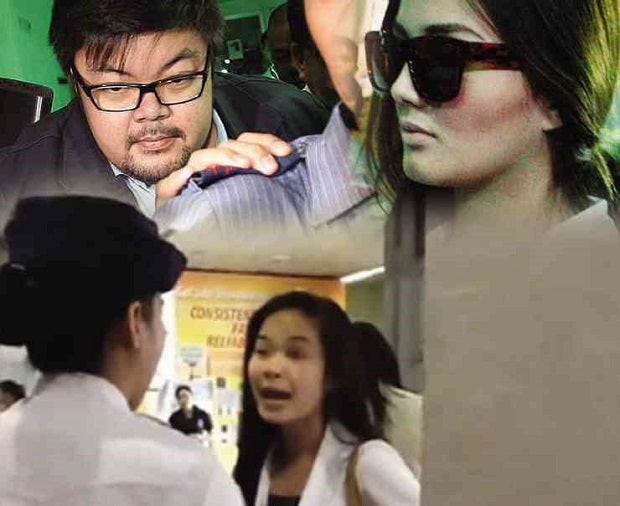 ACCIDENTAL PUBLIC FIGURES (Clockwise) Robert Carabuena, Deniece Cornejo and Paula Salvosa shot to fame in a matter of days or mere hours because of the “going viral” phenomenon.

The rape case filed by Deniece Cornejo against actor Vhong Navarro elicited negative reactions from numerous netizens who posted blogs and comments with nasty remarks, like “Deniece is a prostitute,” “She’s delusional!” and “Deniece had plastic surgery.”

Can Deniece sue the authors of these statements for libel?

Disini v. Secretary of Justice upheld the constitutionality of libel in the Cybercrime Prevention Act and reiterated its elements: (1) alleging a discreditable act or condition concerning another; (2) publishing such allegation; (3) identifying the person being defamed; and (4) having malice.

Of these four, the tricky element is malice. The burden of proving or disproving malice shifts based on the complainant’s identity.

A “private person” suing for libel has the benefit of “presumed malice” or “malice in law.” The existence of malice is presumed and the defendant has the burden of proving that there was no malice when the statement was made.

A complainant, who is a “public figure,” has the burden of proving that the accused had “actual malice” when the libelous statement was made. Even if the statement turns out to be false, the accused cannot be convicted of libel unless the complainant proves it was written with actual malice.

Based on Disini, “actual malice” or “malice in fact” exists when the libelous statement is made with the knowledge that it is false or with reckless disregard of its falsity or truth. Reckless disregard is a high degree of awareness of probable falsity.

Gross or even extreme negligence is not sufficient to establish actual malice.

In New York Times v. Sullivan, no less than US Supreme Court Justice Hugo Black acknowledged that malice was “an elusive, abstract concept, hard to prove and hard to disprove.”

The Supreme Court explained in Disini that imposing the “actual malice test” on public figures was justified because the Revised Penal Code and the cybercrime law “mainly target libel against private persons” and “[s]ociety’s interest and the maintenance of good government demand a full discussion of public affairs.”

However, “public figure” is defined broadly. In Guingguing v. Court of Appeals, a public figure is one who has pervasive fame or notoriety in the community, or has thrust himself into some particular controversy in order to influence its resolution.

In Ayer Productions Pty. Ltd. v. Capulong, a public figure is someone “who, by his accomplishments, fame, or mode of living, or by adopting a profession or calling which gives the public a legitimate interest in his doings, his affairs and his character, has become a ‘public personage.’ It includes anyone who has arrived at a position where public attention is focused upon him as a person.”

In traditional media, the complainant is either famous or unknown at the time the libelous statement was published. In social media, unknown persons can shoot to fame in a matter of days or mere hours because of the “trending” and “going viral” phenomena.

It becomes problematic when fame is attained as a byproduct of acts, which trigger massive online bashing and criticism.

Negative public reaction may cause initially unknown subjects to “trend” or to go “viral” on the Internet, thrusting them to fame or notoriety.

The bashing simultaneously triggers the libelous statements as well as the online activity or public attention sufficient to make the victims famous.

As a result, online libel victims, who were initially “private persons,” may suddenly find themselves “accidental public figures.”

Deniece Cornejo, formerly anonymous, practically became a household name thanks in large part to the reaction generated in social media (which currently includes a Facebook page devoted to bashing her).

Should Deniece count as a “public figure” if she files libel cases against her Internet bashers?

The question of “who are considered public figures” is more contentious when we consider experiences of other private persons.

Paula Salvosa (a noncelebrity female) was filmed berating an LRT security guard as she repeatedly yelled “I’m a liar?” causing the hashtag #Amalayer to trend in social media.

After being pulled over for a traffic violation, Robert Carabuena (a noncelebrity male) was filmed scolding and slapping a Metropolitan Manila Development Authority aide.

Both videos went viral and sparked public outrage, with numerous netizens hurling potentially libelous remarks against Salvosa and Carabuena, such as “Amalayer is a classic social climber craving public attention.” “Carabuena should go to jail because he acts like a pig.”

Facebook pages were also created to bash or ridicule Salvosa and Carabuena.

Salvosa and Carabuena were unknown until they committed acts that simultaneously subjected them to public ridicule and propelled them to fame or notoriety. Is it fair to impose on these accidental public figures the stricter actual malice test if they sue for libel?

In Guingguing, the Supreme Court (citing Curtis Publishing Co. v. Butts) explained why the actual malice test extended to public figures: “‘[P]ublic figures’ have as ready access as ‘public officials’ to mass media of communication, both to influence policy and to counter criticism of their views and activities.

“Our citizenry has a legitimate and substantial interest in the conduct of such persons, and freedom of the press to engage in uninhibited debate about their involvement in public issues and events is as crucial as it is in the case of ‘public officials.’”

While the reasoning in Guingguing may be applicable to “traditional public figures” (such as actors, famous athletes and news anchors), accidental public figures do not appear to be on the same plane. For instance, they do not have ready access to mass media to influence policy and counter criticism.

Neither do they engage in professions or lifestyles that would give them the expectation that the public has a legitimate and substantial interest in their conduct.

In a TV interview, Salvosa professed that, at some point, she was afraid to go outside and that she wanted to change her name.

The Supreme Court in Disini recognized the destructive effects of online libel, stating: “[l]ibel in the cyberspace can of course stain a person’s image with just one click of the mouse.

Scurrilous statements can spread and travel fast across the globe like bad news. Moreover, cyberlibel often goes hand in hand with cyberbullying that oppresses the victim, his relatives, and friends, evoking from mild to disastrous reactions.”

Incidentally, Salvosa and Carabuena have also claimed to be victims of cyberbullying.

Perhaps, legislators should carve out an exception for “public figures ex-post” or accidental public figures—those who achieve fame or notoriety by virtue of acts which subject them to attention, ridicule, bashing, or worse, online bullying.

Several considerations may justify an exception. One, the application of the actual malice test affects the ability of a libel victim to win a case.

Currently, only the Anti-Bullying Act of 2013 has a provision on “cyberbullying” but this strictly applies to bullying among students.

(Karen Jimeno is a junior partner at Jimeno Cope & David Law Firm and a law professor in various law schools. She is also a TV host for “LegalHD” on Solar News Channel and a legal adviser on TV5’s “Face the People.” She graduated from the UP College of Law and Harvard Law School and is licensed to practice law in the Philippines and in New York.)