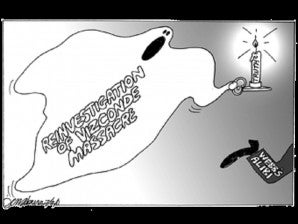 DURING THE nine years that it was in power, the Arroyo administration “ran the PCSO to the ground,” saddling the agency with P4 billion in debt and a pile of questionable contracts with various “media” (more like PR) groups, suppliers and hospitals, according to Philippine Charity Sweepstakes Office Chair Margarita Juico. The trick was done by “commingling” the agency’s funds for operational expenses with those intended for charity work—a blatant violation of PCSO rules—a practice that was questioned by the Commission on Audit in its 2008 and 2009 reports. The culprits in this juggling act? President Gloria Macapagal-Arroyo’s appointed directors to the PCSO board.

The spurious media contracts alone amounted to P1 billion, apparently given to favored PR hacks who cornered the lucrative business of PCSO advertising placements on radio programs, newspapers or TV shows. Not only were the ad placements overpriced, they were also a source of hefty kickbacks—ranging from 40 to 50 percent of the budget, according to Juico.

It was a sophisticated operation. The media personalities themselves reportedly put up their own ad agencies to facilitate their commissions. And they managed to deploy the kind of excessive, over-the-top advertising—sometimes over 20 spots per day on the same TV or radio station—that sounds almost Orwellian, except you knew these ads were aired ad infinitum not so much to brainwash people’s minds about the PCSO as to line the greasy pockets of their creators and facilitators.

From only P319 million in 2001, the PCSO’s ad budget ballooned to P1.7 billion by 2010. In 2008, the COA noted, in dry but pointed language, how the nearly P529.45 million the agency had paid for advertisements were not only exorbitant, but had also become, in effect, misappropriated funds. “Considering PCSO’s mandate to raise funds for health and charity programs, instead of spending on advertising expenses, a portion could have been used more meaningfully for charity.”

It was a different sort of charity the PCSO lavished on film director Carlo Caparas, who snared a deal quite unheard of even in an age when politics and show business have virtually dissolved into each other. Philippine cinema’s purveyor of “massacre movies” and Arroyo’s idea of a National Artist for Film and Visual Arts is, according to his contract with PCSO, bound to receive P1.5 billion over five years, ostensibly to produce TV programs that extolled the PCSO, its beneficiaries and the lucky winners of its lotto and sweepstakes games. Propaganda can be expensive—bad propaganda even more so.

Media and show-biz weren’t the only institutions conscripted to the long-term, damn-the-rules campaign to keep the Arroyo administration afloat. The Catholic Church, too, has much to explain, if reports are to be believed about massive infusions of PCSO cash into church organizations and parishes, and gifts of Mitsubishi Pajeros to certain bishops allied with Arroyo. And not just Pajeros, according to “running priest” Fr. Robert Reyes. Arroyo “constructed houses (for priests), convents, cathedrals.”

PCSO  documents reveal that seven bishops or their dioceses received SUVs with Arroyo’s blessing, among them Bishop Juan de Dios Pueblos of Butuan, who bested his colleagues by snagging two of the vehicles. Pueblos is the same prince of the church who caused an uproar last month by calling for President Aquino’s ouster, saying he was “not really worthy to be a president. That job is not for him. The earlier he will be out of his post, the better for the Philippines.”

To paraphrase Thomas More: “Why, Your Excellency, it profits a man nothing to give his soul for the whole world … but for a Pajero?”

The therapeutic “housecleaning” happening at the PCSO shouldn’t stop at that agency. The Philippine Amusement and Gaming Corp. is another government office ripe for turning over, its transactions exposed to the light of public scrutiny. The latest to report suspicious transactions in its records under the previous watch is the Technical Education and Skills Development Authority. Not even the state agency mandated to help the poorest of poor Filipinos gain livelihood skills escaped plunder, it seems.

These agencies’ books should be turned inside out, and the people who defiled them should be charged in court—pronto.