Defense Secretary Voltaire Gazmin and the Armed Forces of the Philippines top brass displayed impressive resolve in ridding the military of graft and corruption when they testified before the Senate blue ribbon committee last week. “The DND and the AFP—they will be properly managed,” Gazmin vowed. “I am aware of the struggles of my fellow soldiers. I am resolute to look after their welfare.” 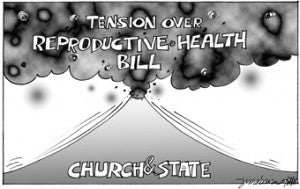 But even as the defense establishment and AFP top brass were making the assurances, an audit report showed that the AFP has P19 billion in unliquidated cash advances. Still, if only because Gazmin and AFP Chief of Staff Ricardo Oban Jr. have shown in the past not only an openness but also a quiet resolve to reform the military, their pledge bears watching. Gazmin, for example, is seeking the participation of civil society in bidding procedures through a memorandum of agreement between the DND and the Catholic Bishops’ Conference of the Philippines and the Makati Business Club. ‘’The DND, in line with the direction of President Aquino, is devoted to walk the path of reforms and change. We shall tread this avenue of uprightness towards overall transformation of systems, military culture, norms, behavior and attitudes,” he said.

The AFP has been in “agony” over the results of a survey naming it as the most corrupt government agency amidst allegations of widespread corruption. At the center of the graft scandal are Carlos F. Garcia and Jacinto Ligot, both former AFP comptrollers, who are facing criminal charges. Also linked to the scandal are former AFP Chiefs of Staff Diomedio Villanueva, Roy Cimatu and Efren Abu.

The new resolve to reform the military comes as a breath of fresh air. Finally it seems that defense and military officials are taking such findings seriously, not cavalierly dismissing them, as was the wont of the top brass in the past. It can be said that the past has finally caught up with the AFP. All those years of setting aside offhand the glaring public perception of it as corrupt and mismanaged—a perception borne by repeated exposés or widespread charges delivered through the press—have come back with a vengeance: The AFP has been weighed and found severely wanting.

To some extent, the AFP is now at a crossroads. A reform of the military along the lines that are emerging now—to make it accountable for the billions of pesos that have regularly gone to supporting it but without evident results, much less proper liquidation—would have been inconceivable 15 years ago when Fidel Ramos, a former AFP chief of staff, was president, and military men, retired or those associated with putsches against President Corazon Aquino, were running in national or local elections. Last year, several of the latter, in fact, ran for public office, but the results were extremely mixed. Moreover, many of the candidates ran on the platform of reforming the military and ridding it of its old vices which, presumably, the candidates had shielded themselves against when they were in the active service.

The reform of the Philippine military is not happening without an international context. Since the start of the new decade, Arab countries have been experiencing a pro-democracy wave that the Philippines went through a generation ago. The trend involves the toppling of despots whose corruption and hold on office are widely believed by an increasingly enraged and politically active population as having been perpetuated through military bossism. Although the Arab military, as in the Philippines in 1986 and 2001, has been both a problem and a solution to the democratic confrontation, its position in the democratic transition obtaining now would expectedly be problematic, as the AFP’s. Increasingly, the Arab military has been made to account for the depredations of the past. In the case of Turkey, Islamic like the Arab countries, its military that has seen itself as a protector of the secular order has come under increasing attack for its abuses, especially the coup of 1981. Worldwide, the military is on the defensive as a result of the pro-democracy wave. In the Philippines, the military is on the defensive as it reassesses its role in deepening the roots of democracy through public transparency and accountability.