IN THE two resolutions on the Carlos Garcia plea bargain agreement that the Sandiganbayan issued on May 9, the anti-graft court’s Second Division equated the interest of the government with the recovery of property. In other words, it understood the legal issue in terms of money. Justice, which the judges conflated with the need to protect the government’s interest in the case, meant getting Garcia, the military comptroller who earned a mere five-figure monthly salary, to part with some of his unexplained wealth. 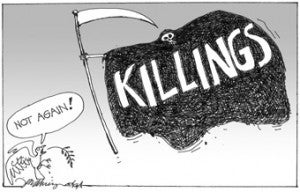 Assuming for the moment that the Second Division is right, the inevitable next question is: Why settle only for P135 million? The amount is not even half of the P303 million Garcia was found to have owned, when the authorities finally caught up with him. In what way is forfeiting less than 45 percent of a military officer’s unexplained wealth in the country’s best interests—especially when evidence found by the Anti Money Laundering Council, ignored by the Office of the Ombudsman but aired during a Senate blue ribbon committee hearing, suggests that Garcia’s wealth at one time may have even topped P700 million?

On its own terms, then, the Second Division must be judged to have fallen far short of its own mediocre objectives. Its green-lighting of a plea bargain in which the official with unexplained wealth was allowed to keep 55 percent of the amount discovered is tantamount to an act of surrender. As former Supreme Court Chief Justice Art Panganiban pointed out in his column on Sunday, if Garcia’s counsel thought the evidence against his client was in fact weak, as the Second Division asserted, then he would have filed a demurrer to the evidence.

FEATURED STORIES
OPINION
Naia: No Jewel, but a diamond in the rough
OPINION
Tears on Bonifacio Day
OPINION
How did Marcos Jr. win?

But is the central legal issue in the Garcia case only about money? That is a narrow view of the responsibilities that the people entrust to the Office of the Ombudsman which prosecutes graft and corruption cases and to the Sandiganbayan which hears them. (In fact, the very plea bargain—essentially a deal with an official caught red-handed—was one reason why an overwhelming majority of congressmen voted to impeach Merceditas Gutierrez.) Forfeiting illegal wealth in favor of the government is an important task, but it isn’t the only or even the principal demand in any graft and corruption case.

The central issue must be to do justice, as the people define it and as the agencies of government are duty-bound to understand it: punishing the corrupt, stopping the scourge of corruption. Stopping at a money settlement, stopping short of what the law itself demands, fails to meet that issue head-on.

To be completely fair, the longer of the two resolutions, the one written by Justice Samuel Martires which dismissed the Motion to Intervene filed by the Office of the Solicitor General, discussed the attendant legal issues in great depth. But many of the nuances that Martires took pains to make were in fact interpretations, and could just have as easily been interpreted in another way. (For instance, his notion that the Ombudsman represented the aggrieved party without whose consent any plea bargain agreement would be void.)

There is no question about the end result, however. The resolution effectively enables corruption, in the military as well as in government in general, to continue.

It shows us that even undisputed proof of direct bribery can be nuanced away—though the judges themselves may confess to sharing the public’s amazement over the Garcia family’s great and unexplained wealth.

It shows us that tragic shortcomings in the prosecution’s search for evidence can be excused—though the Office of the Ombudsman was demonstrably remiss in its duties.

It shows us that government officials can continue to keep much of their unexplained wealth, wealth generated during their government service—even though they failed to follow the law and explain the true sources of their income.

Not least, it shows us that justice understood only in terms of money is not justice at all, but a reward for corruption.