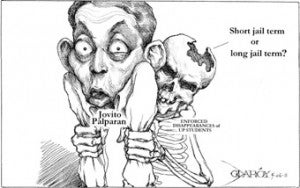 ASIDE FROM the four dead and one wounded already reported, there was another casualty in the US raid on Osama bin Laden’s compound in Abbottabad, Pakistan early this week: the credibility of the Pakistani military. Given all the details of the location and size of the compound, and the unusual conduct of the compound’s residents, it is difficult to imagine that the highly trained army of a nuclear power could have missed telltale clues in the five or six years Bin Laden was said to have resided in the compound—especially as that army was supposed to be in active pursuit of the notorious al-Qaida founder in the first place.

The official White House account of the raid has been partially changed at least twice, and official or officially sourced descriptions of the compound as a mansion or a luxury residence (something the available pictures give the lie to) continue to alienate observant news consumers. But there is no need to rely on White House sources as far as the fact of the compound itself is concerned; we can check it for ourselves, by looking at Google Maps, or using the many interactive graphics now available on news websites. The compound is only several hundred meters away from a Pakistani military academy; it stands out in its immediate area, for its high security perimeter and third-floor privacy wall; it was especially conspicuous when it was being built, a few years ago, when there were fewer houses in the area. It strains credulity to assert, as various Pakistani officials have done, that the compound did not arouse suspicions.

“It needs to be appreciated that many houses have high boundary walls, in line with their culture of privacy and security,” a Pakistani government statement read. “Houses with such layout and structural details are not a rarity.”

But as news reporters were able to confirm only a day after the early morning raid, the conduct of the compound’s residents was also suspicious. They hardly went out, the many children inside did not go to school, they did not let any visitors in. US officials say the compound aroused their suspicions also because it did not have a telephone or an Internet connection, and because the residents took the unusual precaution of burning their trash. It was the conduct, in other words, of people with something to hide. As an Abbottabad resident put it, “People were sceptical in this neighborhood about this place and these guys. They used to gossip, say they were smugglers or drug dealers.” Exactly. But apparently, Pakistan’s prestigious military doesn’t engage in gossip, or listen to it.

The town itself, even though heavily populated by military men or retired personnel, is no stranger to top terrorists. Before his arrest elsewhere in Pakistan, top al-Qaida deputy Abu Faraj al-Libi used to live there. And only last January, top Indonesian terrorist Umar Patek and his Filipina wife were arrested in the town. (The news broke only in March, when the Associated Press heard of the arrest and wrote about it.) In other words, a government intent on pursuing the world’s most wanted man would have had ample reason to keep a close, even intense watch on Abbottabad.

We realize that, for Islamabad, the entire Osama bin Laden question is vexing and complicated. Ever since then-President Pervez Musharraf said offhandedly in 2002 that Bin Laden was either undergoing dialysis in Saudi Arabia or already dead, there has always been an ambivalence in official Pakistani attitude about Bin Laden’s ultimate fate. It is true that Pakistan has many other interests than merely playing terrorist cop, including the stability of its Afghan neighbor.

But apparently, according to Pakistani Prime Minister Yousuf Raza Gilani, it is the world’s fault that Bin Laden had gone undetected for so long. “Certainly, this is intelligence failure of the whole world, not Pakistan alone,” he told the media in France the other day.

That idea is an even more difficult sell. From what we can see, the best that can be said is that Bin Laden was either hiding or being hidden, and Pakistan was either incompetent or complicit.