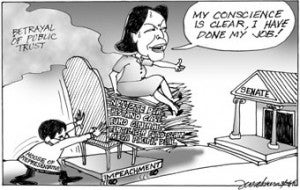 THE FINAL result—212 votes in favor of impeachment, 46 votes against, with 4 abstentions—was both unexpected and overwhelming. In impeaching Ombudsman Merceditas Gutierrez, enough congressmen crossed party lines to send an unmistakable message: the case against Gutierrez now submitted to the Senate was not merely that of the now ascendant Liberal Party or of the new administration coalition, but that of Congress itself.

And because a great many of the members of the House of Representatives were elected to office last year on the strength of voter outrage over the corruption scandals that marked the Arroyo presidency, the overwhelming vote meant many congressmen were acting as true representatives. They were implementing the will of an outraged and long-suffering people.

The outcome took the minority by surprise; someone close to Gloria Macapagal-Arroyo said the minority had been counting on at least a hundred no votes. The minority’s double standard in dealing with the issue of “rumors” may be proof of this misplaced confidence. A thundering Edcel Lagman asked the House to track the source of the text message allegedly attributed to the Liberal Party’s Joseph Abaya, which threatened those who would vote against impeachment with “zero” pork barrel. In truth, the message, with its obvious purpose and amateurish execution, could have been manufactured by anyone. But in their exaggerated sense of concern over the text message, the minority congressmen ignored an even more damning piece of information: Niel Tupas Jr., the chairman of the justice committee, had given interviews in which he said a high-ranking official of the politically influential Iglesia ni Cristo was making the rounds to scuttle the impeachment. If true, that would have made Lagman and his allies party to or the beneficiary of unconscionable lobbying—and yet the minority did not press for an investigation. Perhaps Lagman et al. thought the lobbying was going to bear fruit.

They were terribly mistaken. As even the wire agencies reported, Arroyo left the session hall looking dejected. Given the details of the vote, as we know them now, that is not surprising. Some of the officials most closely identified with her when she was president, such as Sergio Apostol, Arthur Defensor Jr., Ben Evardone, Pedro Romualdo and Luis Villafuerte, voted to impeach Gutierrez.

Even the relatives of sitting senators she may have expected to take a neutral stance, either out of delicadeza or in an attempt to claim the mantle of objectivity for their kin, voted for impeachment. The list includes Juan Edgardo Angara, Salvador Escudero III, Juan Ponce Enrile Jr., Jose Zubiri III—and, belatedly, JV Ejercito, who changed his no vote to yes after seeing history’s tide pass him by. The one representative related to an incumbent senator whom Arroyo would have expected to vote against impeachment, Lani Mercado, the wife of Sen. Bong Revilla, the president of the Lakas party, opted to abstain. (Mark Villar abstained too.)

Worse, Anna York Bondoc, one of Arroyo’s closest allies in previous congresses, figured in the short list of representatives who were recorded as present but did not vote.

In the end, Arroyo was left with a hard core of supporters, including the Garcia father and son from Cebu; former Cabinet members Rolando Andaya Jr., Simeon Datumanong and Arthur Yap; and three members of the Arroyo clan.

It is important to emphasize that four of those who voted against impeachment, namely Andaya, Rodolfo Antonino, Jesus Crispin Remulla and Arnulfo Fuentebella, who served as presiding officer during the extraordinary session, took part in the Sunday night caucus that Speaker Feliciano Belmonte called to ensure a quorum for the impeachment vote. As Majority Leader Neptali Gonzales II justifiably pointed out the following day, the vote of the four proved that Belmonte did not twist arms simply to win the vote.

To be sure, the overwhelming vote could not have been achieved without incurring costs. Political favors must have been promised or exchanged; that is the language of congressional initiative. We note that both President Aquino and Speaker Belmonte have pledged that, unlike in the Arroyo era, no one will be denied their share of the pork barrel, but then money is not the only currency. Campaign support for legislators who pushed the anti-corruption drive and heeded the people’s will, for instance, would be welcome, too.