When vanity comes before service 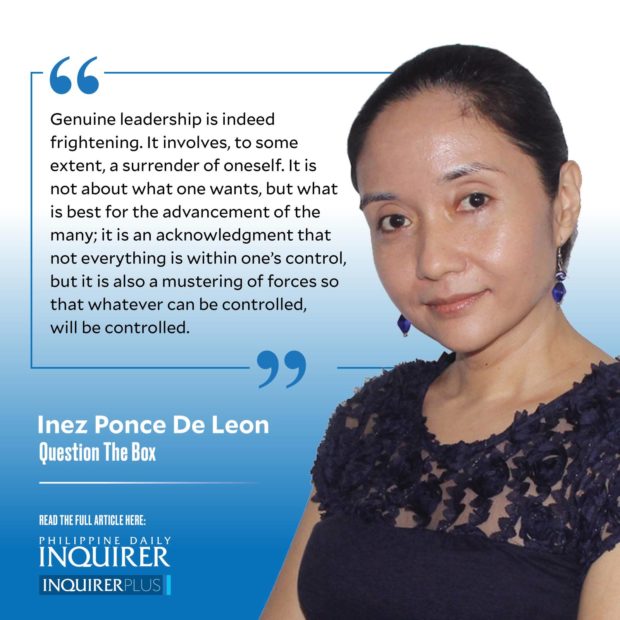 In the academe, the qualified professors of a department have to serve as chair for at least one term. A professor moves into the position; it is, quite literally, a musical chairs arrangement that nobody wants to “win” at.

It is not a promotion: there is no salary increase, only an exemption from teaching a certain number of classes.

New chairs are not greeted with “congratulations” but “condolences.” The position is demanding, a vocation, and a sacrifice. It requires knowledge of school policies, student welfare, facilities upkeep, faculty well-being—and that’s just the regular, day-to-day work. Chairs are still expected to teach and do research, even with limited capacity.

Academics wonder about people who aspire to be the chair of a department. Anyone who campaigns to be a department chair is either one of two things: incredibly naïve and therefore unfit for the position; or a control freak and excited to get their hands on some form of power.

Being the chair is not unlike any other position of leadership. It is dreaded because of the responsibility it entails, and the attention that it demands.

Genuine leadership is indeed frightening. It involves, to some extent, a surrender of oneself. It is not about what one wants, but what is best for the advancement of the many; it is an acknowledgment that not everything is within one’s control, but it is also a mustering of forces so that whatever can be controlled, will be controlled.

It is therefore a contradiction when anyone uses their position of leadership—especially when they are elected into it—as a way to clear their family’s name.

This reduces leadership to a shower, where one can wash off the grime of past misdeeds if one lathered and scrubbed hard enough. Or, to be more precise, it turns a position into a bucket of paint, all meant to whitewash a past with lies and false positivity until the dirty, unvarnished, painful truth is forgotten.

We should, therefore, ask: why would anyone need to be elected to any government post if only to clear their family’s name? Why couldn’t they have done it through their private sector dealings, in lower government positions, years, even decades ago? As the late senator Joker Arroyo once said: public service does not always have to mean public office.

Obviously, it is not only the clearing of the name that is so desired; perhaps it is the visibility, the chance to get one’s hands back into the money pits of power.

It is pathetic, as well, how some people unfit to even be leaders are considered influencers. The clearest example is Alex Gonzaga, who smeared a waitstaff’s face with frosting from her birthday cake. Her actions prompted social media outrage. In response, her rabid supporters began quoting Bible verses (e.g., John 7:8, “Let he who is without sin be the first to cast a stone”), imitating what Gonzaga often likes to do on her social media pages.

Quoting Bible verses is easy compared to actually living out one’s faith, i.e., not exploiting or humiliating people. The oft-used John 7:8 is also one of the most misused and misunderstood verses.

It does not imply that we should be free to sin because we can point out wrongdoing only if we are perfect. Rather, the verse admonishes the Pharisees for twisting the law: they presented only half of the guilty party in an adulterous relationship and had no eyewitnesses to the crime, as stipulated by the law of Moses.

The verse actually means: follow the entire law, not just the parts that suit your desire to prove someone wrong. In misrepresenting the law, you also sin.

Gonzaga influenced people to find excuses for her behavior. Had she truly apologized, shown that she understood the gravity of her misdeeds, and called upon people to untwist their logic, then she would have been a true leader rather than a loudmouth inciting people to stupidity.

All this stands in stark contrast to Jacinda Ardern, prime minister of New Zealand who, just last week, announced that she would not seek reelection. Her speech, in not so many words, was an homage to genuine leadership: a good leader must learn to step down when they don’t have enough energy to do their job justice.

It is humility—and it is a louder testament to the integrity of an actual leader worthy of emulation.