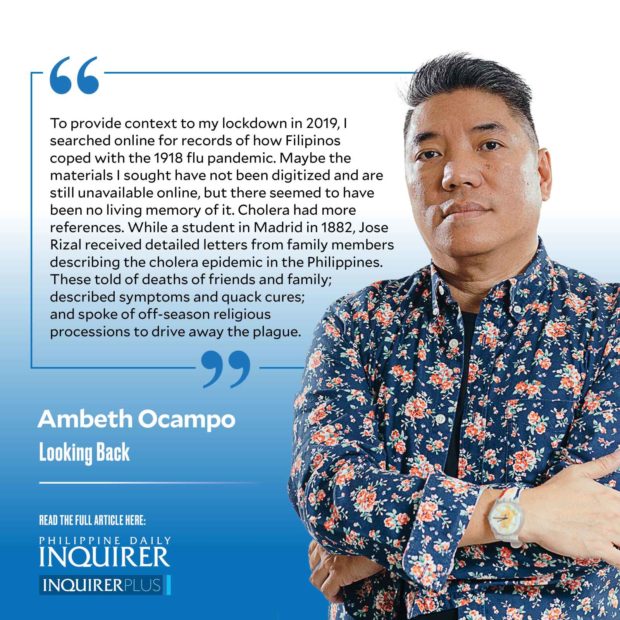 The 32nd-anniversary edition of my book “Rizal without the Overcoat” has two covers: both in striking red, identical except for the first run that has Rizal wearing a face mask, succeeding editions have him without a mask. More than creating a collector’s item, I wanted the book to remind people of the pandemic we endured. While we can now move about without the cursed face-shield, and opt to be mask-less outdoors, we must remember that COVID is still lurking in the shadows, mutating faster than we can develop vaccines and medicines. I often wonder how succeeding generations will look back on the COVID pandemic. It has been a mystery to me why I could not find much Philippine material on the 1918 flu pandemic that infected a third of the world’s population, killing an estimated 50 million worldwide. It was so devastating and yet nobody from my parents’ or grandparents’ generation remembered it the same way as they did the horrors of the Japanese occupation.

In the past, history was drawn primarily through the written word, and I remember the late nationalist historian Teodoro A. Agoncillo who always roared: “No document, no history!”

To provide context to my lockdown in 2019, I searched online for records of how Filipinos coped with the 1918 flu pandemic. Maybe the materials I sought have not been digitized and are still unavailable online, but there seemed to have been no living memory of it. Cholera had more references. While a student in Madrid in 1882, Jose Rizal received detailed letters from family members describing the cholera epidemic in the Philippines. These told of deaths of friends and family; described symptoms and quack cures; and spoke of off-season religious processions to drive away the plague.

In the early 20th century, I found references to drastic American quarantine and sanitation methods that led Filipinos to hide the sick and dead from authorities further spreading the disease. In the early days of COVID, hospital patients died without the comfort of family, their corpses cremated and buried, leaving the bereaved without a wake or funeral. This reminded me how Apolinario Mabini’s funeral in 1903 was exceptional because he was not cremated like other cholera victims. A huge crowd braved the disease to give him a proper send-off in the Chinese cemetery.

If I had a dearth of material on the 1918 flu pandemic, historians of the future will have an ocean of material on the COVID pandemic: online news and social media have taken care of that. One of the primary sources for the Philippines will be “Mikrobyong Maliit, Pandemyang Pasakit,” an essay in verse by Dr. Joseph Adrian L. Buensalido, illustrated by his better half, Dr. Jocel Soria Buensalido. They were frontliners in the war against an invisible, unknown enemy. Buensalido draws inspiration from Philippine history, particularly Jose Rizal, patriot and physician, whose life we are taught was a struggle not just against physical disease, but the more deadly diseases of the spirit, of morals, of what keeps Filipinos from finding themselves and becoming the best that they can be.

The Philippines is overcrowded by memorials: statues, monuments, sites, and shrines to our history and heroes. Many we see but seldom notice. Only a handful remind us of man’s unending struggle against disease. Paco Park today was the former Cementerio General de Dilao, established for the fatalities of the 1807 cholera epidemic. In front of the Manila Cathedral in Intramuros, a bronze statue of Carlos IV, erected in 1824 by the city and people of Manila in gratitude for the gift of smallpox vaccine brought by the Balmis Expedition that saved many lives. Balmis may not ring a bell, but he is commemorated in a historical marker at the Research Institute for Tropical Medicine in Alabang that sadly does not record the names of the 25 orphan boys that carried the vaccine in their bodies from Mexico to the Philippines. No record, too, of the three Filipino orphans who were human carriers of vaccine from Manila to Macau. Buensalido has stepped beyond telling us and a future generation what they went through, he has also left us with a memorial of those who, in Rizal’s words, fell without seeing the dawn. Theirs was a good fight, and they are remembered as modern-day heroes in the pages of this book.