The problem with eggs | Inquirer Opinion

The problem with eggs 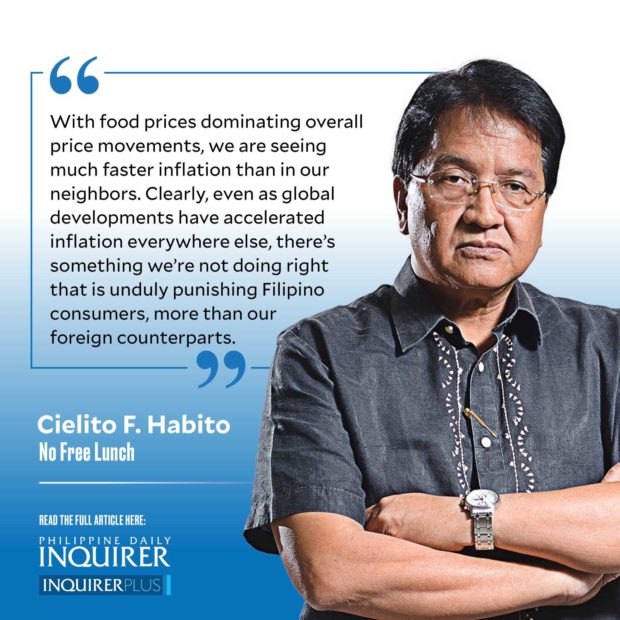 Eggs are the latest farm commodity to see significant price hikes, at a time when onions continue to be priced at scandalous levels that even exceed meat prices. Sugar prices remain at abnormally high levels, even as imports have already been approved to close the supply gap that caused the price spikes last year, and new production has been coming out of the sugar mills. Prices of pork and fish have also stayed well above normal levels that prevailed before African swine fever (ASF) decimated an estimated one-third of the country’s swine population and key fishing areas were closed to forestall depletion of fish stocks. None of these escalated food prices have stabilized and normalized. And the list of affected commodities just seems to keep growing.

With food prices dominating overall price movements, we are seeing much faster inflation than in our neighbors. We ended the year with an 8.1 percent inflation rate, with the last quarter averaging 7.9 percent. This is much faster than corresponding rates elsewhere in the region as reported on the Bangko Sentral ng Pilipinas website: Malaysia, 4 percent; Vietnam, 4.4 percent; South Korea, 5.2 percent; Indonesia, 5.5 percent; Thailand, 5.8 percent; Singapore, 6.7 percent; and China, 1.9 percent. Clearly, even as global developments have accelerated inflation everywhere else, there’s something we’re not doing right that is unduly punishing Filipino consumers, more than our foreign counterparts.

And so now it’s eggs. As of middle of last year, we bought our eggs for P160 per 30-piece tray for large-sized eggs, or P5.33 apiece. Last week, it was P220 per tray or P7.33 each, from P205 per tray or P6.83 each just before the holidays. It has jumped 37.5 percent since June, and 7.3 percent within the past month alone, nearly our overall inflation rate for the entire year. Annualized, that would be a 133 percent price increase!

What’s happening with eggs? I asked our usual source, Dr. Deo Alcantara, a veterinary doctor who is also an egg producer, and he attested that farmgate egg prices had indeed escalated faster through the holiday season. He kindly linked me to Dr. Jesus Medina who is president of the Batangas Egg Producers Association and member of the National Egg Board. Medina explained to me that while Avian influenza or bird flu has been a major cause, now especially in Central Luzon and further north, more factors have come into play. He shared with me the analysis of Dr. Antonio Bautista, still another vet in the egg business, who traces the price movements from three years ago, when ASF prompted swine raisers to shift to egg production.

At that time, hiked imports of parent breeder stocks due to the industry shift supposedly led to an oversupply of day-old chicks, which led to an egg glut by late 2021 from the sudden increase of the poultry layer population. This reportedly pushed many small and medium-sized farms to stop operations. But by middle of 2022, imports of parent stock breeders slowed due to bird flu outbreaks at the sources, especially Europe. Added to this were sudden increases in world prices of feed ingredients like corn and soybean meal prompted by the Russia-Ukraine conflict. Meanwhile, closure of limestone quarries by the Department of Environment and Natural Resources last year also pushed limestone prices to P6-P8 per kilo, from P2-P3 before. Alcantara explained that this is a vital input because it is the calcium source for the eggshell, and in his feed formulation, up to 10 percent or 100 kilos of limestone are needed per ton of feeds.

What can the government do? Bautista points to the need for measures that will lower prices of inputs like corn and soy, along with related feed ingredients like copra meal and rice bran (darak), the price of which has also skyrocketed for lack of supply, according to Medina. More basic is the need for reliable data on the supply-demand situation, also absent for onions and other crops now under pressure.

As the saying goes, we can’t manage what we can’t measure, and until the government gets the numbers right, we’d be groping in the dark, while the common Filipino keeps suffering from this very basic failure of governance.