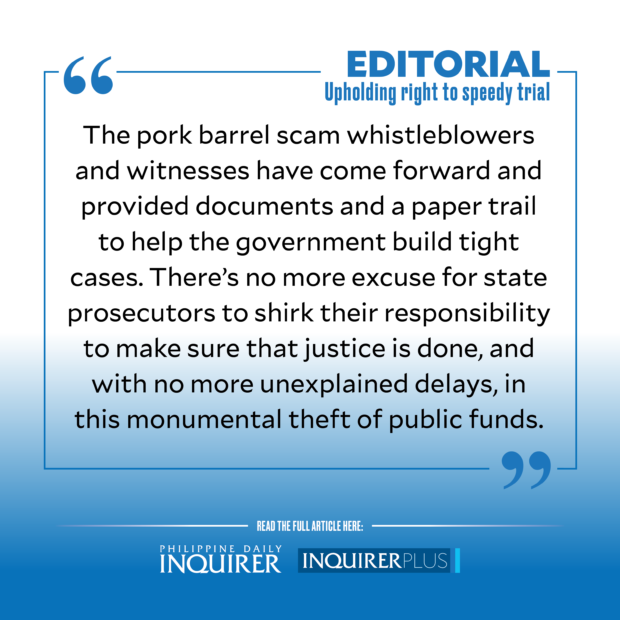 On Thursday night last week, Jessica Lucila “Gigi” Reyes, who was among those charged with plunder over the multibillion pork barrel scam in 2013, quietly walked out of the Taguig City jail, after securing a favorable ruling from the Supreme Court on her petition for habeas corpus.

The high court granted Reyes’ petition filed in 2021, saying that her continued detention for nearly nine years while her case dragged on, violated her constitutional right to a speedy trial. The court ruling noted that Reyes was able to prove that her detention, though in accordance with a commitment order from the Sandiganbayan handling the plunder and graft cases, involving the pork barrel scam, had become a “vexatious restraint,” and infringed on her right to liberty.

“Indeed, nine years is far too long of a detention pending the resolution of a criminal case. If petitioner were to wait for a final judgment before seeking effective relief, then it might be too late for her to genuinely enjoy her liberty. By then, justice delayed would truly be justice denied,” the Supreme Court said.

Who can fault Reyes for availing herself of all possible remedies, including temporary freedom? After all, three former senators also charged over the pork barrel scam led by businesswoman Janet Lim Napoles have been released on bail or acquitted. Former senate president Juan Ponce Enrile, Reyes’ longtime boss and her coaccused in the plunder case, is now serving as presidential legal adviser to President Marcos Jr., while Jinggoy Estrada has obtained bail and was reelected to the Senate. Sen. Ramon “Bong” Revilla Jr. was acquitted of graft charges in 2021 after the prosecution failed to prove his culpability.

When the Supreme Court ordered the release in 2015 of the then 91-year-old Enrile, not a few observers noted that Reyes, his longtime Senate chief of staff, was left holding the bag. Whistleblower Benhur Luy, Napoles’ bookkeeper, had identified Reyes as among Napoles’ main contracts in Enrile’s office. Socialite Ruby Tuason, who turned state witness, claimed she had delivered Enrile’s commissions to Reyes in her house or in restaurants, while she brought money in bags for Estrada in his Senate office. Enrile was accused of receiving over P172 million in kickbacks from Napoles, and of mishandling P345 million in pork barrel funds along with Reyes.

Reyes’ plunder case will continue, with the high court setting strict conditions compelling her to attend the Sandiganbayan hearings and report her whereabouts.

The high court’s decision was widely praised, for holding hope for those caught in the country’s notoriously slow and uneven justice system. Even Justice Secretary Jesus Crispin Remulla said it was possible for former senator Leila de Lima, who has been detained for six years on allegedly trumped-up drug charges by the Duterte administration, to benefit from this ruling.

The collective wish is that the sacred tenets in our laws—presumption of innocence, right to liberty, and speedy trial—would be available to all regardless of their station in life.

But the high court ruling also highlighted the spotty, if not sloppy, government prosecution of big cases involving graft and corruption, ill-gotten wealth, and even the brutal Duterte drug war.

In the Reyes case, the high court noted the “peculiar protracted proceedings” behind her continued detention. It said that while the delay was not entirely the fault of the prosecution, it failed to explain or justify these long-drawn-out proceedings. In her petition, Reyes said that her trial had been delayed due to the wrong markings on the prosecution’s evidence, which require the scheduling of more preliminary conferences.

Which begs the question as to why, nearly a decade since the P10-billion pork barrel scam was first exposed in this paper and cases filed subsequently, the trial for the main cases has been proceeding at a snail’s pace, with state prosecutors still at the stage of marking evidence in the Reyes plunder case. The convictions are few and far between, with only Napoles and a handful of her cohorts having been found guilty.

For sure, politically influential accused like Enrile and Estrada could do everything to delay the trial of their cases while they continue to enjoy their freedom. But it is precisely in these high-profile cases where state prosecutors need to be diligent and dogged in doing their job to avoid public perception that there are two standards of justice in this country—one for the rich and another for the poor.

The pork barrel scam whistleblowers and witnesses have come forward and provided documents and a paper trail to help the government build tight cases. There’s no more excuse for state prosecutors to shirk their responsibility to make sure that justice is done, and with no more unexplained delays, in this monumental theft of public funds.