Child victims of the drug war 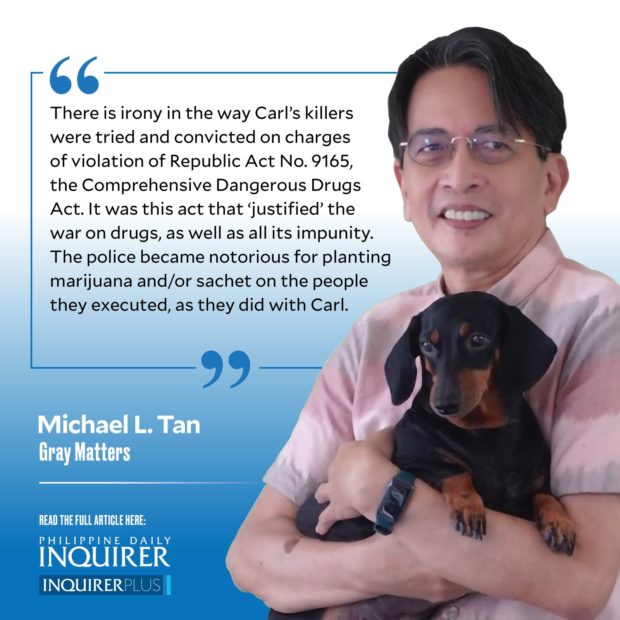 I wasn’t sure what to feel reading about the conviction of a policeman for torture and the planting of drugs in a case involving two teenagers, Carl Angelo Arnaiz and Reynaldo “Kulot” de Guzman, back in August 2017.

Jeffrey Perez and another policeman, Ricky Arquilita, were implicated in the murder of Arnaiz and De Guzman, but Arquilita died of a liver disease in 2019. Perez is still facing separate murder charges.

I am very familiar with the case of Arnaiz because he was a former student of University of the Philippines (UP) Diliman and, as chancellor of Diliman, I decided to drop in at his wake and extend condolences. I thought the visit would be short, but his mother asked me to stay, which I did for another two hours, listening to her stories about her son.

FEATURED STORIES
OPINION
ICC probe: Buckle up, we’re in for a long ride
OPINION
On Alex Gonzaga and the need to call out abominable behavior
OPINION
An education system in crisis: What is the way forward under a Marcos presidency?

Bright and a consistent honors student in public grade and high schools, he was one of the 83,000 who took the tough UP College Admissions Test in 2013. That year, only 3,800 students, including Arnaiz, made it into UP Diliman, the flagship campus, where he majored in interior design. His classmates told me he was bright and had high hopes of moving on to architecture.

The two cops first claimed that Arnaiz had been arrested for robbing a taxi driver, and killed when he resisted arrest and fired on the police. The forensic evidence, and a witness, disputed the cops’ accounts, a witness saying he saw Arnaiz kneeling in front of Perez pleading, “Susuko na ako (I’m going to surrender),” but was still shot thrice. The witness also said he saw the cops inserting bags into Arnaiz’s pockets. The bags, it turned out, had marijuana and “shabu.”

Arnaiz’s remains were found in a funeral parlor 11 days after he disappeared. Shortly after, Kulot’s corpse was found in a creek in Gapan, Nueva Ecija, with 25 stab wounds, and evidence of torture.

They killed children, too. Carl was 19 when he was killed, while Reynaldo was 14, and only two days earlier, there was another victim, 17-year-old Kian delos Santos. Public uproar forced the Duterte administration to scale down its bloody operations, but the killings continued.

So, while I’m happy we’re finally seeing movement in the trials of police accused of murder in the drug war—Kian’s cop murderers were convicted in 2018—I join other human rights advocates in hoping we will see more of the killers brought to justice.

Even then, we need to see more action to put a permanent stop to the drug war. All throughout Duterte’s term, local and international experts—including a former president of Columbia who had tried the drug war approach and seen it fail—have argued a “war on drugs” does nothing to stop drug use.

Moreover, the drug wars in the Philippines and overseas have mainly victimized the poor, while allowing big drug syndicates to become more powerful. Worst of all, the police’s bloodlust grew with each killing, driven by impunity, knowing they could get away with the most heinous of killings.

There is irony in the way Carl’s killers were tried and convicted on charges of violation of Republic Act No. 9165, the Comprehensive Dangerous Drugs Act. It was this act that “justified” the war on drugs, as well as all its impunity. The police became notorious for planting marijuana and/or sachet on the people they executed, as they did with Carl.

There’s much the nation owes to Kian, Carl, and Kulot, in a way martyrs whose deaths resulted in slowing down the blood and gore of the war on drugs.

But we continue to see vestiges of the war, and the possibility it will be intensified if the public is not vigilant. If there is “drug education” that’s needed, it should include reminding the nation of the thousands of victims, many innocent. I refer not just to those killed, but the thousands arrested and still languishing in our notoriously overcrowded jails, waiting for a proper trial that may never come.

Remember, too, Carl Arnaiz and what his life could have been like.