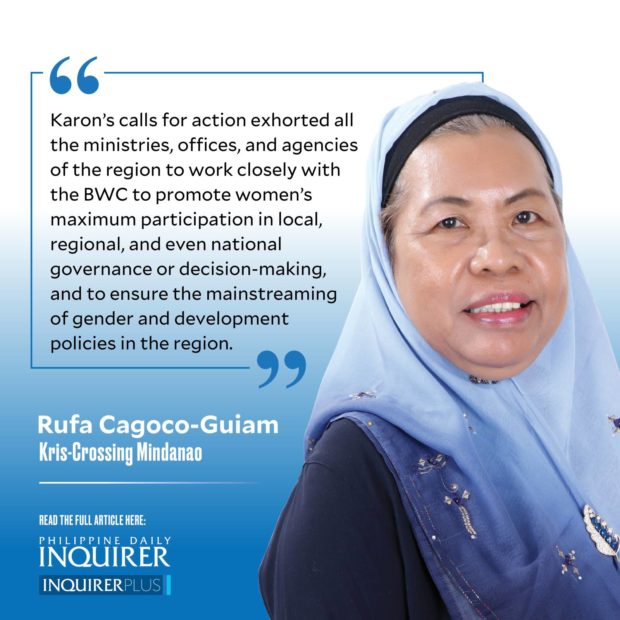 This year’s Sobwa was presented last Friday, Nov. 28, 2022, to kick off the 16-day annual campaign on ending violence against women and girls in the BARMM. This regional initiative is aligned with the United Nations initiative to eliminate violence against women and girls (UNITE). The international UNITE campaign started in 1991, after a group of women activists based at the Center for Women’s Global Leadership in Rutgers started an international institute for women’s leadership. In 2008, the United Nations joined this civil society-led initiative with their support through the office of the UN secretary general. Since then, the campaign annually runs from Nov. 25, the International Day for the Elimination Violence against Women, to Dec. 10, internationally celebrated as Human Rights Day.

In her Sobwa, Karon laid down eight calls for action to improve the state of Bangsamoro women (to include indigenous women in the region) in coping with various situations and circumstances that have resulted from long years of cyclical violent conflicts, as well as of natural disasters. Violent conflicts have been known to have caused massive displacement and destruction of lives and livelihoods of the communities in the region for more than four decades that continue to the present in a few “hotspots” in the region and its nearby areas.

In terms of climate change impacts, the region’s mainland province of Maguindanao was heavily ravaged by floodwaters that resulted from Severe Tropical Storm “Paeng” (international name: Nalgae) that hit the Philippines through the Visayas provinces last Oct. 25. The municipalities of Datu Odin Sinsuat, Datu Blah Sinsuat, and the city of Cotabato were among the most battered parts of the region.

Karon’s calls for action exhorted all the ministries, offices, and agencies of the region to work closely with the BWC to promote women’s maximum participation in local, regional, and even national governance or decision-making, and to ensure the mainstreaming of gender and development policies in the region. She stressed that BWC cannot do this alone. “We need the cooperation of all the ministries, offices of the regional government, all the local government units, and partners from the international donor community, civil society organizations and other nongovernment organizations.”

The BWC chair also cited various data on the milestones and other achievements of the commission as it collaborated with various ministries and agencies in the region, and noted how they have taken significant strides in mainstreaming gender and development in the region. She also noted that in the period of transition, BWC has “sustained efforts in empowering more community and grassroots women as leaders, mediators, and peace builders, and as part of the region’s early warning response mechanisms considering that the region is conflict-affected and a disaster-prone area.” Still, she thinks there remains a lot to be done to ensure a gender-fair and just autonomous region so that both women and men, and all other identities, are provided equal opportunities to work toward durable peace and security in it.

Three of Karon’s calls to action are of particular interest to me in my new research on understanding the intersections of climate change and gender inequalities. These are the following: 1) institutionalizing database management on sex, age, and disability-disaggregated data, including vulnerability data for programming and policy development; 2) strengthening coordination between and among ministries and offices in terms of prevention and response to gender-based violence, including access to sexual and reproductive health services, especially during complex emergencies; and 3) strengthening the implementation of the women, peace, and security agenda, especially its localization at the provincial and municipal levels.