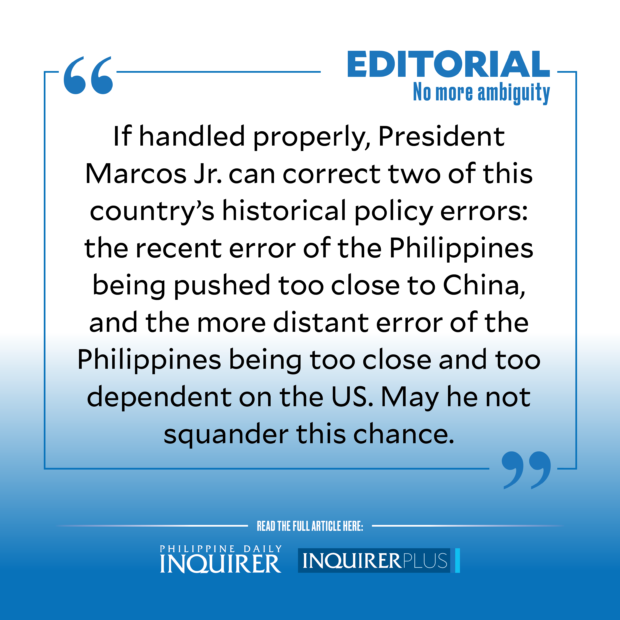 An armed attack on the Philippines’ armed forces, public vessels, or aircraft in the South China Sea would invoke US mutual defense commitments. And that is an unwavering commitment that we have to the Philippines.”

Thus said United States Vice President Kamala Harris to President Marcos Jr. during her courtesy call in Malacañang—words that have been spoken before by other American officials in one form or another.

But her unequivocal reassurance last Monday that the superpower would defend its ally in the event of military aggression by another party is just what the country needs in the face of an increasingly belligerent China.

It reinforces the oldest and one of only three US military alliances in Asia (the other two being mutual defense pacts with South Korea in 1953 and Japan in 1960) and sends a clear signal to Beijing which, in recent years, was hoping to drive a wedge between the Philippines and the US by capitalizing on the latter’s previous ambiguity regarding a key provision of the 1951 Mutual Defense Treaty.

In fact, for many years, this ambiguity as to whether the US would come to the aid of its former colony in the event of a conflict in the South China Sea has been a key source of uncertainty in Philippine foreign policy.

Filipino officials in the past were always worried that the lack of mention of the South China Sea anywhere on the document would be used by the US to renege on its commitment by citing the “letter of the law” if coming to the Philippines’ defense turned out to be inconvenient.

So great was this uncertainty that allegedly one of the most prized possessions in the vault of the Department of Foreign Affairs is a 1999 letter by the then US ambassador to the Philippines, reassuring that the South China Sea is covered in the treaty that specifies only the “Pacific Area.”

Former US state secretary Mike Pompeo gave similar reassurances in 2019, but one could be forgiven for worrying that such words would easily be countermanded or ignored by the volatile nature of then US President Donald Trump.

But Vice President Harris’ statement—coming from a key member of a presidential administration where both policies and pronouncements are better thought out—removes all doubt.

And because of this, Mr. Marcos is presented with a unique opportunity to maximize the benefits of the country’s refreshed, less ambiguous, and more equal relationship with the US for the mutual benefit of both nations.

The most obvious benefit is the potential of upgrading the Armed Forces of the Philippines with more current US military equipment to give the country a credible defense posture. But the Philippines should resist the temptation to be satisfied with surplus US equipment as in times past, which served only to deepen our dependence on our former colonizer.

An equally important benefit that the President should seize is the economic opportunity afforded by improved relations with the US. This means negotiating for better access for Philippine products and services in American markets, while using the reciprocity to improve the competitiveness of local output.

The government should also leverage this relationship toward improving the country’s energy security. If the Marcos Jr. administration does decide to pursue nuclear power for electricity, the US is one of the best sources of know-how for the safe and efficient use of this technology.

At the same time, food security in the Philippines could benefit greatly with the transfer of agricultural expertise from US to Filipino farmers.

Finally, good relations with the US will help smoothen the Philippines’ trek back into the fold of the community of nations from the near-pariah status the country gained no thanks to the previous administration’s brutal drug war and wanton disregard for human rights.

As for China, six years of kowtowing to Beijing by the Duterte administration yielded few tangible benefits. Indeed, accepting China’s so-called gifts served only to undermine the country’s position when it came to territorial issues. Chinese officials could simply ignore protests from a government that was also receiving Chinese loans and investments.

May he not squander this chance.