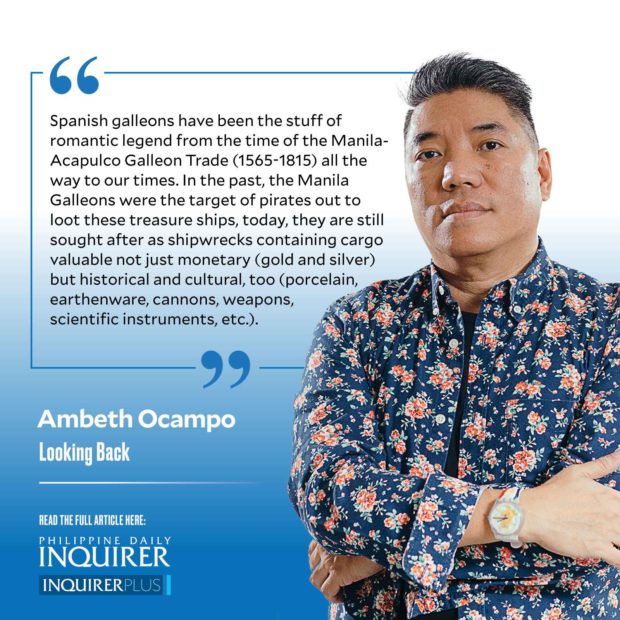 Spanish galleons have been the stuff of romantic legend from the time of the Manila-Acapulco Galleon Trade (1565-1815) all the way to our times. In the past, the Manila Galleons were the target of pirates out to loot these treasure ships; today, they are still sought after as shipwrecks containing cargo valuable, not just monetary (gold and silver) but historical and cultural, too (porcelain, earthenware, cannons, weapons, scientific instruments, etc.).

One of the important wrecks is that of the San Diego, which sank off Nasugbu during a battle to repel a Dutch invasion in December 1600. The National Museum used to have a dedicated San Diego exhibition with pieces chosen from over 34,000 artifacts recovered in 1992. Ming period blue-and-white porcelain represented trade with China, while Philippine-made earthenware represented the point of transit of the goods before their voyage to Mexico. The artifacts were a mute retelling of daily life in a galleon, from the comforts of the captain’s quarters to the cramped areas occupied by the sailors. Animal bones and seeds suggested what they ate, cannons, cannonballs. Weapons and ammunition told us how they fought. An astrolabe and compass told us how they navigated the high seas. For me, the most important artifact was not the largest or the most valuable in terms of market value: it is the small gold seal of Antonio de Morga, who commandeered the commercial vessel for the defense of the Spanish Philippines against the Dutch. Morga is best remembered as the author of “Sucesos de las islas Filipinas” (Events of the Philippine Islands) published in Mexico in 1609, reprinted and annotated by Jose Rizal in 1890.

Who was Antonio de Morga? He was born in Seville in 1559, graduated from the University of Salamanca in 1574, and in 1578 attained a doctorate in canon law. He taught briefly in Osuna, later returning to Salamanca to study civil law. He joined government service and was appointed in 1593 as lieutenant governor in Manila, the second most powerful position in the far-off colony, next only to the governor general of the Philippines. He resigned from this post in 1598 to assume the office of “oidor” or judge in the Royal Audiencia.

Like other historical figures, Morga’s fame or infamy depends on the account you are reading. In 1600, he was put in charge of the Spanish fleet against a Dutch invasion under Olivier van Noort. Although the Dutch eventually sailed away, the Spaniards lost heavily, and according to Morga, he had jumped ship and swam ashore with nothing but the enemy standard in his hand. However, the Dutch account of the battle described Morga hiding and crying in his flagship before it was sunk. Naturally, Morga’s reputation in the colony sunk like his flagship and, in 1603, he was transferred to Mexico.

A particularly malicious biographical note on Morga is provided by Wenceslao Emilio Retana in his three-volume “Aparato bibliográfico de la Historia General de Filipinas” (Bibliographic Apparatus for a General History of the Philippines) published in 1906. Retana cited a domestic scandal to comment on Morga’s character. Briefly, Juliana, Morga’s eldest daughter, was discovered in 1602 to be in love with a man of a lower social standing, a soldier from Mexico. Morga and his wife first tried to discourage the relationship by beating up Juliana, shaving her hair, and finally locking her up in the house. However, Juliana managed to escape from her parent’s house by tying bedsheets together and lowering herself from her bedroom window to the street.

When Morga discovered that his daughter had eloped, he brought in the governor general himself to persuade Juliana against marriage. They were all unsuccessful. Juliana silenced parental opposition by threatening to commit social suicide by marrying a negro if she was not allowed to marry her lover. Morga never spoke to his daughter again and left her in Manila when he moved to Mexico.

From Mexico, Morga was moved to Quito in 1615 to preside over the Audiencia. Again, Morga found himself in trouble, and in 1625 was investigated for corruption and eventually found guilty. He escaped humiliation, and the gallows, by dying in 1636, before the case wound up. Despite his checkered career and sketchy personality, Rizal regarded him as one of the best, most reliable historians of the Philippines.