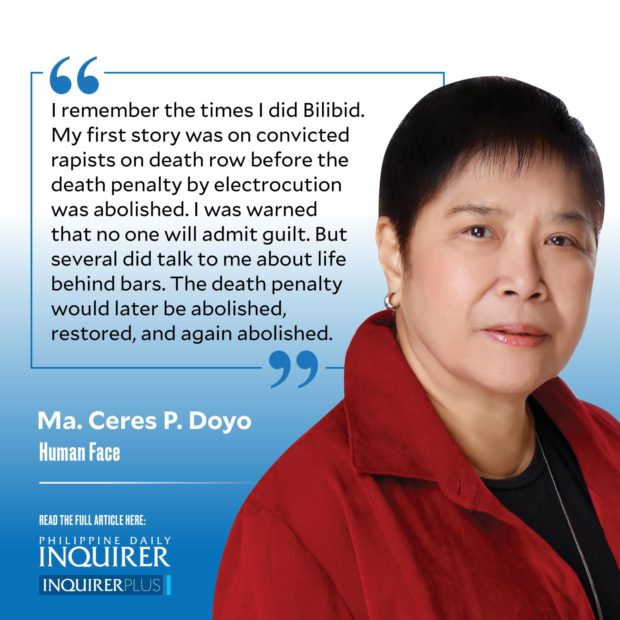 I can say that doing stories from the New Bilibid Prison (NBP) had been a privilege, if not an enriching experience for me.

Working journalists worth their salt and press IDs, sure have bragging rights added to what other bragging rights they have, if they had done Bilibid at any time during their reportorial years. Bilibid is the national penitentiary in Muntinlupa City (Munti to regular habitués), not the Old Bilibid Prison in Quiapo. (I had also been in the Iwahig Penal Colony in Palawan.)

Doing Bilibid means doing stories from where tens of thousands of prisoners, euphemized as persons deprived of liberty (PDL), are confined for the duration of their sentences. Bilibid stories are usually written by those in the justice and police beats. I was not a beat reporter. I was a magazine feature writer who also did investigative stories for the special reports section while also writing column pieces. Straight news reporting on unfolding stories like the latest goings-on in Bilibid (cadavers piling up, underground tunnels discovered, mysterious deaths, etc.) could give a beat news reporter a heady, adrenaline rush while beating a deadline. They are a special bunch.

Feature writers are allowed more time to dig deeper into the obvious what-where-when-how-why, to let the story percolate into a fuller brew. And so the need for more interviews, news sources, and bigger ears for what is said and unsaid, bigger eyes for what is seen and unseen. Find “Deep Throats” and secret documents and dalliances, if any, all in a complicated setting where human lives clash and intertwine.

With all the new complex skyways and expressways going south, I don’t know if I can drive and find my way to Bilibid like I used to, easily park in front of what looks like a medieval castle sans moat and drawbridge. One cannot miss the imposing towers with teeth-like crenellations that heritage conservationists might want to assess before it is too late.

What is inside is another story. I remember the times I did Bilibid. My first story was on convicted rapists on death row before the death penalty by electrocution was abolished. I was warned that no one will admit guilt. But several did talk to me about life behind bars. The death penalty would later be abolished, restored, and again abolished.

Fast forward to February 1999. I was with an Inquirer team that covered the execution by lethal injection of convicted child rapist Leo Echegaray, the first since the restoration of the death penalty under the Estrada administration. There was a drawing of lots for a seat in the viewing chamber, and although the Inquirer did not get a seat, we were covering anyway.

Reporters camped out for the night on Bilibid grounds. When the day dawned, it was pandemonium as reporters outdid each other to get the latest from prison officials. At 3 p.m., Echegaray was pronounced dead.

Months later, the Inquirer got a seat for the June 1999 execution of Eduardo Agbayani, convicted for raping his daughters. I had the grim privilege of watching the execution from behind a glass panel. We were allowed to carry only a notebook and pen. I was seated behind Agbayani’s sobbing daughter. Via the sound system, we could hear the convict’s fading voice while the lethal injection was taking effect. I saw Agbayani’s face fall toward the side where we were seated.

The doctor announced the convict’s time of death. Then a loud cry: “Stop! Stop!” The curtains were drawn, and we all rushed out to find out what happened. President Estrada, it turned out, heeded Bishop Teodoro Bacani’s plea for a stay of execution, but the call from Malacañang came too late. What a story it was.

My last visits to Bilibid were in 2003 to interview the 10 so-called Aquino-Galman convicts, the military men who escorted Sen. Ninoy Aquino while disembarking from the plane that brought him back from exile in the US on Aug. 21, 1983. Aquino was shot dead before he could step on ground. So was Rolando Galman, who was first tagged as Aquino’s gunman.

At that time, the convicts had been in prison for 20 years. To interview them, I had to ask for a written consent from the Department of Justice. I went to Bilibid almost every day for several days. I even had photos of myself with them.

My series came out in the Inquirer in time for Ninoy Aquino’s 20th death anniversary in 2003. Doing the story was exhausting, but it was worth it. Not long after, I learned that one of the ten was stabbed to death. The last of them were freed in 2009.

One of the Bilibid finds that I had photographed was a rough white statue of Jesus the Good Shepherd beside the prison chapel. A shepherd looking up and with pain on his face, so unlike many that I have seen.