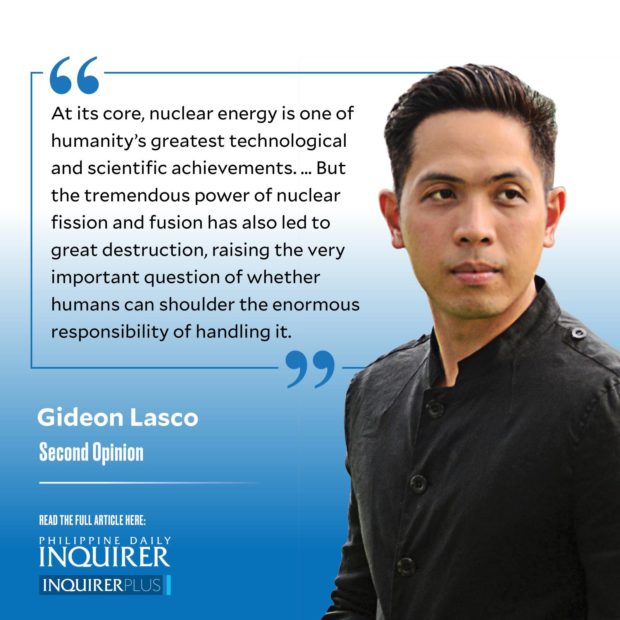 At its core, nuclear energy is one of humanity’s greatest technological and scientific achievements. Harnessing the power of atoms involved building on a series of groundbreaking scientific discoveries and technological breakthroughs, from Einstein’s theory of relativity to the Curies’ pioneering work on radioactivity; from advances in our understanding of atomic structure by the likes of Ernest Rutherford, James Chadwick, and Niels Bohr to the chain reaction experiments by the likes of Leo Szilard and Enrico Fermi, who would be ultimately hailed as the “architect of the nuclear age.”

But the tremendous power of nuclear fission and fusion has also led to great destruction, raising the very important question of whether humans can shoulder the enormous responsibility of handling it. Within decades of Einstein and Szilard’s 1939 letter to Franklin Roosevelt warning of the dangers of nuclear energy’s weaponization, humanity faced—for the first time ever—the very real possibility of annihilation by our own hands. As it would emerge later on, there were moments during the Cuban missile crisis when our fate hung by the decisions of a few good men.

And of course, the bombings of Hiroshima and Nagasaki were real-life demonstrations of the epic destruction by a single weapon. Five years after attending the commemoration of the second bomb in Nagasaki, I am still haunted by the accounts of the hibakusha (atomic bomb survivors) who recounted the horrors they suffered, including the stigma they endured.

Since 1945, the destructive power of nuclear energy became even greater, but it has also been put to peaceful use; today there are over 400 nuclear reactors in over 30 countries, providing reliable, low-carbon footprint electricity. Its exponents have also touted its overall excellent safety profile, but as Chernobyl in 1986, Fukushima in 2011, and Chernobyl again just this year show, there are spectacular risks involved, both from natural disasters and human error—not to mention the threat of war or terrorist attack.

In the Philippines, adding a layer to the politics and symbolism of nuclear energy is its association with the Marcos regime. Plagued by reported kickbacks and mothballed over post-Chernobyl safety concerns, Bataan Nuclear Power Plant, with its final cost of over $2 billion, symbolizes the corruption, the wastefulness, and the enduring damage of the Marcos regime, given that taxpayers had to pay for a useless plant for decades.

For many Marcos supporters, on the other hand, it continues to symbolize the techno-scientific, modernist vision of an imagined past “golden age.”

All of these elements—the science, the symbolism, and the politics—are germane as President Marcos Jr. renews the call for nuclear energy as part of what he called “improving the mix of the energy supply between traditional and renewable sources” during his first State of the Nation Address (Sona). Actually, even during the Duterte years, there has been some push toward this direction, and early this year, Duterte released an executive order calling for a nuclear energy program, in which he also cited popular support for such a move.

The present circumstances—rising fuel costs and the presidential bid to rehabilitate the Marcosian past—seem to be bringing a critical mass to finally taking the nuclear option.

Notably, however, Mr. Marcos refrained from mentioning Bataan in his Sona. “We will comply, of course, with the International Atomic Energy Agency regulations for nuclear power plants as they have been strengthened after Fukushima,” he said, alluding to “new technologies developed that allow smaller scale modular nuclear plants.”

The president’s caveats are not enough to overcome the concerns of various sectors—from environmentalists to economists—who cite the steep upfront cost, the challenge of handling nuclear waste, the regulatory stability required, as well the enduring concerns both universal and particular to our country, from earthquakes to terrorism.

Personally, I have no fundamental objections to nuclear energy and to supporting local capacity for nuclear research and development, especially, if in the future, safer technologies are developed that will lower its overall environmental costs—from uranium mining to radioactive waste disposal—as well as its security and safety risks.

Until and unless that happens, however, I think that we are better off harnessing existing sources of power that are much greener, safer, and increasingly cheaper—including one that is incidentally powered by nuclear energy: the sun.